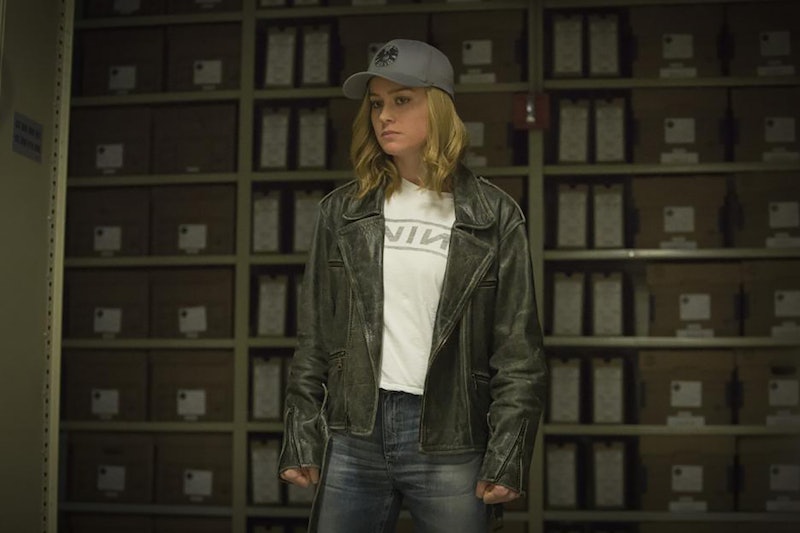 There have been many Marvel superheroes on the big screen over the past 10 years, but Brie Larson will forge a new path when Captain Marvel hits theaters next spring. As the first female-led Marvel movie, Captain Marvel is a huge step forward for onscreen representation for women, especially in the comic book genre. So it makes sense that Larson hit up her fellow Avengers for advice on how to be the best superhero she could be.

When Marvel gathered every superhero and villain from the last decade of films for a giant 10-year anniversary class photo earlier this year, Larson didn't take the opportunity for granted. Surrounded by her new family, she found herself getting "emotional" as she had everyone sign a book she brought to the studio.

"I was just really grateful that they were so generous and so excited about me joining [the family], and so open to answering my questions," Larson tells Bustle and other journalists on the Captain Marvel set. "I brought a book with me and had them all sign it by giving me superhero advice ... all of those people from that day, all of us were doing it. We all had books."

So what kind of superhero advice did she get from her fellow Avengers? "I mean, most of them are really practical: 'just don’t forget to drink water,'" she gives as an example. "And a lot of them too were just like, 'You don't need my advice,' which I think is really sweet, too."

And they're right. Relaxing on set in her Captain Marvel suit, Larson sips from a plastic pineapple cup and thinks back on her nine months of training to play Carol Danvers.

"I knew I was doing an action movie and I knew that a movie like this was going to feel like a triathlon, and I wanted to be ready for it," she says. "I wanted to be as prepared as possible, so I wasn’t fighting being fatigued or my body hurting, that I was as resilient as I could possibly be."

Captain Marvel aka Carol Danvers is widely known as the strongest Avenger, and she's going to be the key in stopping Thanos in the upcoming Avengers 4. Captain Marvel serves as her origin story, and takes place in the '90s. With a post-credits scene in Avengers: Infinity War teasing her debut, Larson knew how important it was to show Carol's strength in this film and her intense training ensured that she could.

"I knew that if I could go through that experience I would get closer to her; I would understand and you can get to a point where you’re just being, even just you sitting there, could feel really strong, rather than acting strong," Larson says. "I didn’t know what strength was, and I truly [had] asthma before this film, so I had a lot of work to do."

As an outspoken feminist, Larson says she previously tried to keep her focus off of her body, so to all of a sudden have such a love for it surprised her. "In the past I was more interested in my body never being part of a conversation," she says. "To me it felt like objectification, and I just wanted to be a brain, so I’ve only cared about reading books and understanding words. Anything that involved my body ... it made me itchy. But this was an opportunity to me to take back and make my body mine."

While Carol is Marvel's first female superhero star, she's joining a growing team of actors who've been on this same journey. So you can imagine her surprise when she learned that she was going above and beyond how much training other actors had done before her.

"It wasn’t until we started filming and I started doing this stuff, I started doing crazy stunts, that people were like, 'Oh by the way, no one does this,'" Larson says with a laugh. "No one really wanted to tell me that that was the case ‘cause they were like, 'I don’t know why she’s doing this but it’s cool, like whatever, just let her do it.' It was ignorance more than anything else."

But Larson doesn't regret it one bit. "I’ve found [training] really empowering," she says. "Knowing that I put in nine months of real hard work, three months of it were like four and a half hours of training a day, it was like I was training for a marathon. If I was seeing this movie, I think it would mean so much more to me knowing that there was that type of dedication put into it, and that it’s not just, 'Girls are strong with CGI.' It’s, 'Girls are strong.'"

More like this
Kukulkan From 'Wakanda Forever' Has A Surprising Connection To Marvel History
By Grace Wehniainen
Netflix Shut Down 'Bridgerton' S3 Rumours About A “Very Dark” Storyline
By Bustle
At 28, Rosie Perez Risked Her Career To Stop Playing Stereotypes
By Gabrielle Bondi
'The Queen’s Gambit' Season 2 Tweet Wasn’t From Anya Taylor-Joy
By Mary Kate McGrath, Jack Irvin and Grace Wehniainen
Get Even More From Bustle — Sign Up For The Newsletter
From hair trends to relationship advice, our daily newsletter has everything you need to sound like a person who’s on TikTok, even if you aren’t.