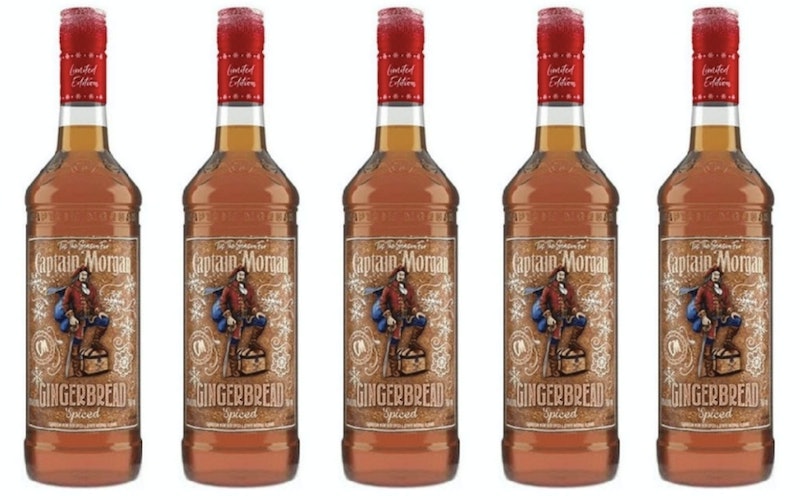 This holiday season, settle for no less than whatever Santa's got the elves putting in his hot chocolate as a mixer. I imagine it is none other than Captain Morgan's Gingerbread Spiced Rum, which, thankfully for both you and ole St. Nick, has already been spotted on shelves for 2019. Instagram account @foodiewiththebeasts spotted the seasonal flavor out in the wild, and a quick Google search confirms that you can, in fact, already start getting gingerbread lit.

Per the description, the rum is "distilled with the sweet and warming taste of fresh gingerbread." Its listing on Cask Cartel further elaborates that it has "Notes of rich Gingerbread, brown sugar, dried fruit," as well as "Warming spices with hints of oak," which are two phrases that made a frankly embarrassing amount of drool pool in my mouth. At the risk of cheating on Halloween, you can already order it on Drizly for $21.99. Just a heads up that despite all these dessert-related words spinning dreams of cookies and gumdrops in your head, it is still very much a rum, and has a 35% ABV — so jazz up your hot cocoa responsibly. Or your coffee, or your tea, or — dare I suggest — your Chestnut Praline Latte? (Assuming Starbucks brings it back this year — bottles and prayers up.)

The Instagrammer who spotted it found it at Jayco Liquors, but it appears you can also find it at Total Wine, Cask Cartel, and the Drizly link above. Now that I've further fulfilled my long-running destiny of letting the public know about dessert-flavored liquors, you should also note that this is a limited edition flavor, so you might want to look for it sooner than later. Unless you're still on that Jack-o-Blast beat, which, no judgment — Captain Morgan's pumpkin spiced rum is arguably superior to most pumpkin spiced things, which this adult woman can confirm after purchasing a little airplane nip of it and drinking it on ice while watching Halloweentown alone the other night. (Be the unrepentant pumpkin spice monster you want to see in the world!!)

Anyway, this ought to keep our bones warm through the winter, until the buds burst up through the snow and we all know that it's officially Watermelon Smash and Apple Smash season once more. We can all cheers some boozy hot cocoa to that.