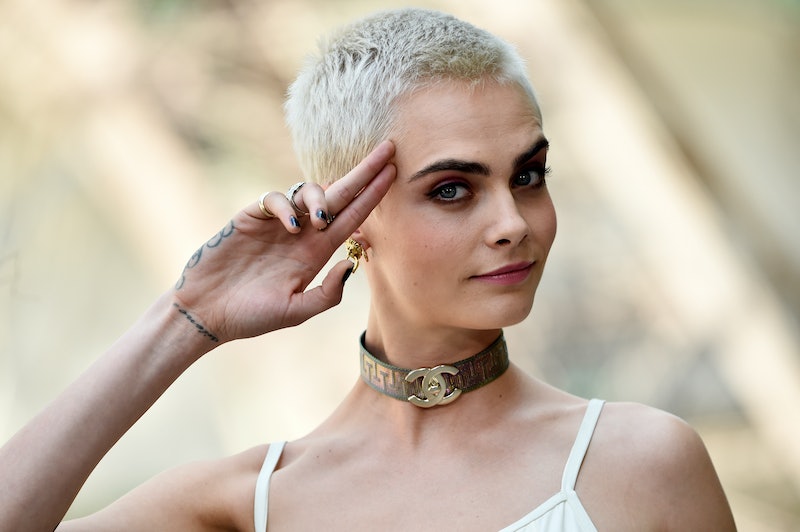 Transition from one job to another can be a bit of a pain, to say the least. Especially if you're a household name. Yet Cara Delevingne has made the move from supermodel to actor/TV personality look like an absolute breeze. And considering how fun the star seems to be, the news that Cara Delevingne is hosting an all-female prank show is music to my ears. But what else do we need to know about the new series?

Delevingne is all geared up to host the show, along with having an executive producer role on the project. Variety reports that each episode will see her and a ragtag bunch of female accomplices "wreak havoc." Sounds grand. And all of this cheeky AF behaviour will get them in some "unwieldy and unpredictable situations in the process."

The show is being made from Quibi TV, which is an all-new short-form online streaming platform. Basically creating output that says "quality over quantity" when it comes to content. It's sure to serve up top shelf entertainment and, according to E!News, they have big names like Steven Spielberg, Sophie Turner, and Zac Efron on board fr some upcoming shows. So you know it's going to be lit.

I contacted Quibi for info on the title of the show and when we might expect to see it, and will let you know as soon as I've heard back.

According to Variety, Delevingne is super psyched to be getting in on the action on this brand spanking new platform. The model said:

"I am so excited to be partnering with such a revolutionary streaming service like Quibi and cannot wait to unleash some necessary mischief. As someone who watches so much content on my phone, this feels like such a perfect partnership."

The show is being made by ITV America's Sirens Media, and the company's president Jessica Sebastian will also be an executive producer. Variety reports that, according to Sebastian, this level of female-produced, -led, and -hosted show is kind of a whole new and revolutionary thing:

"As far as I know, a series in this space with this level of female guidance and representation, both in front of and behind the camera, is unprecedented, and we're ecstatic to bring this new take on the genre to the ideal platform in Quibi."

Mainstream streaming platforms, TV networks, and production companies are increasingly opening their eyes to how funny women truly are, and how much female talent there is out there. Look at shows like Channel 4's Gameface and Derry Girls. Or the BBC's smash hit Fleabag. Long may it continue because, you guys, it's about flipping time.

More like this
This Pre-'Love Island' Video Of Olivia & Zara Together Changes Everything
By Bustle UK
A New Netflix Doc Will Explore The Unsolved Murder Of Jill Dando
By Sam Ramsden
Every Season Of 'Love Island' Ranked Best To Worst
By Alice Broster, Frances Stewart and Sophie McEvoy
Twitter Can’t Make Up Its Mind About Ekin-Su’s 'Dancing On Ice' Skate-Off
By Sophie McEvoy
Get The Very Best Of Bustle/UK
Sign up for Bustle UK's twice-weekly newsletter, featuring the latest must-watch TV, moving personal stories, and expert advice on the hottest viral buys.