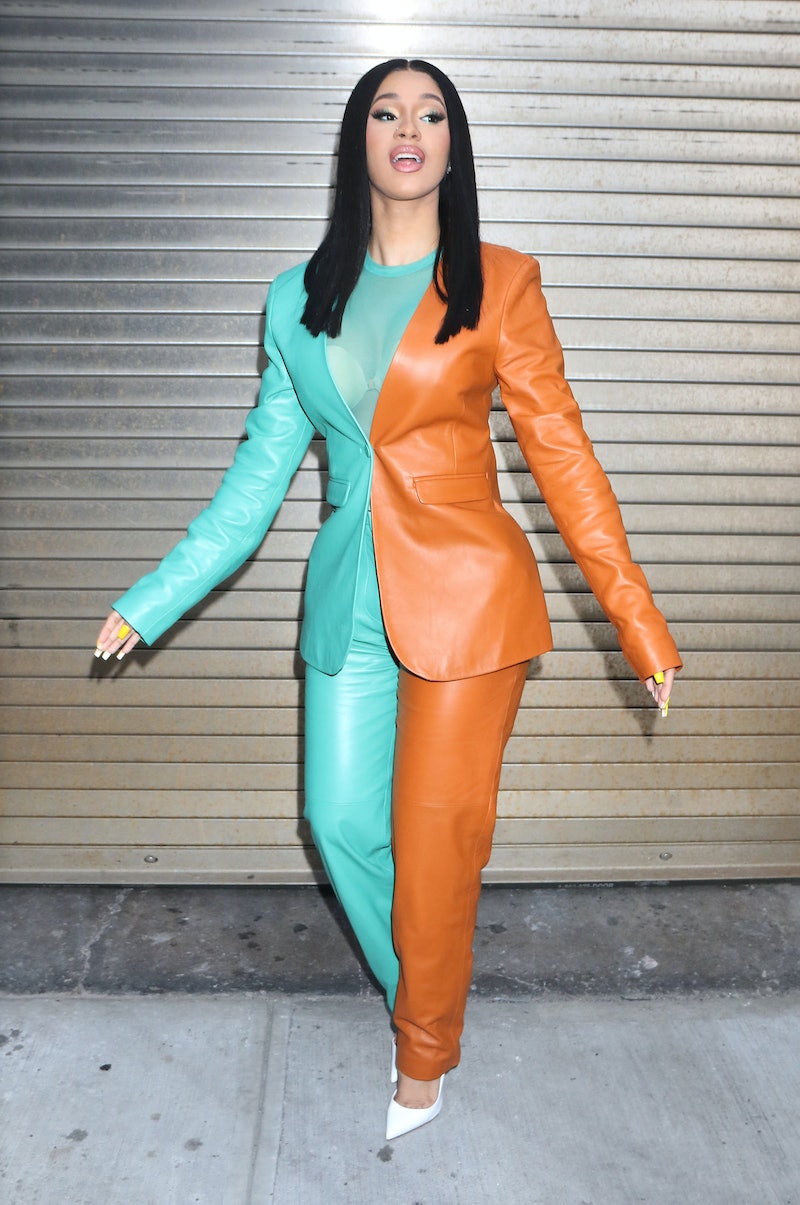 Magazine covers are not just a place to break news, but it's also a place to feature those who break barriers. It makes sense then that Cardi B is gracing Vogue's latest cover along with her daughter Kulture. Cardi is just one of several other famed mothers posing alongside their children on the covers of the fashion magazine for the month of January. Vogue also featured Ashley Graham, Greta Gerwig, and Stella McCartney, fellow mothers (or in Graham's case, mother-to-be).

Cardi has already been slaying the game and breaking records since before her album “Invasion of Privacy” dropped and became the first woman-made project to win Best Rap Album at the Grammys. Now, the star from the "Boogie Down Bronx" has become the first female rapper to be featured on a Vogue cover.

The shoot, which was photographed by storied photographer Annie Leibovitz, features Cardi in head-to-toe red, wearing a polka dot Michael Kors Collection dress and matching red Jimmy Choo shoes. The rap star looks naturally glam, with her curly, wet locks and edges laid to perfection. While Cardi looks absolutely stunning and put-together on the cover, in her interview with the magazine, the rapper describes having to grapple with the ups-and-downs of balancing super stardom while also being a mother and wife.

While this is a huge accomplishment, the rapper hasn't shared the achievement on social media yet. Perhaps she's too busy working on her next album. In a Twitter video she posted on Nov. 25, Cardi explained how she hadn't been "on the scene" for a while after she'd missed receiving her AMA and Soul Train Awards. She did, however, admit that she had been "busting her a** in the studio." Cardi revealed in her interview with Vogue how anxious she is to top the success of her first album, being that she was the first female rap artist to have a hit number one song since Lauryn Hill's "Doo Wop (That Thing)."

“I didn’t even care if people was gonna like it or not," she told Vogue. "When I found out I did so good, I’m like, is this a big number? Everybody was like, 'yes, this is a huge number.' So it’s scary because it’s like, now you got to top your first album, and then it’s like, damn. I wonder if people are gonna relate to the new things, to the new life, to the new sh*t that I gotta talk about now."

With one of those "new" things being motherhood, Cardi opens about how difficult it is to manuever life as a mom, wife, and celebrity, all while maintaining her relatable Bronx-based personality and humor. But in the interview, she reiterates that being a mom is what brings her back to why she does her job in the first place.

“Being a mom — how can I say it? Things are a little bit harder to balance, but it’s good for the mental," Cardi shared. "Like, if I’m playing with my daughter, I forget about the issues.”

To read the rest of her interview with Vogue, click here.

More like this
42 Black Owned Fashion & Beauty Brands To Support Today & Always
By Mekita Rivas, Shea Simmons, Kui Mwai and Dominique Norman
24 History-Making Black Women You Probably Didn't Learn About In School
By Ayana Lage and JR Thorpe
Hailee Kaleem Wright's Topsy-Turvy Path From MTV To Broadway
By Samantha Leach
This 'One Tree Hill' Wardrobe Error Is Going Viral On TikTok
By Brad Witter
Get Even More From Bustle — Sign Up For The Newsletter
From hair trends to relationship advice, our daily newsletter has everything you need to sound like a person who’s on TikTok, even if you aren’t.