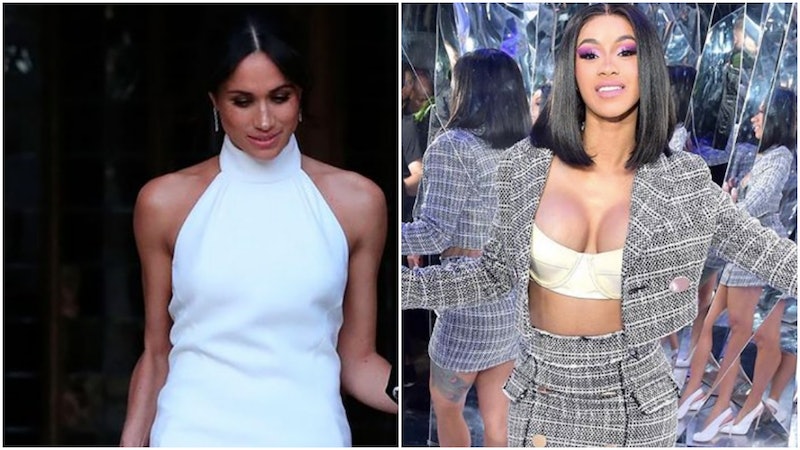 If you spent any time on Instagram last year (which, duh, of course you did), you know Cardi B's Fashion Nova collection sold out in hours and the Duchess broke royal protocol left and right. So it only makes sense that the biggest Poshmark fashion influencers of 2018 were Cardi B and Meghan Markle, according to Poshmark's Social Commerce Report.

What makes these two opposite icons for fashion is that both are fairly new to their positions in the spotlight, yet they've paved a way for themselves in almost no time. Fashion Nova is already the reigning champ for most searched fashion brand of 2018, according to Google. But ever since Cardi began partnering with the popular fast fashion site, Poshmark reports purchases on the secondhand platform's site are up 210% for the brand. If that's not star power, then what is?

As far as the Duchess of Sussex is concerned, she also needs no help in becoming an influencer of her own. Markle has a track record of consistently wearing a pair of Aquazzura "Deneuve" Black Bow Pointy Toe Pumps to royal get togethers, causing the brand's sales on Poshmark to grow by 150%. Let's be real though, anything the Duchess wears or swears by is something worthy of peek.

Cardi B was never a stranger to Fashion Nova as she'd been wearing the brand and plugging its name at the start of her career, which is probably why her fans value her opinion on the fast-fashion brand so much. The rapper always mentioned in posts on Instagram that Fashion Nova was one of the few retailers who carried jeans to fit her curvy body, and calling out other brands that still need to make improvements.

The rapper-turned-businesswoman created a successful collaboration with the brand in an exclusive line to put out clothes that one would see on higher end fashion runways. The Cardi B collection sold out in no time.

"My inspiration was 'RUNWAY', what are things I will see on the runway," she wrote in an Instagram post from last year. "YSL, Moschino, Gucci, Mugler, Chanel Balmain. Fashion to me is not always tight dresses and tights, it’s about STATEMENTS!!"

What is happening south of the Duchess' ankles, you ask? They're the previously mentioned Black Bow shoes that Meghan Markle can't seem to get enough of. No, seriously.

Markle wore these back in June of 2018, but she also wore them all throughout the summer.

Markle was spotted in them again when she and hubby Prince Harry attended the Dublin Garden Party.

When one can count the days the Duchess wore a cute pair of shoes, they're clearly of fave of hers, and no wonder. Look at that lil bow!

Despite Markle being the epitome of poise, she still manages to influence the young Nova Babes, too. Fashion Nova replicated Meghan Markle's wedding reception dress, nearly selling out within hours of its arrival to the site. Go figure.

Regardless of the fact that these two fashion icons are polar opposites, they're both royalty in their own right. And Poshmark sales prove it.