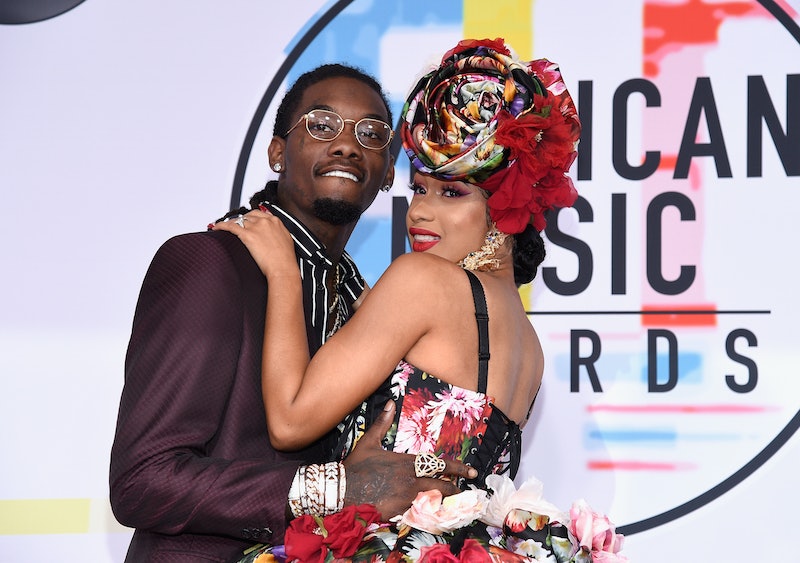 There could be a reunion in the works for Cardi B and Offset, which would come only a couple of months after the pair first announced their split. As ELLE reported, Cardi B and Offset may be back together — but there are apparently some conditions to go along with this possible reconciliation.

According to TMZ, the couple has reportedly reconciled, with Cardi returning to live in the Atlanta home that they shared prior to the split. As the publication reported, Offset has supposedly made a couple of changes to his lifestyle to show his wife that he's serious about their reunion. The Migos rapper has reportedly changed his phone number, which is now only to be used to contact Cardi or take business calls. TMZ also reported that there's a "no groupies" rule in place, because he wants the "I Like It" singer to know that he's dedicated to making their marriage work.

Now, if it's true that Cardi and Offset are back together, that would definitely be a major update for the couple. In case you missed it, the "Money" singer previously took to Instagram in early December 2018 to let her fans know (in a since-deleted video) that she had split from her husband after a year of marriage.

At the time, Cardi reportedly said, “So everybody been bugging me and everything, and you know I’ve been trying to work things out with my baby father for a hot minute now." She continued to say in the video that they will always be on good terms, especially as they share a daughter, Kulture, together:

"And we’re really good friends and you know, we’re really good business partners — you know he’s always somebody that I went to to talk to, and we got a lot of love for each other but things just haven’t been working out between us for a long time and it's nobody's fault. It's just, like, I guess we grew out of love. But we're not together anymore. I don't know, it might take time to get a divorce and I'm gonna always have a lot of love for him because he is my daughter's father and, yeah.”

Shortly after their split was announced, Offset tried to win his wife back by making an extremely misguided attempt at a grand gesture when he crashed her headlining set at the Rolling Loud Festival on Dec. 15. During her set, the Migos rapper took to the stage with cakes that read, "Take Me Back Cardi." He also apologized and said, "I just want to tell you I'm sorry, bruh. In person. In front of the world. I love you." Although, Cardi wasn't exactly down with the move, as she appeared to be anything but pleased during the set-crashing moment.

In late December, the on-again, off-again couple was spotted together during a jet-setting vacation in Puerto Rico, which sparked rumors that their romance was back on. However, Cardi later clarified on Instagram that their outing did not mean that they were back together, per Billboard.

Now, it appears that Cardi and Offset may be officially back on, according to TMZ's latest report. But, until the couple clarifies the situation for themselves (likely on Instagram), fans will simply have to wait and see whether they've truly reconciled.