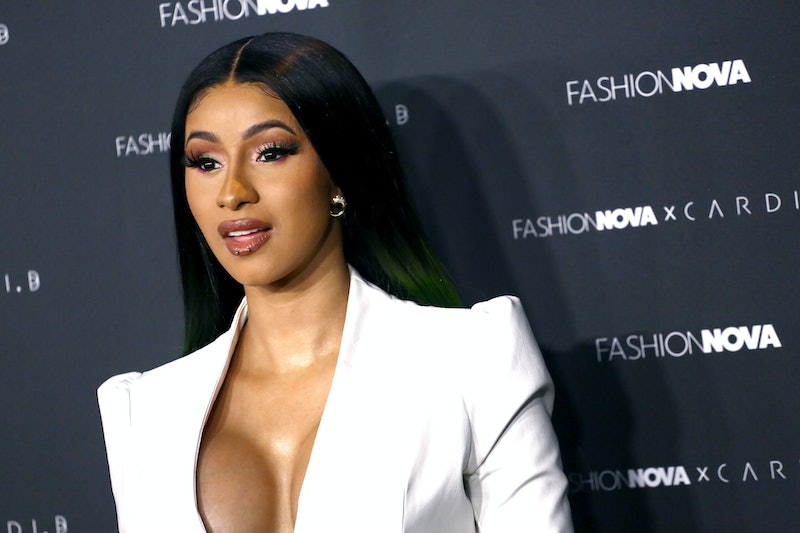 There might be a stereotype that women in show business are always competing against each other, but when it comes to defending women in hip hop, one rapper is more than ready to stand up for her sisters. On Friday, July 12, Cardi B stood up for female rappers after Jermaine Dupri called them "strippers rapping," in a recent interview. Not only did she push back against Dupri's comments, she also gave shout outs to a few of her fellow female rappers who she felt deserved more attention from the media.

In response, Cardi B posted a video on Twitter firing back at Dupri and other critics, saying that female rappers often rhyme about sex because, "it seems like that's what people want to hear. I'm not even gonna front."

Recalling the response she got when she released "Be Careful," Cardi explained, "People was talking mad sh*t in the beginning, like 'What is this, this is not what I expected, I expected this, I expected that.'" After that reaction, the rapper explained that she decided to then give the people what they wanted: "If that's not what people are trying to hear, then alright, I'm just gonna start rapping about my p*ssy again."

In addition to explaining that the same female rappers who are being criticized for talking about sex in their music are just trying to make records that sell, Cardi also addressed another major issue in the music industry. Namely, the fact that there are many female rappers who are innovative, creative, and not talking about their bodies in their work, but who aren't getting any radio play or support from the media.

"There's a lot of female rappers that are rapping their ass off — and don't be talking about ... getting down and dirty — and y'all don't be supporting them," Cardi said, pointing her finger at the camera. "These bloggers don't support them, they don't give them the recognition, so don't blame that sh*t on us when y'all [are the ones who aren't] supporting them."

To further underline her point, Cardi posted another video on Instagram a few hours later, listing off some of the female rappers who she feels deserve more recognition and appreciation from rap fans and critics everywhere. "Let me tell you about some rappers that are really f*cking dope, that are rapping their asses off, that I don't feel they get the recognition they deserve," she began, citing Tierra Whack, Kamaiyah, Rapsody and newcomer MC Chika as some of her favorites right now.

"I feel like we need to put these girls more in magazines, and [on] blogs," she said, calling out the latter specifically to throw their support behind those female MCs. "I know y'all are watching this, put these girls on your blogs. Radio DJs, y'all need to hear these girls, you need to play their music on the radio."

Cardi has always been outspoken about her experience as a stripper, and she's emphasized her refusal to let others judge her for it. Furthermore, Cardi has made it a point to always stand up for other women, especially because she believes that most traditional definitions of "feminism" leaves women like her out. There really isn't anyone better than her to stand up to the idea that female rappers are worse or less compelling than their male counterparts.

Now, let's just hope that those with power in the industry listen to what she has to say.