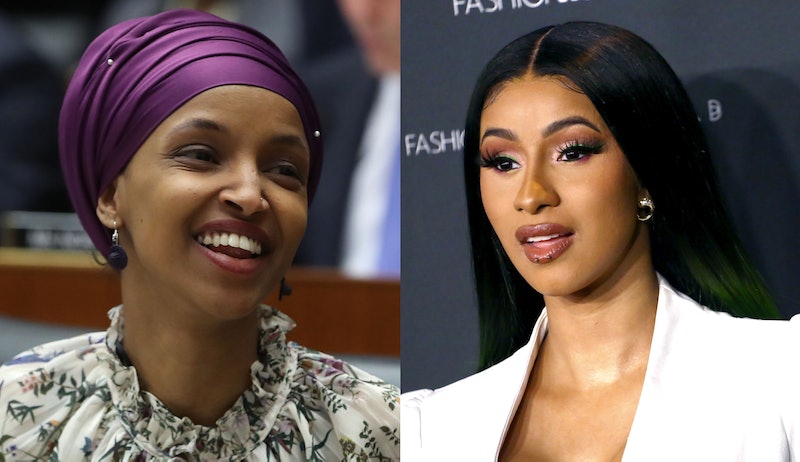 In the midst of President Trump's recent verbal attacks on several members of Congress, some celebrities are speaking out in defense of those congresswomen. On her Instagram, Cardi B defended Ilhan Omar after Donald Trump's offensive remarks, and she did so with a little help from Beyoncé.

On July 17, Cardi posted a photo of Omar flashing a big smile in order to show her support for the politician, who has been a target of Trump's vitriol (both via Twitter and at his rallies). The rapper captioned the photo with a line from Beyoncé's "Formation," as she wrote, "You know you that b*tch when you cause all this conversation 💁🏽‍♀️." Between the choice of photo and the caption, the "Money" singer's post serves as a strong defense for Omar in the wake of an exhausting and frustrating news cycle.

Just as Cardi (and Beyoncé) put it, it's certainly true that Omar has been a big topic of conversation, particularly for the president. On July 14, Trump took to Twitter in order to address "Progressive Democrat Congresswomen," whom he told to "go back" to to where they came from. While he did not name them specifically, his tweet was seemingly directed at a specific group of Democrats, all of whom are American citizens — Omar, Alexandria Ocasio-Cortez, Rashida Tlaib, and Ayanna Pressley — who have spoken out against the Trump administration's immigration policies.

"So interesting to see 'Progressive' Democrat Congresswomen, who originally came from countries whose governments are a complete and total catastrophe, the worst, most corrupt and inept anywhere in the world (if they even have a functioning government at all), now loudly [...] and viciously telling the people of the United States, the greatest and most powerful Nation on earth, how our government is to be run. Why don’t they go back and help fix the totally broken and crime infested places from which they came. Then come back and show us how [...] it is done. These places need your help badly, you can’t leave fast enough. I’m sure that Nancy Pelosi would be very happy to quickly work out free travel arrangements!"

On July 16, Congress voted to condemn Trump's racist remarks, as CNN reported. But, as if that wasn't enough, the president once again spoke out against the four congresswomen, and specifically Omar, during a rally held in North Carolina on July 17. The crowd chanted, "Send her back" in reference to Omar, who was originally born in Somalia and became a naturalized United States citizen, as CNN once again noted. The publication reported that Trump made no effort to stop the chanting.

It shouldn't come as a surprise to see that Cardi has recently voiced her support for Omar on Instagram, especially after these recent, incredibly harmful comments. As ELLE noted, the rapper has long been outspoken about where she stands when it comes to politics and, particularly, how she feels about Trump.

In an interview with Rolling Stone in June 2018, she made her feelings about the president and his administration very clear. Cardi said,

"Every artist has explained how harmful he is. He has made divisions in this country–he almost made a crazy civil war between the blacks and the whites. He has proven himself to be a madman so many times, and proven himself to be disrespectful to women, and that still hasn’t gotten him impeached."

As you can see, Cardi is not here for any of the vitriol Trump continues to spew. So, when it comes to supporting those who have been unfairly attacked by the president, you can definitely count on the singer to speak up for what she believes in.