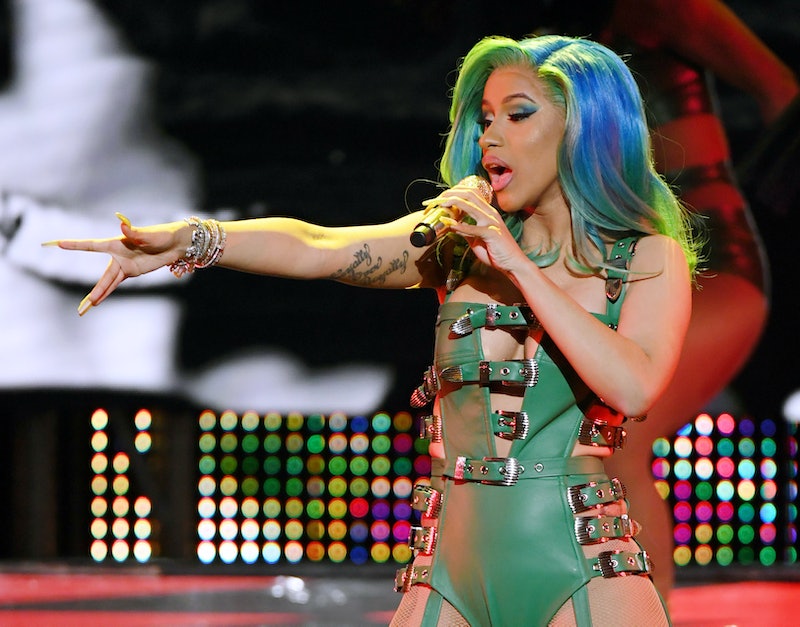 Regardless of how people may feel about Cardi B’s music, no one can accuse her of not being honest. The entertainer, who is extremely candid on her social media accounts, recently tweeted about how anxiety is “kicking [her] ass” to her nearly five million followers. Celebrity or not, being vulnerable on the Internet is often a risk, especially on platforms like Twitter where trolls run rampant. But in a refreshing turn of events, the response in Cardi’s case has largely been positive. Proving that the Internet can occasionally be a force for good, fans and celebs alike are rallying around Cardi B after she tweeted about her anxiety, sending her messages of support and solidarity.

The responses to Cardi’s tweet have ranged from sincere affirmations of support to suggestions of coping methods like meditation and deep breathing. Celebrities including rapper Missy Elliott, comedian Sarah Silverman, and WWE wrestler Sasha Banks also responded to the tweet, chiming in with how they related to her message. Of course, this wouldn’t really be Twitter without the occasional hilarious (yet still uplifting) reply, reminding the entertainer of her own self-proclaimed resilience.

Even though the year has barely begun, it’s already been a big one for the star. She’s nominated for five awards at Sunday’s Grammy Awards, where she’s slated to perform, and recently confirmed via Instagram that she hopes to come out with another album this year. But the rapper, who alluded to her anxiety in an April 2018 profile for GQ, isn’t immune to the pressures of fame. Last April, she spoke about her increased anxiety after her quick ascent to super stardom on the radio show Sway in the Morning.

"To me, it’s not been easy writing. This has been the hardest thing ever. It’s not easy to focus on a song because the type of pressure everyone has put on me. Like, at first when I was doing music it was fun and I was so eager to get in the studio all the time. Now, I get anxiety when I go to the studio because everybody is like expecting some crazy magic from me," she said on the radio show.

More recently, she mentioned feeling pressure and anxiety for her second album based on the success of her debut one in a December Instagram post. Cardi’s also expressed her own sentiments of solidarity with “Taki Taki” collaborator Selena Gomez, who was hospitalized last October for mental health treatment. The rapper told E! News shortly after the incident: "I just want to let her know, Girl, you're beautiful, you're rich and hold on because even sometimes I feel like I'm losing my mind. I just got to pray hard to God and get away from social media."

Cardi added that she coped with these feelings by surrounding herself with people who love her and by turning to prayer. “Sometimes I go to my grandmother's house and I stay there for two weeks because they uplift me," she told E! News. "Sometimes I go upstate to my family's house and they pray for me. We do prayers for a full two hours and I feel uplifted."

While Cardi B hasn't gone on record saying she has a diagnosed anxiety disorder, her frankness about experiencing anxiety in general helps remove some of the stigma around having honest conversations about mental health.