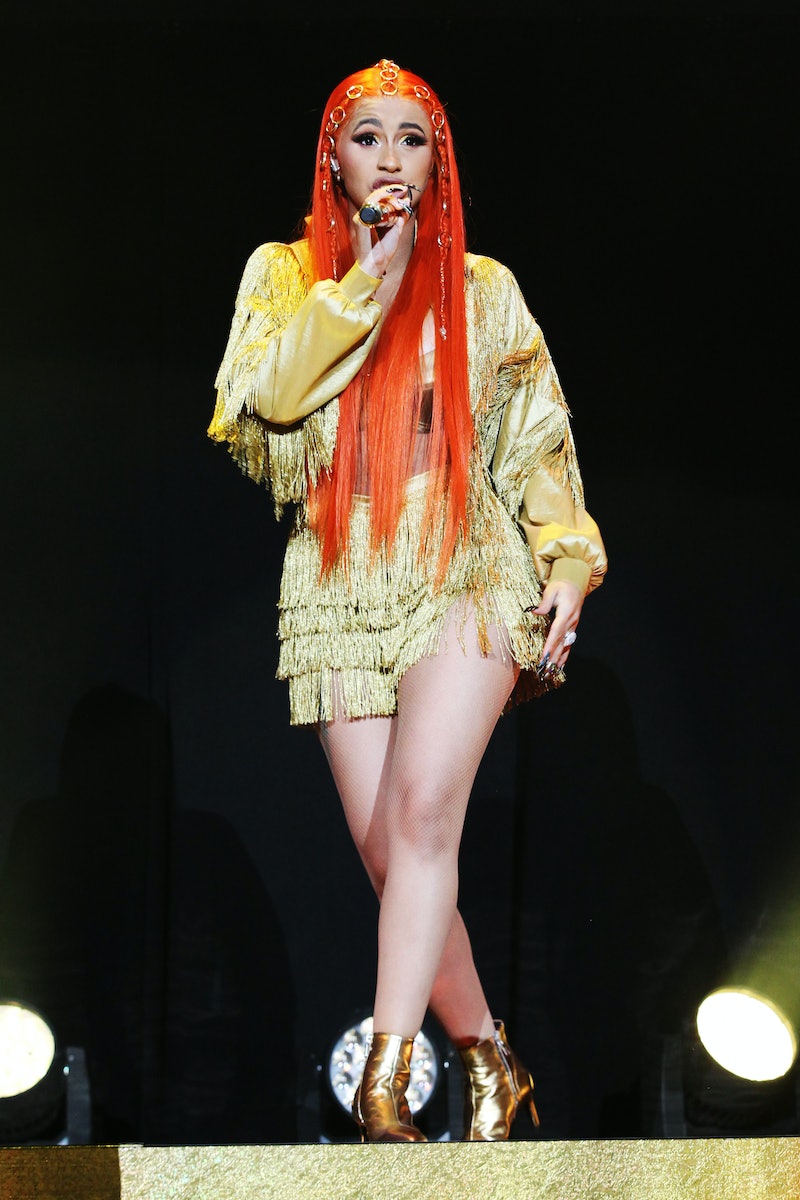 On Wednesday Jan. 23, it was announced that Cardi B will soon begin a Las Vegas residency and the details couldn't be anymore exciting. The 26-year-rapper will reportedly be taking the stage as part of the grand opening at The Palms Casino Resort's brand new amphitheater-style complex KAOS, which is set to open this April, according E! News. The Associated Press reveals that tickets for Cardi's residency are available for select dates. However, no specific dates or pricing were listed on The Palms Casino website as of Wednesday. The news, which was first reported by USA Today, did reveal that other entertainers set to have exclusive residencies at the new hotspot include G-Eazy, Kaskade and Skrillex.

Cardi joins a prestigious list of celebs who have hosted Las Vegas concert residencies such as Cher, Celine Dion, Elton John, Mariah Carey, Jennifer Lopez, Britney Spears, and Lady Gaga. The "I Like It" hip-hop artist's new gig marks her first residency in the Nevada locale and further proves that her star power just continues to gain momentum. The entertainer dropped "Money," her first solo single since giving birth this past October, releasing its accompanying music video this year and another visual for her collaboration with City Girls called "Twerk" earlier this month. She also recently received four Grammy nominations for her debut album Invasion of Privacy, which was released in April 2018, and also received an additional recognition for her participation on Maroon 5's hit song "Girls Like You."

In addition to those nods, Cardi has managed to win three American Music Awards, three MTV Video Music Awards, two iHeartRadio Music Awards, two BET Awards, and a Billboard Music Award in a span of less than two years. Since bursting onto the music scene, seemingly out of nowhere, in June 2017 with the release of her first single "Bodak Yellow (Money Moves)," Cardi has remained a major presence on the album charts. The mother of one entered Guinness World Records for having the most simultaneous Billboard US Hot 100 entries by a female in 2018.

As she rolls effortlessly into 2019, Cardi B is set to embark on her second performance at the Grammy Awards and is also slated to star in a Pepsi commercial for the upcoming Super Bowl which will air on Feb. 3, according to E! News. The beverage company released a video teaser for the ad aptly titled "Cardi B's Diamond Can" which featured the Bronx-born MC sitting in a booth at a diner as she taps her red and blue nails against a bejeweled Pepsi container while smiling at an unidentified person sitting across from her. a man can be seen in the background snapping a photo of her as she caps things off with her infamous catchphrase, "Okurrr!"

The soda commercial lands Cardi amongst other major superstar who have been featured in the company's Super Bowl advertisements such as Michael Jackson, Beyoncé, Britney Spears, Madonna, Pink, and the Spice Girls. Although she won't be performing during the halftime show, it's been revealed that she will join Bruno Mars during the Super Bowl Music Fest which will take place the night before the game, according to Billboard.

With the Super Bowl, a slew of awards, and now a residency under her belt, 2019 is shaping up to be Cardi' best year yet.