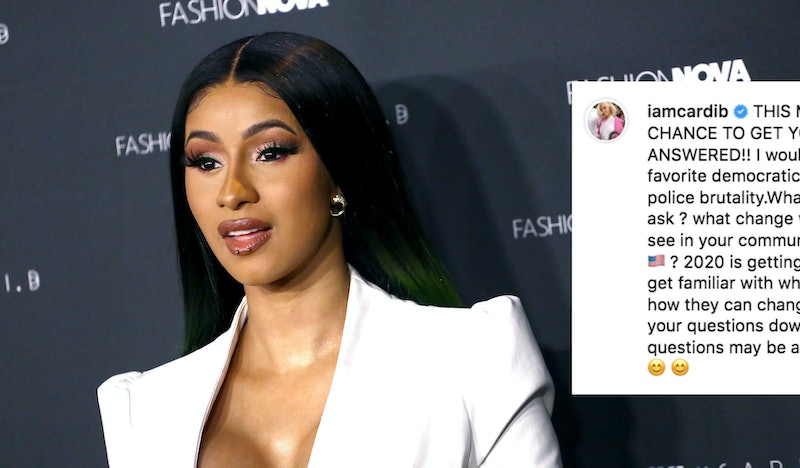 Cardi B has a whopping 46.6 million followers on Instagram, and she isn't afraid to use that platform to make sure people are politically engaged. She proved this again on Tuesday, July 2 by sharing a video tied to the upcoming 2020 election. Cardi B shared her biggest question for the Democratic candidates, while encouraging her followers to post theirs.

In the video, Cardi said,

Cardi also put in her own two cents about what she wants to change, which was the lack of response to police brutality. She continued, "Me? If I was to ask my next president a question, I would like to ask: What are we gonna do about police brutality? It seems like it keeps on happening every single day, and they're getting away with it. And nobody's talking about it. It seems like nobody gives a — you know what I'm saying? And I would like to see a change. I would like to know if our next president even cares, because it seems like the one that we have now doesn't."

This isn't the first time Cardi has denounced Donald Trump — back in January, Cardi ranted on Instagram about the government shutdown and criticized Trump's promise to build a border wall.

Cardi ended her new video with a call-to-action and a promise that she would select at least one to ask the candidates. "So what type of questions would you like to ask a Democratic candidate?" she said. "Ask those questions down in my comments, and we are going to try to get them questions answered. And please let it be realistic questions. And, I don't know, your question might be the one that gets answered."

"THIS MIGHT BE YOUR CHANCE TO GET YOUR QUESTION ANSWERED!! I would like to ask my favorite democratic candidate about police brutality.What would you like to ask ? what change would you like to see in your community and in the USA ? 2020 is getting very close let’s get familiar with who is running and how they can change the country ! Put your questions down below and your questions may be answered very soon."

Cardi didn't explicitly specify in the post who that "favorite Democratic candidate" is (though in the past, she's vocalized support for Bernie Sanders). Above all, she wants to keep herself and her fans informed: Cardi posted a photo of all 20 candidates on Instagram in April, telling fans she was going to "research these names" and asking them to "START LEARNING AND ENCOURAGING VOTING NOW !" before it was too late.

It seems like Cardi's followers are grateful that she's speaking up and willing to get involved, because they've taken to the task of asking questions with gusto. The topics in the comments range from climate change to trans rights to the horrific conditions of detention centers at the border.

Below are just a few examples of responses:

While it's still unclear when Cardi plans to pick a winning question (or questions), or how she'll get answers from the candidates, she assured fans that this was the real deal. "YES , YES , YES ....... your questions will be getting viewed and it might get pick !" she wrote in a later comment on her post. For now, there's still time to ask your question, so don't miss this chance.

More like this
Are John Legend & Kanye West Still Friends? The Singer’s Latest Update Is Candid
By Brad Witter
Kathy Hilton Tried To Explain Why She Misidentified Lizzo As Precious On Live TV
By Jake Viswanath
Sophie Turner & Joe Jonas’ Fave Taylor Swift Album Is Full Of “Bangers”
By Sam Ramsden
The Sean Bean Intimacy Coordinator Controversy, Explained
By Sam Ramsden
Get Even More From Bustle — Sign Up For The Newsletter