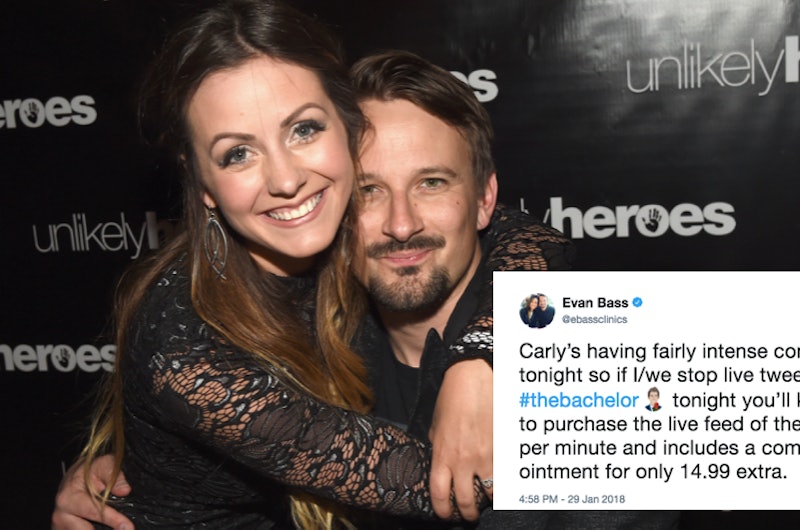 The Bachelor traditionally airs on Monday nights in the Winter, but Bachelor in Paradise sweethearts Carly Waddell and Evan Bass might not be able to catch all of Jan. 29's episode. It sounds like Evan and Carly might have their baby as The Bachelor airs, because Evan tweeted that Carly has been having "fairly intense contractions" late on Monday night. Evan regularly live tweets new episodes of the show and joked in the tweet:

Carly's having fairly intense contractions tonight so if I/we stop live tweeting #thebachelor tonight you’ll know it’s time to purchase the live feed of the birth. 19.95 per minute and includes a complimentary ointment for only 14.99 extra.

Of course, he's likely kidding about that part about the livefeed, but it's a pretty funny joke considering that Evan and Carly met, fell in love, got married, and had a sonogram on Bachelor in Paradise. And now their baby daughter may arrive on a Monday night as The Bachelor airs on TV? You couldn't script a better happily ever after for this cute and quirky couple.

As of 8:51 p.m. ET, Evan was still live-tweeting the new episode of Arie's Bachelor season, commenting on the latest happenings of Chelsea and Bekah M. He even included their daughter, Isabella, in one of the livetweets.

Earlier this month, Evan and Carly revealed that they would be naming their daughter Isabella Evelyn "Bella" Bass on Instagram. Evan explained on Instagram that the baby's middle name, Evelyn, held a special place in his heart:

Well folks, I lost the battle to name our baby girl Evan but I won the war with the name: “Isabella Evelyn Bass.” My sweet Grandma Bass was named Evelyn and she was the best and I hope that our daughter is fierce like her.

The couple also recently celebrated with a baby shower for Bella's upcoming arrival and the event was attended by plenty of Bachelor franchise alums, such as Juelia Kinney, Jade Roper (and her baby daughter Emerson), and Kaitlyn Bristowe.

Evan and Carly both appeared as contestants on seasons of The Bachelor and The Bachelorette, then ended up on Bachelor in Paradise, where they would ultimately meet. Carly wasn't sure about how she felt about Evan at first, but later in the season, they both fell in love with each other and had a quirky and endearing courtship. They ended the season as one of three engaged couples — but Evan and Carly were the only couple to make it to the altar. Last year, Evan and Carly tied the knot in Mexico in a ceremony that aired during Bachelor in Paradise.

In August 2017, Carly confirmed the baby's due date as February 2018 and Carly and Evan had a sonogram during After Paradise, giving viewers their first glimpse of Baby Bella Bass. The baby is the first for Carly and the first daughter for Evan; he has three sons from a previous relationship. Considering how closely Evan and Carly's relationship is tied to The Bachelor franchise, it just makes so much sense. Sure, the only thing that could make it more perfect would be if Carly and Evan's child arrived as an episode of Bachelor in Paradise aired, but hey, that's not up to us. It's up to Bella.

If Bella is to be born as The Bachelor airs, she can check out the rest of Arie's season for herself. After all, there is a such thing as Braxton Hicks contractions and Carly may be having those. Either way, it sounds like Bella is close to becoming the newest member of Bachelor nation very soon.