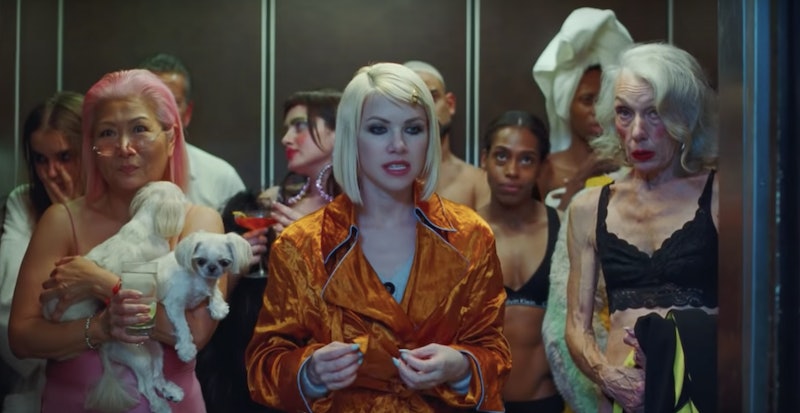 If the world has got you down, let Carly Rae Jepsen's new song "Party For One" pick you up. Jepsen's new single is the self-care we all need in this messed-up world. Instead of crying on the dancefloor, Jepsen offers a self-love anthem complete with a video filled with dancing, bubble baths, and lots of sex toys.

The video for "Party For One," her first solo single since last summer's "Cut To The Feeling," begins with Jepsen, all alone, checking into a hotel, only to have the women at the front desk smush her face into a loaf of bread, which is totally in right now. It's probably why Jepsen doesn't even react, everyone's just doing what they can to get by these days.

This includes having a literal party for one where Jepsen is dressed like couture Margot Tenenbaum and happy to channel surf and drink as much tiny bottles of flavored vodka as she wants. Gotta love that Absolut Vodka #sponcon. The thing is, she's not the only one holed up in this hotel alone just wanting a little peace and quiet, and maybe have a solo dance party in their Calvins. You do you, Carly.

To get over whatever it is that ails you — in Jepsen's case a no-good ex — it's best to just do it yourself. "If you don't care about me/I'll just dance by myself," Jepsen sings on the synth pop bop, channeling her inner-Robyn. "Back on my beat," before adding that she's also fine "making love to myself," too. Basically, don't worry about her, she's good and so is everyone else in this video.

The first single off her upcoming album, the official full-length follow-up to 2015’s E•MO•TION, has Jepsen sending the message that you can't let them get you down, whoever "them" may be. And honestly, it might just be yourself for making the rather dubious decision of cutting your own bangs.

Either way, don't deny yourself the pleasure of living out loud and celebrating whatever it is you're into. Whether that's pearl-encrusted thongs, vibrators as microphones, or spaghetti-filled baths, Jepsen's not here to judge, she's just here to make you dance – or, you know, whatever else makes you happy.

In a statement, Jepsen said that "Party For One" "is an anthem of what it is to celebrate time with yourself, which is a hard thing for people to really enjoy sometimes, and it’s something I’m learning to do more and more." The song, she also told People, "represents a lot of what this album is about for me, which is romantic love but self-love too."

Jepsen is clearly feelin' herself. She told People back in April that she's written 100 songs for the new album and is looking for her friends to help her narrow down which ones will end up on the final tracklist.

"I find them to be extremely helpful in that because it’s hard to have perspective when you’ve just been in the studio for so long and working so hard with it," she said. "It’s great to have friends who care and are invested enough to give their opinions and help narrow it down."

For those who love "Party For One," they can have their own party when Jepsen performs the new single live for the first time on The Tonight Show Monday, Nov. 5.