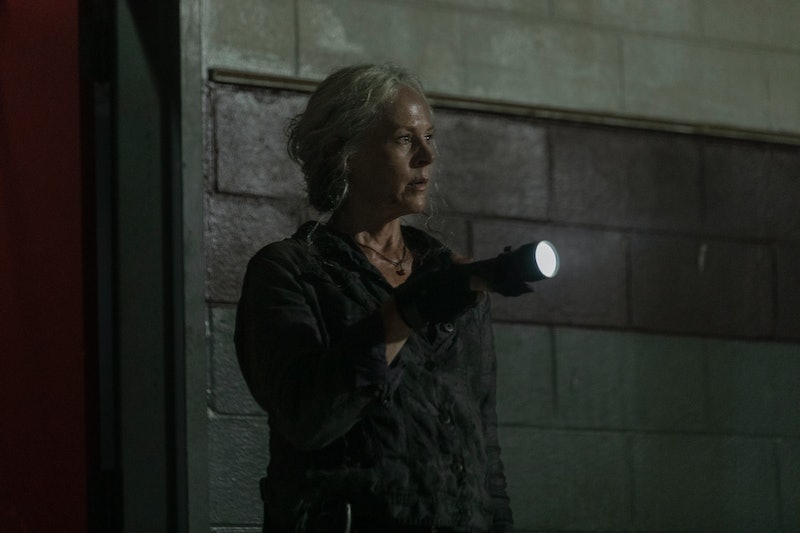 Spoilers ahead for The Walking Dead Season 10, Episode 3. What's real and not real for Carol is a question that not only the characters but the audience have during the Oct. 20 episode of The Walking Dead. Turns out, Carol isn't hallucinating the Whisperers on The Walking Dead. But because she hasn't been sleeping and taking pills to stay awake, Michonne and Daryl aren't buying it. But when Alpha discovers that Carol shot and killed one of her Whisperers, the gang is going to learn the hard way that she was telling the truth.

A lot has changed for Carol since that peaceful motorcycle ride with Daryl in the Season 10 premiere. Being off the water and back in Alexandria has her hallucinating Henry and all of the other children in her life who have passed (including her biological daughter Sophia). Unlike Michonne and Daryl, Carol has no intention of heeding Alpha's warning of borders. So when Alpha taunts Carol while meeting at the place where Henry died, Carol attempts to kill the Whisperer leader. It's an act that even Carol's closest allies of Daryl and Michonne can't condone. Later, when Carol claims to have seen three Whisperers running in the forest after Alpha announces new borderlines, they begin to worry about her mental health.

Fans should be concerned too, especially after those hallucinations and dreams about interactions with Daryl. After that, everything Carol sees in "Ghosts" should be called into question. While on watch in the school they are hiding out in, Carol gets trapped and attacked by a zombie horde. It seems impossible it could be real since Daryl had just been awake and didn't seem to hear her. Yet, the end scene proves that Carol was attacked in the gym — and, more significant for the community's future with Alpha — that she did see three Whisperers in the forest and she killed one, who has now become reanimated.

Although Michonne trespassed into Alpha's territory a few times herself, she has been playing nice with the Whisperer leader to avoid another massacre. When she heard Carol's report that there were Whisperers in the forest, Michonne ordered, "Capture, do not kill." But by that point, Carol had already murdered one of Alpha's followers. That, combined with the fact that Carol had already shot directly at her, may be the end of Alpha's "merciful" behavior toward the survivors.

Carol and Alpha are poised for a major face-off as showrunner Angela Kang teased to the Series Regular podcast from The Hollywood Reporter. "We're playing a lot in her perspective as this grieving mother, who just wants to settle the score between her and Alpha, and the lengths that she'll go to to do that," Kang said of Carol in Season 10. "Revenge is a dark emotion, and it leads her down some different paths."

Unfortunately, Carol's behavior has seemed to already isolate her from her friends. Kang told THR that Daryl "wants to be there" for Carol. But she was suspicious of Daryl when he claimed to believe her about the Whisperers. With her best friend questioning her sanity and Carol's tendency to pull away, she might not have much backup when Alpha comes knocking at Alexandria's gate. So, after defeating so many zombies, revenge could be what causes the end for Carol in Season 10.

This article was originally published on Oct. 19, 2019