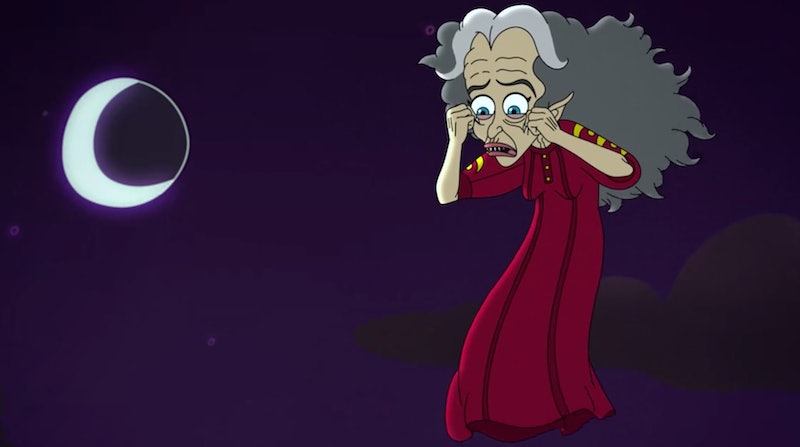 Big Mouth Season 3 showcases an impressive celebrity voice guest cast, including everyone from Thandie Newton and Nathan Fillion to Chelsea Peretti and Martin Short. But Carol Kane's Menopause Banshee in Big Mouth might be the most hilarious addition this season. Hormone Monsters have up until now just been for the kids of show, but this one is haunting Andrew's mother, played by Paula Pell. She shows up in the "Florida" episode of the season, in which the family heads south for spring break. On the way down, Andrew's mom suffers from hot flashes, only to have the terrifying banshee eventually appear and explain to her what's going on.

While Connie and Maury, two of the kids' Hormone Monsters are opening up the pre-teens eyes to all of the possibilities of of relationships, sex, and the changes in their bodies, the Menopause Banshee is more foreboding. She cackles, "Change, change, change" and speaks in rhyme: "Your mood, she swings, the tears do fall, and soon you'll dance at the Banshee Ball!" before flying away into the night.

She only appears in just one episode this season, but given that menopause is setting in for Andrew's mom, it's highly possible that Carol Kane returns, as Big Mouth has been renewed through Season 6.

Netflix devotees will certainly recognize Kane's unique and memorable voice from her role as Lillian Kaushtupper on Unbreakable Kimmy Schmidt. However, her career spans nearly 50 years and includes appearances in more than 160 movies and TV shows, many of them animated, so she's no stranger to voice roles.

While attending the Professional Children's School in New York City, Kane made her theater debut all the way back in 1966, when she was only 14 years old, in a stage production of The Prime of Miss Jean Brodie. By the early 1970s, she made the leap to the big screen, taking on roles in movies including Wedding in White, Dog Day Afternoon, and Hester Street, for which she was nominated for an Academy Award.

In the late 1970s and early 1980s Kane starred in films like Woody Allen's Annie Hall, The Muppet Movie, and the popular TV series Taxi. Further roles in memorable films like The Princess Bride, Jumpin' Jack Flash, and Scrooged followed, among others, racking up more than 50 credits for Kane in less than two decades. The '90s and 2000s were equally busy decades for Kane, including roles in Seinfeld, Addams Family Values, Family Guy, and Two and a Half Men.

However, it's her most recent role as Lillian, Kimmy's zany New York landlord, in Unbreakable Kimmy Schmidt that's introduced Kane to a whole new audience. When the Netflix comedy series began in 2015, Kane admitted it was a no-brainer to join the cast, especially since it gave her the opportunity to work with Tina Fey and Robert Carlock.

"I would have said yes no matter what, because I just think when you get an opportunity to work with great writers, you have to take it," she explained in an interview with the Los Angeles Times. "Because, for me, the writing is everything. It’s just everything." She added, "It’s a cliché, but I was just a huge, huge admirer."

Unbreakable Kimmy Schmidt unfortunately ended in 2019, but Kane will reprise her role as Lillian in the upcoming movie sequel. In the meantime, she isn't slowing down anytime soon. She's currently filming the World War II-era TV drama The Hunt and will reportedly star in Son of Houdini, a rom-com set in the 1920s.

While Kane has only appeared as the Menopause Banshee in one episode of Big Mouth thus far, there's also a chance of the character appearing in future episodes, especially since Kroll himself told Fortune that "she's coming for everyone!" Here's hoping!