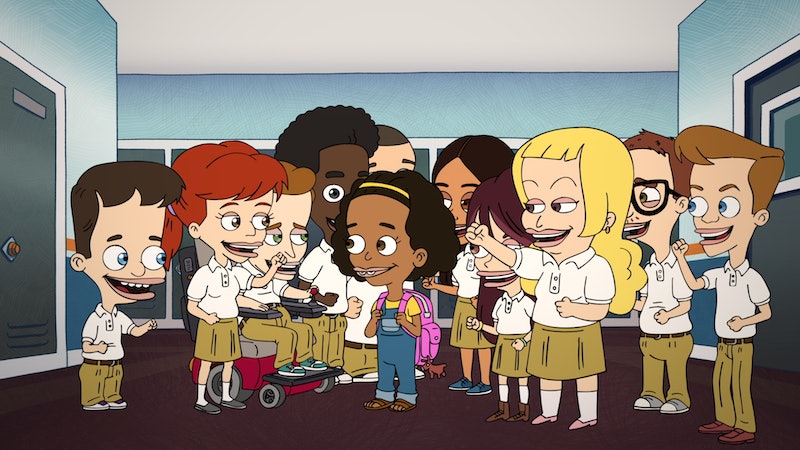 Big Mouth has had no shortage of celebrity guests drop by Bridgeton Middle School to deliver some gleefully disgusting dialogue, and Season 3 brings even more recognizable voices into the hormonal fray. The Big Mouth Season 3 celebrity voice guest cast features plenty of favorite's from season's past — including Nathan Fillion as himself, Zachary Quinto as Aiden (a character introduced in the show's 2019 Valentine's Day special) and Kristen Wiig in a triumphant return to her role as Jessi's Vagina. Alongside the Big Mouth veterans, Season 3's voice cast includes a new kind of Hormone Monster, a pansexual student, and even contributes to a Netflix series crossover.

While creator Nick Kroll has once again assembled an impressive guest cast for his series, there is one celebrity he hasn't been able to get on the show — Howard Stern. "I wrote him a very long letter," Kroll tells The Hollywood Reporter. Kroll made an impassioned plea to have Stern play Gavin, the Hormone Monster played by Bobby Cannavale in Season 2. Despite Kroll's pleas, Stern declined the opportunity. While Stern may have turned down the opportunity to appear on Big Mouth — for now, that is — there are still plenty of celebrities who were willing to lend their time and talents to Season 3. Here are some of the standouts you'll likely recognize as you watch.

Ali Wong plays one of the biggest new additions to the cast: a new student at Bridgeton that also goes by the name Ali. Ali's introduction to her class turns heads when she drops that she's pansexual, inspiring a lot of questions from her fellow students and give the show an opportunity to discuss sexuality outside of the gender binary.

The Brooklyn Nine-Nine star previously played Monica Foreman-Greenwald, but she's taking on a new role for Season 3. This season, Peretti plays Nick's new phone that has a hunger for inappropriate pictures of its owner.

When Martin Short was first cast on Big Mouth, Kroll described the character as a "Canadian pansexual magician — the part he was born to play," per Hollywood Reporter. Those three traits are pretty much all you need to know about Short's character, Gordie, the star of fictional Netflix series Gordie's Journey, which Jay quickly becomes enamored with.

In the episode "Florida", Nick tags along with Andrew as the latter's family visits the Sunshine state and Andrew's grandfather is played by Emmy winner Judd Hirsch. Hirsch has formed a niche out of playing Jewish grandfathers recently, having played the similar role of Pop-Pop Goldberg in The Goldbergs.

Andrew's father is a pretty cranky guy, but that's nothing compared to his Uncle. David Cross of Arrested Development fame plays Andrew's obnoxious Uncle Skip, who rocks a gold chain and seems to have an allergy to buttoning his shirts up all the way.

Big Mouth Season 1 introduced the world to Hormone Monsters, and Season 2 gave audiences the Shame Wizard. Now, for Season 3, The Unbreakable Kimmy Schmidt's Carol Kane lends her voice to the Menopause Banshee that has started to haunt Barbara Glouberman.

Big Mouth places a surprising amount of care into getting the facts of sexuality and anatomy correct, and it turns out the writers pay apply that same attention to detail to jazz history as well. The Office's Craig Robinson plays the role of Harvey Brooks, a real jazz pianist who, in Big Mouth and in real life, is an inspiration to Duke Ellington.

Retta is known for having played the frequently irresponsible Donna Meagle on Parks & Rec, but she delivers a much more maternal performance on Big Mouth. In the episode-long flashback "Duke", Retta plays the role of Duke Ellington's mother who pushes him to play piano.

Just as Nick has a ghost of a historical black icon in his attic, so too did Duke Ellington. In Duke's flashback episode, we learn that Duke used to seek advice from the ghost of Harriet Tubman, voiced by Wanda Sykes.

The entire Queer Eye cast gets animated so that they can try and give Coach Steve a much-needed makeover. While the Fab Five have yet to meet someone whose life they can't make even a little bit better, Coach Steve may be the first person they encounter who is completely immune to self-improvement.

While Missy has been perfectly content framing her sexual desires through an imaginary version of Nathan Fillion, she gets a rude awakening when has a Hormone Monster assigned to her. Missy's monstress, voiced by Thandie Newton, is a little different than Jessie's, but still brings up all the same feelings one has when faced with puberty.

While some of these Big Mouth Season 3 celebrity voice guest cast appearances may be one-time affairs, expect characters like Ali, the Menopause Banshee, and Missy's Hormone Monster to become part of the show's large stable of recurring characters.