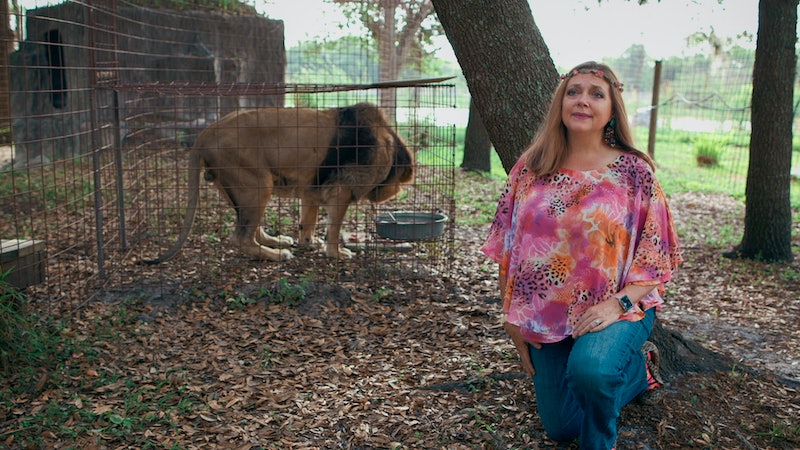 Turns out that Netflix users who can't stop marathoning Tiger King aren't the only ones who have theories about what happened to Carole Baskin's husband. In a new interview, the lawyer for Carole Baskin's ex-husband shared his theory about the disappearance — specifically, he believes that Don Lewis was most likely murdered, and he has a theory as to how it all went down.

Lewis — the second husband of animal activist and Big Cat Rescue founder Baskin — mysteriously disappeared in August 1997. And while officials never found evidence of foul play, Baskin has frequently been accused of having some kind of involvement in his disappearance, though she has repeatedly denied the allegations against her and is not currently a suspect.

Joseph Fritz, who was Lewis' lawyer before he went missing, is one of the people who suspect foul play. "I do have reason to believe he is dead," he told People in a new interview, adding that in his opinion there are "too many indications of foul play, too many motives, too many opportunities." Furthermore, Fritz insisted that Lewis would never abandon his family without a trace, adding, "He wouldn’t leave him family, his fortune and his kids behind. There was enough motive and enough opportunity for something bad to have happened, and it probably did."

In the interview, Fritz reiterated a theory he originally proposed on Nancy Grace, that Lewis — who was set to fly to Costa Rica the morning he disappeared — was lured to a nearby airport and attacked. "We heard he got strangled with an electric cord in the backseat and was thrown out over the gulf," Fritz alleged. "In my working theory, one person [was] flying the plane and one person [was] strangling."

However, unlike Baskin's long-time rival, Joe Maldonado-Passage (a.k.a. Joe Exotic), Fritz doesn't necessarily think that the Big Cat Rescue founder Baskin is responsible for Lewis' death. "I don’t know who the murderer is," he said, adding that it's difficult to think of any possible motives for why someone would want to kill Lewis. "He was a pretty likable guy,” Fritz recalled. "He never really hurt anybody. When he loaned money, it was at high interest rates. He aggravated somebody on a land purchase once; that was bad. But nothing I would say was worthy of murder."

Lewis' disappearance is also being treated as a homicide by Hillsborough County Sheriff Chad Chronister, who asked Twitter followers to share any potential new leads about the case in the end of March. "I wish I had more answers," he told People in April, adding that thus far, there are no real leads on "how and who’s responsible for" Lewis' disappearance. "I only hope, with the popularity of this Netflix series, that I’ll get those answers."

The popularity of the Netflix series hasn't been as promising for Baskin, who has continually refuted the accusations that she was involved in her ex-husband's disappearance. "The series presents [Maldonado-Passage's accusations] without any regard for the truth or in most cases even giving me an opportunity before publication to rebut the absurd claims," Baskin wrote in a blog post shortly after Tiger King became a sensation. "They did not care about truth. The unsavory lies are better for getting viewers."

It's been over twenty years since Lewis mysteriously disappeared (he was declared dead in 2002), so the likelihood of the case ever being properly closed is slim. However, if nothing else, it seems the popularity of Tiger King and the renewed interest in the case might just help Baskin, Fritz and Lewis' other loved ones finally find answers.