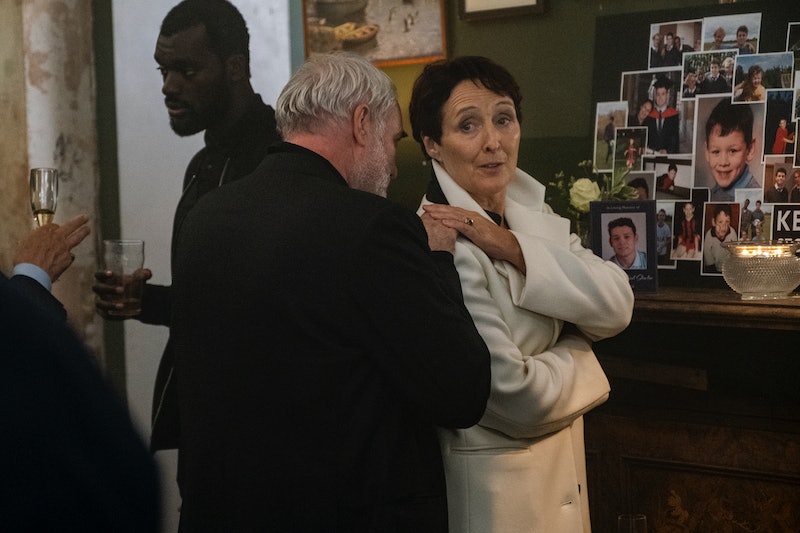 The second episode Killing Eve Season 3 opens at a funeral reception for Kenny, the son of Eve’s MI-6 boss Carolyn. There’s rain and hors d'oeuvres and somber music. The drinking is making people maudlin, but Carolyn is characteristically inscrutable, instinctively superintending the event rather than attending it. She steals a moment to gaze at the photos of her son on display, then flags a passing waitress: “Can you make sure everyone’s topped up please?”

For Killing Eve star Fiona Shaw, who won a 2019 BAFTA for her portrayal of the stoic spy chief, figuring out how Carolyn would mourn was the central puzzle of the series’ third season. “You feel that Carolyn has no problem in the territory of international espionage or the territory of chance and intellect,” Shaw tells Bustle. “In the territory of human emotions and family, of course, she's just as helpless as all the rest of us are.” Up until now, Carolyn has moved through the show with an air of invincibility. Now, as Shaw puts it, “the carapace is cracked.”

“All of us make plans how we will be at a funeral, but you don't know how you're going to be. You can just hope that you'll be dignified.” Shaw, who is originally from Ireland, sees something distinctly cultural in how Carolyn navigates Kenny’s death. “It's very English for people to step over their own feelings and try and keep going. We're a very, very backward country in that regard.”

Not everyone is as impressed with Carolyn’s reserve, and a conversation about what mourning should look like recurs throughout the episode. At one point, Shaw's character hides in her car eating sandwiches, unable to go to work where she’s been sidelined on account of her grief, and unwilling to go home, where her daughter demands a more ostentatious display of emotion. “You’d think it was one of her bloody dinners,” the daughter complains at her brother’s funeral, desperate to see the very crack Carolyn is at pains to conceal.

When the episode was filmed in 2019, the salience of a grief plot could not have been predicted. Now that we’re amid a worldwide pandemic, it was hard for our conversation to ignore. “You just don't know when feeling can be overwhelming, but feeling isn't always overwhelming either,” says Shaw. “That's what's astonishing about, God, what we're having at the moment. People are literally having to say goodbye to their families without seeing them off. It's a kind of an obscenity, really, that people should lose anyone younger than them. That's a very, very terrible situation to lose your offspring. It's not natural.”

What’s important to Shaw is not to mistake an outward display for the emotion itself. Carolyn is stoic at the memorial and fragile when no one’s looking. “I remember I lost my brother, and my father was very stoical. Of course, it was in those slippages that one saw how devastated he was by death, loss,” says Shaw, who observed the grief of a parent firsthand when her brother died in a car crash at 18. “People are very complicated in how they deal with grief. It certainly isn't the way people perform it, because you're always only seeing a slice of how people feel.”

And if a certain kind of stoicism can be attributed to English culture, so, too, can deep resolve. “It's probably left over from the losses of the First World War and the Second World War, where the whole country would come to a standstill if everybody mourned,” Shaw believes. “We've still got that sort of Dunkirk spirit, even at the moment. The poor nurses and doctors are being asked to face patients without proper protection. It's a sort of cultural need to ignore what is life-threatening and psychologically-threatening.”