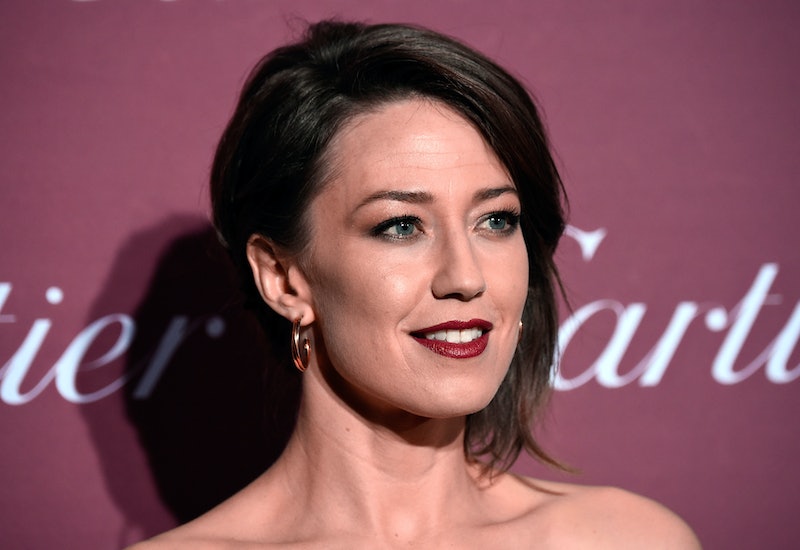 When the Television Critics Association announced its annual TCA Awards nominations this Monday, there weren't too many surprises in store for awards season forecasters. Predicted Emmy heavyweights — including returning series like The Americans, Better Call Saul, and Fargo, as well as newcomers like The Crown, The Handmaid's Tale, Stranger Things, and This Is Us — all landed nods in their respective categories. But among the minor snubs and shocks inherent in any nominations announcement, there was one particularly pleasant surprise: Carrie Coon made TCA Awards history by landing a double nomination for her performances in both HBO's The Leftovers and FX's Fargo.

An actor receiving simultaneous recognition for two distinct roles is unprecedented in the 33-year history of the awards ceremony. The TCA Awards (not to be confused with the Critics' Choice Television Awards, handed out by the Broadcast Television Journalists Association), honor performers in two gender-neutral categories titled Individual Achievement in Drama and Individual Achievement in Comedy; so the fact that someone could be highlighted for their achievement in two separate series within the same year does make a certain amount sense. But it's still something that's never happened before — and Coon more than earned her distinction as the first such double honoree.

On all three seasons of The Leftovers, which ended its run earlier this month, Coon portrayed the pragmatic and emotionally brittle Nora Durst, left reeling and clutching for meaning after her entire family vanished in the Rapture-like event of the Sudden Departure. On the third season of the Coen-inspired anthology Fargo, the 36-year-old actor plays the demoted but determined police chief Gloria Burgle, who finds her beliefs about the world challenged during the pursuit of a particularly grisly case.

Both characters shared traits in common: most notably, a no-nonsense demeanor, a prioritization of family, and a strange aversion to technology. But Nora and Gloria are most remarkable for how they're different. While the former is all hard edges and chilly sarcasm, the latter is more warm and rounded. While Nora brushes off the fantastical with cynical disbelief and patronizing disregard, Gloria faces an increasingly cruel world head-on with brave optimism and unflagging sincerity.

The fact that the Television Critics Association sought to recognize Coon for both these tremendous performances — two of the best this year, regardless of the fact that they were given by the same actor — is encouraging. (Also encouraging is the fact that Coon is honored among a field of 14 acting nominees across drama and comedy, 11 of whom are women.) Hopefully Emmy voters will take note and follow suit, recognizing Coon with a double nomination; although there it would be in two different categories, Drama Series for The Leftovers and Limited Series for Fargo.

Coon undoubtedly faces tough competition in both categories at the Emmys — from the likes of Claire Foy (The Crown) and Elisabeth Moss (The Handmaid's Tale) in Drama and from the women of Big Little Lies and Feud in Limited Series — but if there is any justice in the world, the Television Academy will acknowledge the greatness of Coon's accomplishment this year and honor her accordingly.

Coon's history-making TCA nomination could also mean good things for more than just her specifically; it could also help the Emmy chances of one of her two shows. While Fargo was an Emmy darling in both of its previous iterations and will likely be so again in its current one, The Leftovers was completely snubbed by the Television Academy for its first two seasons… and is in severe risk of being snubbed across the board if it goes unrecognized again this year. But the double-nomination for Coon and the show's nod in TCA's Program Of The Year category can only help its changes at the Emmys… although the show's inexplicable omission in the Drama Series category might not. (The Leftovers is oddly the only one of the six Program Of The Year nominees that isn't also represented in its specific Drama/Comedy/Miniseries category.)

Fortunately, voting for the 2017 Emmy nominations is open now and remains open through June 26, so hopefully news of Coon's historic achievement will reach the ears of Television Academy members as they're filling out their ballots and make them take a second look at her performance — and at the under-appreciated The Leftovers as a whole.