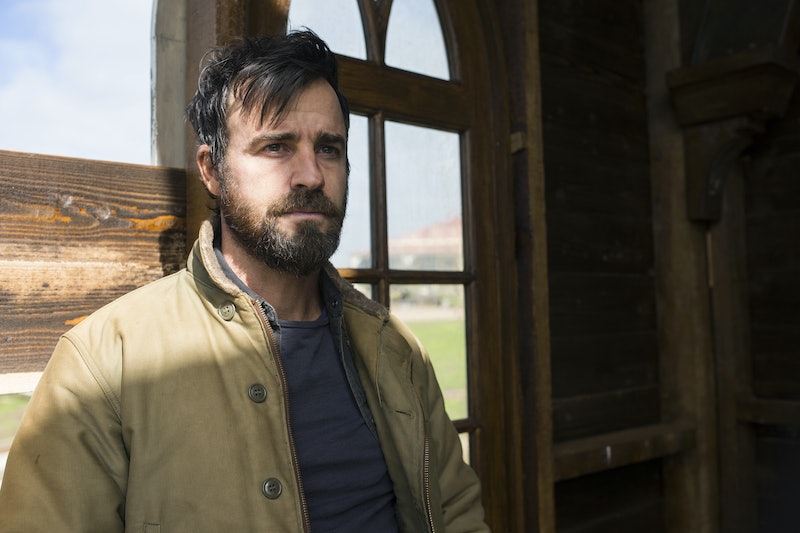 Season 2's haunting theme song by Iris DeMent instructed viewers of The Leftovers to sit back, relax, and let the show wash over them without worrying about such concrete things as "answers." ("Let the mystery be." ) But now, the show is ending — and knowing that The Leftovers won't return for Season 4, there's hope that the final episode will bring some sort of closure. However it ends, audiences will be mourning the passing of one of the most wildly original series in television history.

In that regard, perhaps it's for the best that The Leftovers is ending with Season 3… and I'm saying that as a huge fan of the show, one who will be devastated to see it come to a close on June 4. The predetermined end date is allowing the show to go out on a high note, with co-creators Damon Lindelof (Lost) and Tom Perrotta (who authored the 2011 novel on which the series is based) able to craft a compelling conclusion without the ambiguity of an open-ended run lingering over their heads.

In fact, it was Lindelof's and Perrotta's decision to finish the show now, not HBO's. The show has never been a ratings juggernaut like some of its network brethren (Game Of Thrones, True Blood, The Sopranos); a mere 895,000 people tuned into the Leftovers Season 3 premiere live when it aired last month, compared to the 7.94 million that watched the GoT Season 6 premiere live last year, according to TV By The Numbers. Ratings mean different things to a premium channel like HBO than they do to the broadcast networks, but the show's co-creators had to know the time they had to tell their story was probably limited.

It was a minor miracle when HBO decided to renew The Leftovers for Season 3, mostly off the back of widespread acclaim and awards attention; but even so, the network cut the season's episode order from 10 to eight. Lindelof and Perrotta saw the writing on the wall and, rather than producing another season under the kind of ambiguity their characters suffer through on a daily basis, they decided to end the show on their own terms.

"We were starting to wrap our brains around the notion that we weren't going to get any more episodes after the second season," Lindelof remembered in an interview with Variety. "And then, mostly because of the critical response and the audience that stuck through it was so pleased at how the second season turned out, HBO said, 'Do you want to do more?' And we said, 'Only if the show is ending.'"

This decision, while undoubtedly tough for the co-creators and the audience alike, was undoubtedly the right one; The Leftovers has never been better than it is now, heading into its series finale. In an artistic medium typically obsessed with longevity, it's incredibly rare to a see a show that gets better every season — and yet Lindelof's and Perrotta's creation has transformed over its relatively brief lifespan from a difficult and divisive affair in its first season to a Peabody Award-winning phenomenon in its second, and finally into what many critics are hailing as the single best show on television in its third and final season.

The story of The Leftovers' ascendancy into the pantheon of all-time TV greats is as incredible as the many stories told over the course of the final season's eight episodes. Season 3 derived much of its power from lengthy monologues delivered by the show's characters about events that occurred offscreen and that the audience will never see. (Think: Mark-Linn Baker's pitch of the LADR device; Nora's story of how she got her tattoo; Kevin, Sr.'s recap of his great Australian adventures; Grace's recounting of her children's deaths; Nora's memory of the beach ball.)

These monologues fly in the face of the traditional wisdom of "show, don't tell"… and yet not only are they executed magnificently by the stellar cast, but they play beautifully into the season's themes of the stories — and the lies — we tell each other and ourselves in order to make sense and order out of the randomness of life. (In that way, it's only natural that Season 3 also revolves around literal written stories: The Book Of Kevin, as well as Kevin's "Untitled Romance Novel" in the penultimate episode.)

This is just one of the ways that Lindelof and Perrotta broke the traditional rules of television storytelling over the past few years. They also experimented with genre, set entire episodes in the afterlife, refused to provide answers to the show's central mysteries, made their protagonist immortal, jumped around in time with no warning, gave supporting characters hour-long spotlights, earnestly executed a climax that hinged on singing karaoke, started seasons with disconnected prologues, and dared to sincerely tackle questions of faith in a world that feels like it's growing more cynical by the day.

Any of these decisions could have been a disaster, but the show's success lies in how confidently Lindelof and Perrotta executed these risky maneuvers. (Credit is also do in no small part to the show's embarrassingly talented cast, including Justin Theroux, Carrie Coon, Christopher Eccleston, Amy Brenneman, Ann Dowd, Regina King, and more.) It's tempting to wish for such a bold show to remain on the air just to see what the heck it manages to come up with next; but better to remembered for a brief but brilliant run than a longer one that is eventually unable to clear the increasingly high bars it sets for itself.

Like the characters on the show who have been mourning their lost loved ones for seven years, I know fans will be grieving for a long time after The Leftovers is gone; but at least, unlike those characters, they'll have actually had time to prepare for this particular sudden departure.