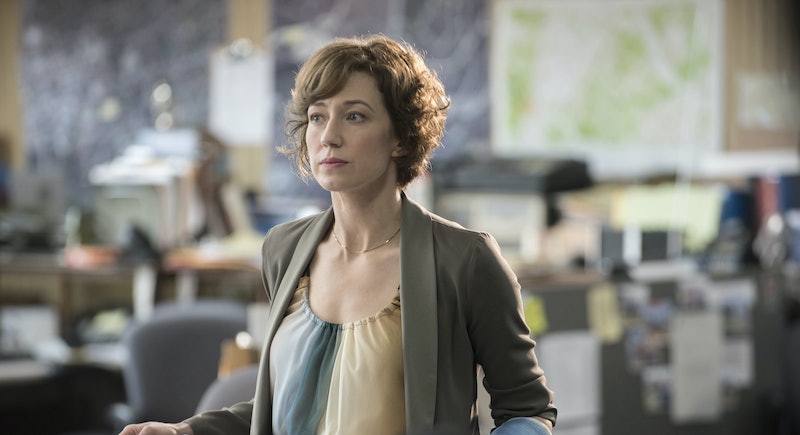 Over the past two seasons of HBO's The Leftovers, Carrie Coon's Nora Durst has become one of the most fascinating characters on all of television — and the reason she has become such a fan favorite is in no small part thanks to the actor who portrays her. Coon, who won a Critics Choice Award for her performance as the grief-stricken woman whose entire family vanished in the Sudden Departure, tells Bustle that the experience of playing Nora has been "gratifying"… and that she's very much looking forward to the "complicated response" she's sure fans will have to the third and final season of The Leftovers.

Although Coon plays Nora so effortlessly and naturally that you might assume they're very much alike, the actor insists that nothing could be further from the truth. "Nora is a very different woman than me, insofar as she doesn't suffer fools and she stands up for herself. She takes over a room in a very grounded way, and she defends her opinions," Coon says, praising her character. "I grew up in the Midwest where I was taught to be a people-pleaser and to just say yes to everything and that I shouldn't make waves, and that my opinion didn't necessarily matter, and therefore I had no way to defend myself."

Despite the differences between Nora and herself, and despite the dark places she had to go to emotionally as an actor, Coon is thankful for the opportunity she had to play such a complex woman: "I just feel that she's taught me, as a woman in my 30s, how to stand up for myself," she says. "I'm so grateful for that lesson, because it came into my life at the exact right time. Especially in this business, where I'm the person who has to look out for me. And to have her teach me that is… She's not gone, she is me, and she's really changed me forever in that sense. She's remade how I move and take care of myself, and how I respect myself. I've learned a lot from her."

How does one even begin preparing for such an emotionally fraught role? For Coon, it came down to exposing herself to some very authentic grief. "In preparation for this part, I read Sonali Deraniyagala’s book Wave. She's the woman who lost her family in the tsunami." (Coon is referring to the tragedy on Dec. 26, 2004, that killed 280,000 people throughout South Asia.) "She lost her parents, her two sons, and her husband in an instant. That was the closest equivalent to Nora that I could find."

Coon admires Deraniyagala's spirit: "That she survived that, this woman… it's so extraordinary. In the book, you can feel her marveling at the fact that she survived it. And in fact, sometimes even engaging with the idea that she had no right to continue to live after losing her family," which is a sentiment that she thinks Nora shares. "It's a beautiful book, I highly recommend it. I hope I talk about and use it respectfully, because I would never want to exploit her situation. But it's just such an honest examination of grief, I think it’s worth everyone reading it, because it's something we're all going to go through. And so is death."

But despite the well of grief at the heart of The Leftovers, Coon ultimately finds the show to be hopeful. "Nora's interesting in that, in some ways she is an everywoman, because I think we all have that well of resilience," the actor says, when asked if there could ever be a final straw that breaks her character after all she's been through. "It's part of what it is to be living in the human condition. Human beings overcome so much every single day all over the world that it's extraordinary. In fact, if you read the newspaper and you think about it too hard, it's impossible to believe. So I don't think there's anything that could break her." Or the rest of us, for that matter. "I think we underestimate ourselves all the time. I think we underestimate what we're capable of."

Coon has gone on quite the journey with Nora, and she's excited for the show's fans to see where things end up when The Leftovers concludes its run this spring. "I'm looking forward to the conversations following the airing of [the finale], because I don't mind if people have a complicated response to it. What I want is for fans of the show to be engaged with the material in such a way that they feel it's worth talking about. That's the kind of art I want to make," she says.

"There's no question in my mind that The Leftovers is inspiring people to ask questions of themselves," Coon declares. "I'm interested in making art that plays a role in how people are making meaning in their lives. Artists are the great filters for what's happening around us; they always have been and they always will be. So the reception to the finale will say as much about the times we're living in as it does about Damon [Lindelof] as it does about you as it does about us making it. It's very dynamic. No matter how people feel about it, I stand by it, and I'm very proud to have been a part of it."

The Leftovers begins its swan song on HBO this Sunday, April 16. Don't miss it.

More like this
Ruth Wilson’s New Thriller Spotlights A Controversial Irish Institution
By Darshita Goyal
Nicola Coughlan Shared A Lady Whistledown Excerpt From ‘Bridgerton’ Season 3
By Grace Wehniainen, Alyssa Lapid and Sam Ramsden
Stanley Tucci Is Next Level In The BBC's 'Inside Man' Trailer
By Sam Ramsden and Sophie McEvoy
Devi Is Going To Meet A “Smoldering Bad Boy” In ‘Never Have I Ever’ Season 4
By Jack Irvin and Gabrielle Bondi
Get Even More From Bustle — Sign Up For The Newsletter