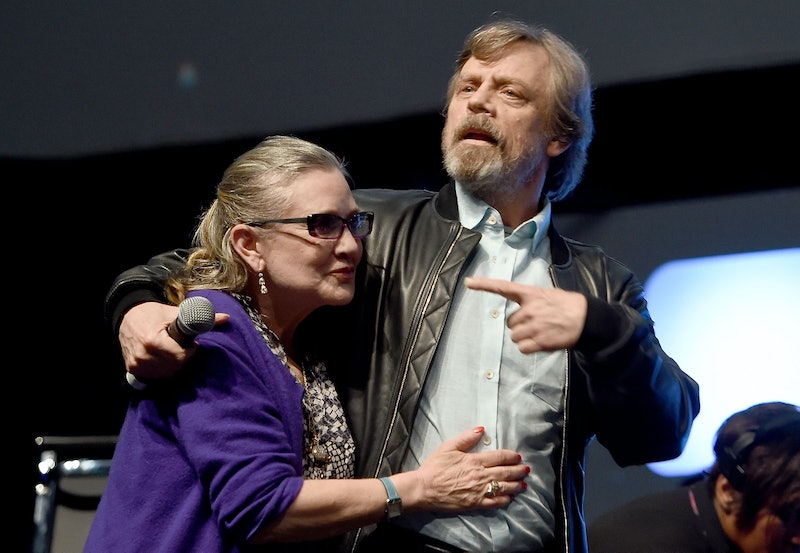 With the holidays approaching, there are two important dates that Star Wars fans will have imprinted on their souls: the upcoming premiere of The Last Jedi (Dec. 15), and the one-year anniversary of Carrie Fisher's death (Dec. 27). While people are understandably hyped to see the latest installment of the Star Wars franchise, the new movie also comes with a caveat of sadness in continuing to mourn the beloved late actor. As a result, the two dates feel irrevocably linked, with the movie acting as more than just the average Star Wars release — it's also something of a cinematic memorial to Fisher, too. It's final and powerful way for fans to say goodbye, which makes the cast reflecting on Fisher's presence in The Last Jedi feel all the more poignant.

In Rolling Stone's cover story about the ninth installment of the iconic franchise, director Rian Johnson reflected on Fisher's presence in The Last Jedi, and it sounds as though the actor is being honored in a way that fans will appreciate. Explaining Fisher's role in The Last Jedi has remained untouched, Johnson said, "We didn't end up changing a thing. Luckily, we had a totally complete performance from her." At the beginning of 2017, there was speculation that General Leia's plotline would need to be changed in The Last Jedi, with Fisher's appearance in the movie being digitally altered to accommodate those changes. Thankfully, none of that happened.

But with J.J. Abrams taking back the reigns to direct the tenth installment, fans will no doubt be anxious to see how he deals with the sudden absence of both Fisher, as an actor, and Leia, as a character. Addressing the difficult notion of Star Wars without such a pivotal woman, Abrams told Rolling Stone, "It's a sad reality. In terms of going forward ... time will tell what ends up getting done." It's still impossible to speculate as to how he'll tell that particular story.

However, fans should take solace in the way that other members of the cast and crew speak of Fisher in the Rolling Stone story. Though the actor may be physically absent from proceedings, she's clearly still a major part of Star Wars, and everyone who works on and watches the movies. And from how her friends and colleagues still talk about her, that's clearly always going to be the case.

It's incredibly touching, for instance, to hear Mark Hamill turn an anecdote about his minuscule role in The Force Awakens into a joke about feeling mad about not getting to enjoy screen time alongside Fisher. In recalling his first reaction to the movie script, Hamill told Rolling Stone, "What a rip-off, I don't get to run around the Death Star bumping heads with Carrie and Harrison anymore!" Meanwhile, Fisher pops up again in the piece during a conversation with Daisy Ridley regarding her 2015 statement that she was "cool with" being "Rey for life," in the same way that Fisher was always Leia. Ridley told the magazine,

"There are literally no similarities with Carrie's story and mine. A lot of Rey is me, but that is not me being Rey. That is parts of me being a character as Rey, because how could it not? So in that sense, I understand it, because so much of Leia is Carrie."

All of this means Fisher's presence still feels powerful within the Star Wars universe. The revelation that Fisher's performance has remained unchanged in the movie is as comforting as it is to hear Hamill still speaking of his old friend with as much fun and zeal as ever. It's also moving to hear Ridley reflect on her own career in a way that appears to reveal her reverence for the late actor, and some of the wisdom she may have imparted from her while working together. These are big statements made in small ways that are no less significant for it, and that means a great deal as the Star Wars franchise moves forward to the next movie.

With The Last Jedi, fans have an opportunity to make peace with the loss of a tremendous actor, and a colossal character, too. Leia may be absent from the tenth movie, but as Rolling Stone's story proves, there's no erasing Fisher from the spirit of the movie, or the people involved in creating it. Her force will always remain strong — even if she isn't running around the Death Star bumping heads with Hamill anymore.