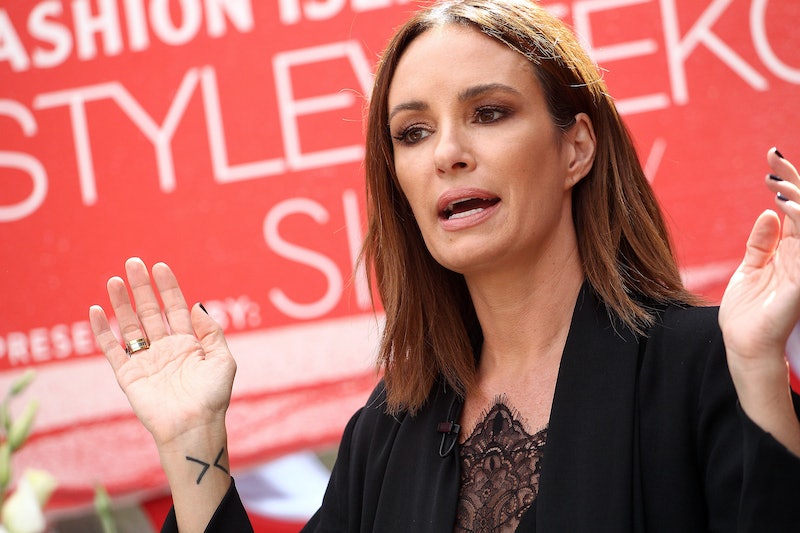 She may not know it, but TV host Catt Sadler is a gender equality icon. On Dec. 19, Sadler left E! over the massive pay gap between herself and co-host Jason Kennedy (who allegedly was making twice her salary). After being a diligent and dedicated employee for over a decade, hosting E! News, Daily Pop, and red carpet events, Sadler called time's up on the reportedly unfair pay discrepancy and left the company. Her decision has had people talking since, and in the best way possible. At the Women's March 2018 in Los Angeles, Sadler witnessed how her bold move has been actualized and tells Bustle why the experience was so surreal.

"It feels... I can't even put it into words," the 43-year-old says. Being among the thousands of women in the crowd showed Sadler how much impact she's already created. "I just marched for a couple hours and to just have complete strangers come over and just say thank you, it's very silly for me because it feels so, I don't know, it's an odd position to be in."

Although the experience is one the TV host is still trying to grapple with, she takes on her role with responsibility and pride. "They're introducing me to their daughters and we're getting pictures," Sadler recalls. And although she seems overwhelmed by all of the attention and support, she's channeling her energy into making a brighter tomorrow for women to come. "If somehow in some way I stand for [equality] now and it's a symbol of possibilities for other girls down the line, I mean, I will do it everyday the rest of my life."

While leaving E! was a huge personal decision for Sadler to make, being at the Women's March proved how her experience was not an isolated one. "I'm honored to even be in this position now, because the response only affirms how this type of disparity happens to the, not the every woman, but so many women," she explains. "That's why the response is so huge. It's not about me, it's about this happening to so many."

Celebrities like Debra Messing and Eva Longoria stood up for Sadler to E! at the Golden Globes (the night celebrities wore black in support of Time's Up). While Sadler showed her gratitude on those who've spoken out, she's insistent that there's still much to be done, by both men and women in the business:

"I wanna have more conversations like the ones that are happening, but on TV, on a visual medium, on the regular. Real conversations impacting change, influencing policies, the whole gamut, we can have all that. I want to be a part of that. I want to have influence over what might be done down the line."

When Sadler quit E!, the company gave a statement saying, "Catt Sadler and Jason Kennedy had different roles and therefore different salaries." Regarding Sadler and Kennedy's pay gap, a source told Us Weekly, "It has nothing to do with gender, but rather seniority and Jason’s ranking at the company.” Regardless of these defenses, Sadler has stuck to her guns. But she admits the decision was not an easy one to make.

"I stayed up at night knowing I was about to make the biggest, most difficult decision announcement in my career. But it was very much about my personal belief system and what I knew to be true, which was very wrong at that moment for me," she says. And she certainly didn't predict how huge her move would become and what it would mean to people. "How people responded, I mean, I couldn't have predicted. Ever. And I didn't start out on this crusade to be this voice for gender inequality. It was not a role that I asked for."

Now, Sadler happily and fearlessly accepts her new journey. "It is one that I will gladly take on and I'm humbled, I'm grateful." Women everywhere are lucky to have her, just as any TV network would be.