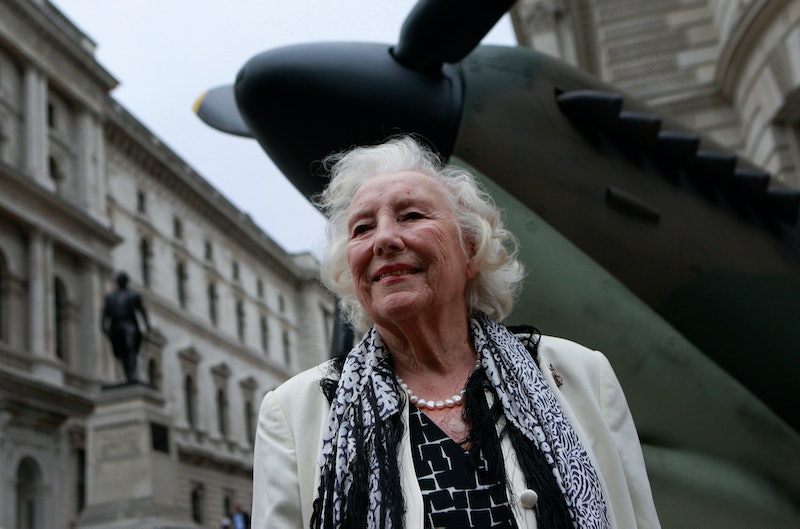 Celebrities and public figures including Prime Minister Boris Johnson, singer and West End performer Michael Ball, and Sir Captain Tom Moore have shared tributes to legendary British singer Dame Vera Lynn on Twitter after it was announced she had died on the morning of June 18.

Dame Vera’s family announced the news with a statement confirming “the passing of one of Britain’s best-loved entertainers.” It read: “Dame Vera Lynn, who lived in Ditchling, East Sussex, passed away earlier today, 18 June 2020, surrounded by her close family.”

Dame Vera is best known for her famous ballad 'We'll Meet Again,' the popularity of which has spanned generations, having first been recorded during World War II in 1939 and recently seeing a resurgence in the charts on the 75th Anniversary celebrations of VE Day. 'We'll Meet Again' has also become somewhat of an anthem for those struggling during the coronavirus crisis, as people have found its lyrics to be fitting for the era of social distancing.

Other famous tracks attached to Dame Vera include 'The White Cliffs Of Dover,' composed in 1941, and 'There’ll Always Be An England,' written and distributed in the summer of 1939.

Since the announcement of Dame Vera's passing, social media has become flooded with tributes to the late singer, including from a number of famous faces.

A representative for Captain Tom Moore, the 100-year-old WWII veteran who shot to international fame during the coronavirus crisis for his charity walk, passed on a message from him via Twitter. In it, Moore reminisced about how Dame Vera has helped him during his experiences in the war: "She had a huge impact on me in Burma and remained important to me throughout my life," the tweet read.

Other celebrities who shared condolences on Twitter include broadcasters Lizo Mzimba and Dan Walker, as well as Piers Morgan, Prime Minister Boris Johnson and leader of the opposition Keir Starmer. "Dame Vera Lynn’s charm and magical voice entranced and uplifted our country in some of our darkest hours," wrote Johnson. "Her voice will live on to lift the hearts of generations to come."

Singers Michael Ball and Alfie Boe also shared tributes to Dame Vera, with Ball calling her "incomparable" and Boe dubbing her "truly a national treasure." Throughout her life, Dame Vera was referred to as "the Forces' Sweetheart," a nickname that was referenced countless times on Twitter today.

Classical singer Katherine Jenkins, whose 'We'll Meet Again' charity duet with Dame Vera reached number 72 on the UK Singles Chart in April this year, shared a note on her Twitter. It read:

"I simply cannot find the words to explain just how much I adored this wonderful lady. Her voice brought comfort to millions in their darkest hours, her songs filled the nation’s hearts with hope, and her emotive performances, whether home or abroad, then or now, helped to get us through. It was she who chose the sentiments of her songs – she knew instinctively what people needed to hear, how to rally the morale and her spirit and strength created the soundtrack of a generation. There will never be another Dame Vera Lynn. Forces’ Sweetheart and our sweetheart. An icon. A legend. An inspiration. My mentor and my friend. I will miss you greatly and I know we’ll meet again some sunny day.”