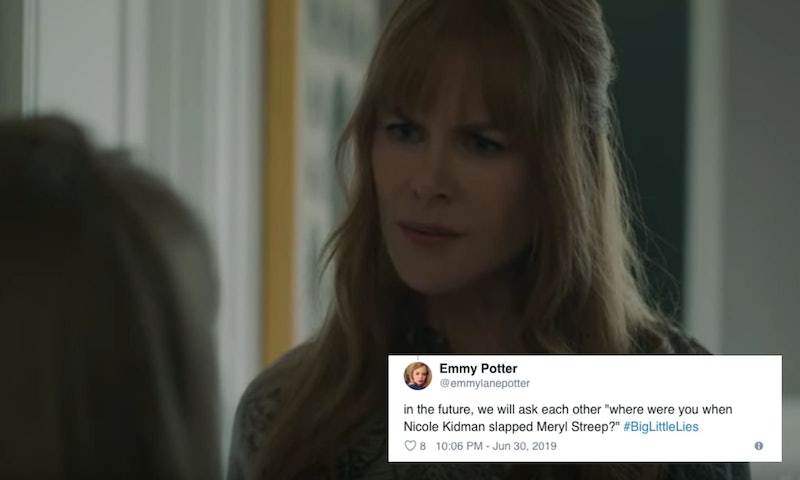 Spoilers for Big Little Lies Season 2, Episode 4 ahead. During the May 30 episode of Big Little Lies, Nicole Kidman slapped Meryl Streep. Do you need to read that again? Nicole Kidman, A-list actress, slapped 21-time Oscar nominee Meryl Streep. In the face. They were in character, of course — and Streeps' Mary Louise was in desperate need of something dramatic to shut her up — but it was nonetheless an iconic moment that's still reverberating across the internet.

Before Streep joined Big Little Lies's second season, she and Kidman were in The Hours together. But they didn't actually get the chance to interact onscreen in the 2002 film, so Big Little Lies more than made up for that missed opportunity. During Sunday night's episode, Mary Louise suggested Jane was lying about being raped by Perry, and then had the audacity to imply Perry must have cheated on Celeste with additional women. Celeste smacked her, and Mary Louise, knowing that Perry and Celeste's sex life had been violent, retorted sharply, "Well, shall we call that foreplay?"

Unfortunately, the slap only fueled Mary Louise's belief that her daughter-in-law is unfit to care for her kids. And it can only harm Celeste's chances of keeping Josh and Max in the custody battle Mary Louise has now served her with.

But Twitter doesn't have time to be concerned with the consequences of this slap. Instead, everyone is still wrapping their heads around the fact that the iconic Nicole Kidman just slapped the iconic Meryl Streep. It is only on Big Little Lies that this could happen.

More like this
10 Famous People You Forgot Guest-Starred In The Original 'PLL'
By Brad Witter
Watch The Trailer For Netflix’s Edgy New Comedy 'FAKES'
By Brad Witter
Here’s The True Story Behind 'A League Of Their Own'
By Morgan Leigh Davies
Does 'Locke & Key’s Ending Mean There Could Be A Season 4?
By Sophia Moore
Get Even More From Bustle — Sign Up For The Newsletter