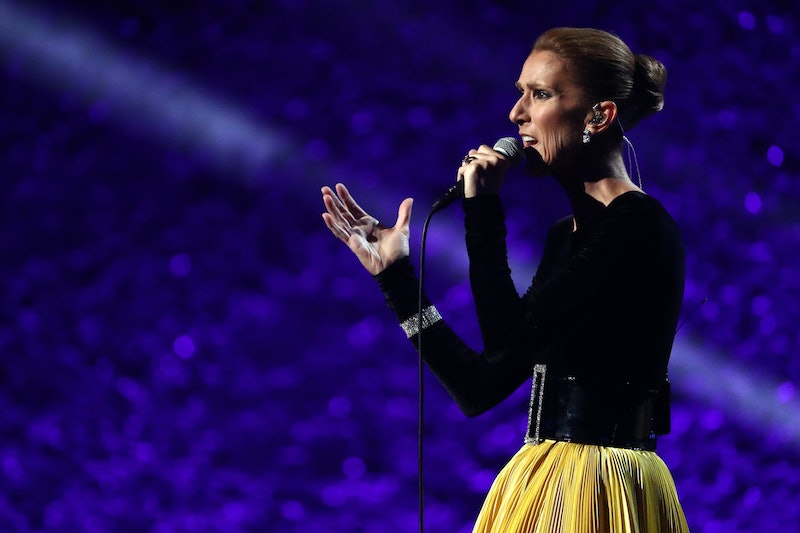 Lest anyone think she might take a break after her Las Vegas residency wraps this June, the human who gave us "Next-level Lady Gaga Concert Attendee" has a lot coming down the pike this year. Praise the Heart of the Ocean, there is a new Céline Dion album ahead. As the Associated Press reported, Dion took a moment during a special live event at the Ace Hotel in Los Angeles on Wednesday, April 3 to let the audience know that she is about to kick off her Courage World Tour and release a new record. Courage, which will be the inimitable powerhouse singer's 12th English-language studio album, is set to hit the physical and digital shelves this November. It will be her first album since her husband, René Angélil, died.

The last few years have not been easy on Dion. On Jan. 14, 2016, Angélil died after a long battle with throat cancer. A mere two days later, her brother Daniel Dion died after a battle with cancer of the throat, tongue, and brain.

Near the end of Wednesday’s show, Dion shared that these hardships, as well as her ability to "keep going," inspired the record's title. According to Billboard, when one fan asked why she called her new album Courage, she replied,

“I think I went through a lot. And life had given me the tools… to find my inner strength, to find courage, and to keep going. The people that I love so much embraced the moments that were difficult. They gave me so much strength. And then a song came that was called ‘Courage,’ and it didn’t take long for all of us to say, ‘I think the album should be called Courage.’”

And when speaking with Entertainment Tonight at the same event, Dion said,

"If you look at the definition of courage, it's a big, big word. It's an important word and everything that I went through the last three years for example, even before any past, I was not even sure if I was going to go and sing again. But [Angélil] would want me to sing again, so I went back and forth and it was hard."

The Courage World Tour will begin in Quebec City in September, and it will be her first world tour in a decade. According to the AP, she told the crowd that the upcoming album is “going to be the Celine that you know.” She continued,

According to USA Today, Dion said that while the new album will explore new sounds, she added, jokingly, "No heavy metal." Hey, if I am being perfectly honest, if Dion decided she wanted to rip through a speed metal track and throw it on Courage, I would not be upset. If there is one person who could deliver a metal scream for the ages, it's the fist-pumping queen of power ballads.