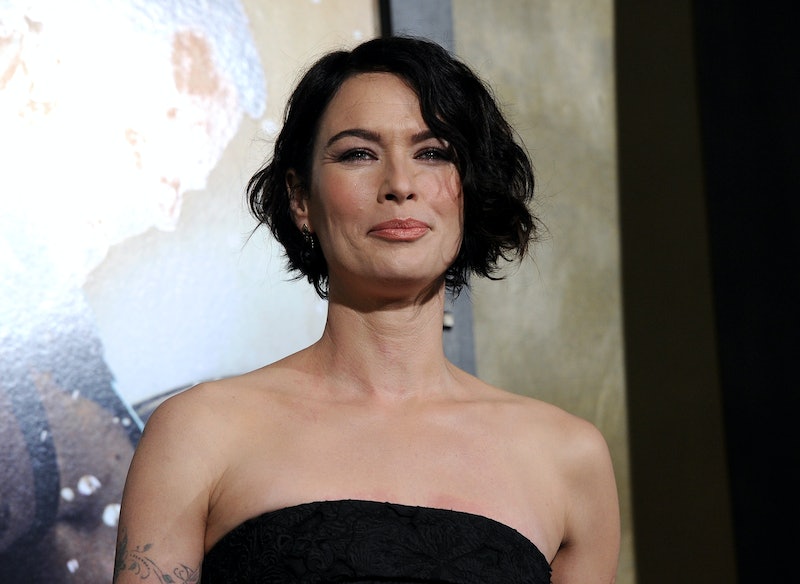 One of the remaining murky plot points in the final season of Game of Thrones centers around Cersei Lannister, who is pregnant with what she believes to be Jaime's baby — although she also let Euron Greyjoy believe the baby is his. During a recent appearance at a convention in Germany, Headey revealed that Cersei's pregnancy was supposed to end in a miscarriage, which she explained would have "served" the character better and cleared up the mystery of her baby.

According to People, Headey explained that the scene in question would have been included in Season 7, meaning that she would not have been pregnant at all in the final episodes. "We shot a scene that never made it into season seven, which was where I lose the baby," she recalled. "And it was a really traumatic, great moment for Cersei, and it never made it in."

Cersei first mentioned her pregnancy to Jaime (Nikolaj Coster-Waldau) in the fifth episode of Season 7, and later told Tyrion (Peter Dinklage) that she was carrying Jaime's baby. However, many fans were skeptical of the queen's claims, seeing as she proved herself to be a master manipulator over the course of the series. Cersei herself continued to use her pregnancy to manipulate the men around her in Season 8, when she told Euron (Pilou Asbæk) that she was pregnant, and let him believe that he was the father.

While the show left things murky about the legitimacy of Cersei's pregnancy for much of the final season, when she died in Jaime's arms in the Red Keep, Cersei told her brother that she wanted to protect the baby, which seemed to confirm that the queen was, indeed, expecting. And while her comments added an additional element of tragedy to the Lannister twins' sad fates, Headey admitted that she was sad that the show decided to change its original plans, and cut Cersei's miscarraige.

"I kind of loved doing that because I thought it would’ve served her differently,” Headey said at the convention. "Of course, we’re not exactly sure what made the show’s creators scrap the scene, but we can’t say it isn’t interesting to at least think about how that moment may have changed things."

It's possible that the tragedy would have added more depth and heartbreak to Cersei's story — after all, she lost all three of her children, so losing another one would likely completely devastate her — or it might have simply made it clearer that Cersei was simply manipulating the men in her life. Either way, like Headey said, it's very interesting for Thrones fans to consider how Cersei's story could have been different if the show's writers had decided to keep to their original plan.

In addition to being disappointed that the Thrones team decided to cut Cersei's miscarriage, Headey also recently admitted that she wasn't happy with the way that the Lannister twins went out in the final season. "I will say I wanted a better death," the actor said in an interview with The Guardian. "Obviously you dream of your death. You could go in any way on that show. So I was kind of gutted."

While she did acknowledge that the writers "couldn't have pleased everyone," Headey did confess in an earlier interview with Entertainment Weekly that she had been hoping that Cersei would die in the middle of a fight with someone, which would have been a more fitting ending to the show's biggest villain. "I wanted her to have some big piece or fight with somebody," she told EW, before revealing that after talking about it with Coster-Waldau, having Cersei and Jaime die together made the most sense for both characters.

"The more we talked about it the more it seemed like the perfect end for her. They came into the world together and now they leave together," Headey explained. "I think the important thing is that Jaime had a chance at freedom [with Brienne] and finally liberated himself from Cersei ... I think the biggest surprise is he came back for her. Cersei realizes just how she loves him and just how much he loves her. It’s the most authentic connection she’s ever had. Ultimately they belong together."

While it's easy to imagine the many ways the final seasons of Game of Thrones could have been drastically different, as Headey admits, it's hard to imagine a better ending for Cersei than having her die in the arms of the only person she's ever truly loved. Besides, it seems appropriate that the queen left Westeros leaving people just as unsure of her intentions as they were during her reign.