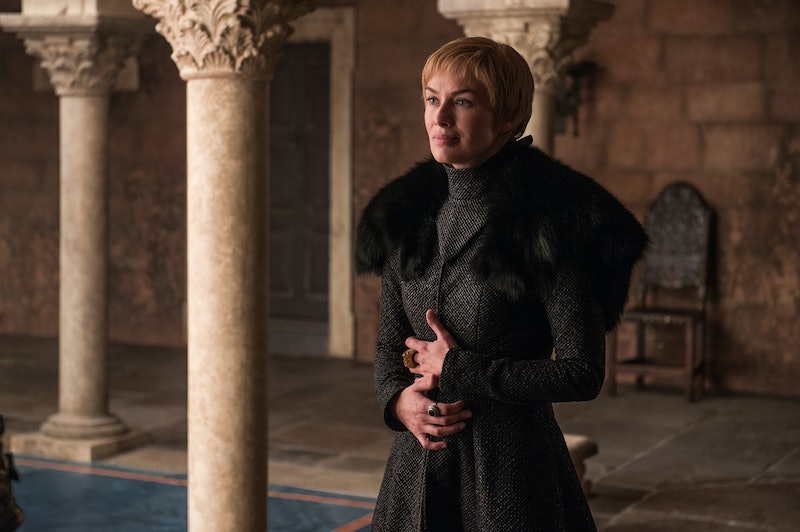 When Jaime walked away from Cersei in the Game of Thrones Season 7 finale, it was a significant move in the right direction for his moral compass. But he might also potentially be walking away from his unborn child. That is if Cersei is really pregnant on Game of Thrones. In the fifth episode of Season 7, she told her twin brother/lover that she was carrying their child. And she confirmed it again to their younger brother Tyrion in the finale. So far, Cersei has only used her pregnancy news to manipulate her two surviving family members. And with that in mind — plus, the fact that she's fully gone down the murderous villain path — it sure seems like she's faking her pregnancy. But the truth should be revealed when Game of Thrones Season 8 premieres on April 14.

Maybe, like Jaime, you believed Cersei immediately when she said she was pregnant with his child in "Eastwatch." Sure, believing anything Cersei says is foolish, but her love for her children and Jaime has always been an exception to her spiteful character. Yet, when you look at how she subtly "slipped" by revealing her pregnancy to Tyrion, you absolutely must question whether or not she is lying.

Cersei has a complicated relationship with her brother Jaime (understatement of the century). But she flat-out hates Tyrion, who killed their father and who she probably still blames for Joffrey's death even though she knows he didn't do it. So for her to show a softer side to Tyrion in their first one-on-one meeting since he killed Tywin doesn't make sense. Then, there's the fear she expressed about the White Walkers which leads to Tyrion's aha-moment. "All I could think about was keeping those gnashing teeth away from the ones who matter most, away from my family," Cersei said. "Maybe Euron Greyjoy had the right idea."

With Tywin, Joffrey, Myrcella, and Tommen all dead, Cersei really doesn't have that many people who "matter." Really, the only person — besides her alleged unborn baby — is Jaime. And as their final interaction in the Season 7 finale showed, she doesn't really care about him all that much either. So there's no way she was actually thinking about fleeing with her loved ones when she saw the wight. Instead, she saw an opportunity to gain the advantage over Daenerys. Because Cersei had plotted with Euron to have it appear as if he ran away when in reality he's going to secure more forces. So her whole belly-touching sentimental speech was undisputedly bull.

Now, just because she led Tyrion to the conclusion that she is pregnant doesn't mean she's lying about it. It's not like Cersei is above using an unborn child to gain power. But assuming she really is pregnant, it still doesn't seem likely that she'll have the baby due to Maggy the Frog's prophecy. As Melisandre proved with Stannis, prophecies aren't always correct. But what Maggy saw when she read a young Cersei's future has tracked so far. She ended up marrying the king and had three children with gold hair who all died before her. Maggy also said that Cersei would only be queen "for a time. Then comes another — younger, more beautiful to cast you down and take all you hold dear."

Cersei thought that Margaery was her younger, more beautiful replacement. But the woman who truly fits that description is Daenerys. After all, while Cersei was queen when Robert was alive, she really was only the queen consort (as in, the wife of the king) and had no official power of her own. So Cersei's current reign is probably the short stint that Maggy was referring to. So what does Cersei hold dear that Daenerys could take? Right now, the only things Cersei values are power and vengeance. But if she lost her baby in an incident related to Daenerys seeking the Iron Throne, that could also be the fulfillment of Maggy's vision.

Cersei has always been cruel, but her viciousness knows no bound ahead of the final season of Game of Thrones. So it seems far more likely that she's lying about being pregnant. And it's not just how she revealed it to Tyrion. In retrospect, the way she told Jamie she was pregnant also is a sign. She dropped the information right after Jaime had met with Tyrion. While she seemed relatively cool about it at that time, she accused Jaime in their last interaction of Season 7. So there's no way she had any lovey-dovey dreams of raising their child together after Jaime had so thoroughly betrayed her.

In the end, Cersei's alleged pregnancy probably won't matter all that much since, as Jaime pointed, "Our child will never be born if the dead come south." But the status of her pregnancy in Season 8 will give insight into just how despicable Cersei has become at the end of Game of Thrones.