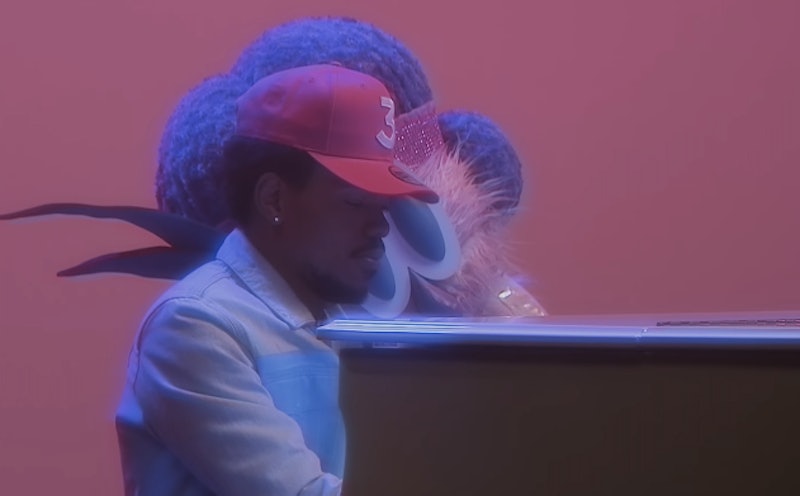 He spent the entire election season as a crusader for justice, and now he's gifting us with something a little less serious within these new tumultuous times. Chance the Rapper just released the music video for "Same Drugs" off his Grammy-nominated mixtape Coloring Book and it is a somewhat trippy collaboration that features a great seriously voice in music right now and... muppets?

The video, which initially debuted on Facebook Live on Monday, was going to be held up for a week before Chance decided that nah, it's coming out for real. "I changed my mind Same Drugs video drops at 3:30 Chicago time today, thanks Facebook for letting me do that on such short notice," he announced on Twitter. Bustle reached out to Chance's reps for comment on the change, but did not hear back in time for publication.

But hey, if you didn't catch the premiere the first time around, you get to immediately witness its weirdness and goofiness on YouTube. After Chance streamed the video on Facebook Live, the stream seemed to be deleted on the platform and the was released on YouTube as an unlisted video.

Chance is at his piano bathed in dusty rose lighting, and flanked, for the majority of the video, by an enormous puppet of an undisclosed animal. Oh, and weirdly enough this muppet sounds like Eryn Allen Kane (who is heavily featured on the track). It takes a weird, snowy detour off set and the world Chance walks out in is totally surreal.

Watch the video below and experience the awesome puppets for yourself.