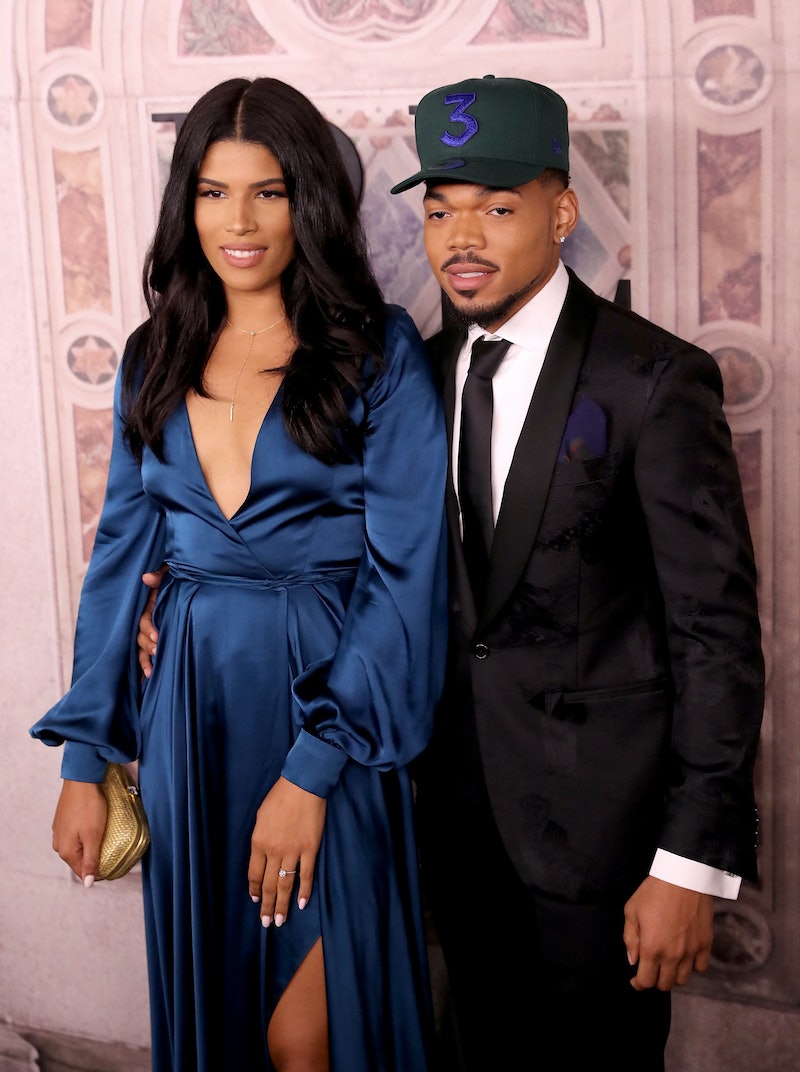 Time to grab your tissues because Chance the Rapper just shared how he met his fiancée, Kirsten Corley, in a very sweet story on his Twitter account. And once you read it, chances are, that you're not going to be able to hold back the tears. The Chicago-born rapper took to Twitter on Wednesday, March 6, to share the nostalgic timeline of meeting his soon-to-be wife at a work event for his mother's real estate company when he was just nine years old. The entire tale is just too cute for words as the 25-year-old chronicles the first time he laid eyes on a young Corley.

Chance began by sharing an adorable photo of his future wife, which he reveals was taken that night, showcasing her dimples and curly pigtails. He explained in a tweet, "So this photo was taken on the day that I first met my wife!" and shared that his mother had taken he, his brother, and father to the event where they were treated to a performance by three young girls. The entertainer, who was born Chancelor Bennett, says the year was 2003 and trio was gearing up to perform Destiny's Child's hit sing "Independent Women Pt. 1." Reliving the moment, which he says he can recall in a "photographic manner," Chance said he realizes that the singers are a little older than him but takes comfort in the fact that there are other children at the party. He explains that they "looked like angels," Charlie's Angels to be exact, and begins to recount how the beat lead into the song's iconic opening lyric and caused him to fall head over heels for his future wife.

"QUESTION. TELL ME WHAT YOU THINK ABOUT ME," he wrote in the tweet, recanting how the song began playing and then shares, "Now I'm locking eyes with the most beautiful girl I ever seen in my almost-a-decade on life on earth."

Chance wrote that as the group was performing flawlessly, he couldn't stop staring. But, it seems that his father had other ideas, urging his son who had won two school-wide talent shows for dancing to join-in the routine. However, that wasn't in the cards that night because Chance had his sights set on something far more important than any dance routine.

"This wasn't the time or place. Not just because it wan't my party, not because it was their moment to dance, not even because I was nervous about dancing in front of folks. It's because I knew I was gonna marry that girl. And I ain't wanna jump the gun."

After sharing his story, Chance reveals that the moment, which took place more than a decade-and-a-half ago, led him to this weekend when he is set to marry and dance with that very girl who stole his heart long ago: Kirsten Corley.

"So I shook my head with anxiety, moved to the back of the crowd and never even introduced myself. 16 years later its happening. This weekend is the time, and my place is my wedding. I'm going to dance with my wife because this is my destiny."

The longtime loves, who got engaged this past July, share a daughter named Kensli and have not revealed their wedding details to the public. However, one can almost be sure that there will be some Destiny's Child music playing at their reception.