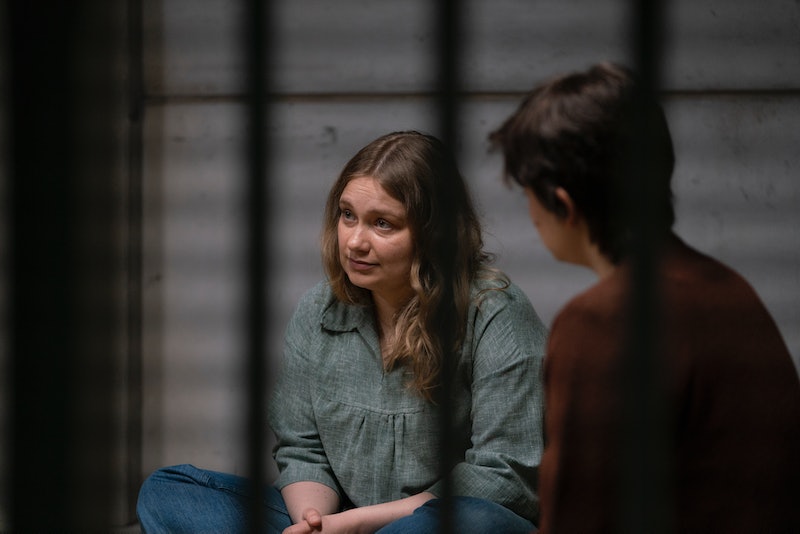 In Charlie Says, which is in theaters and on digital and VOD today, director Mary Harron and screenwriter Guinevere Turner explores a part of the Charles Manson story that's not often portrayed. The new movie fills in the gaps about what happened after some members of the Manson family were sentenced to prison following the Tate-Labianca murders in 1969. The movie uses a memoir of a then-criminology student named Karlene Faith, who spent time with the so-called "Manson girls," teaching them and helping to break them out of their delusion. This exclusive clip from Charlie Says shows how Patricia Krenwinkel (Sosie Bacon), Susan Atkins (Marianne Rendón), and Leslie Van Houten (Hannah Murray) still held true to their leader's beliefs even after their devotion to him landed them in jail.

Turner was able to speak to Faith before her death, as she tells Bustle, hearing firsthand what it was like to be in a room with these infamous young women. In the clip below, Faith, played by Merrit Wever, talks to Patricia, Susan, and Leslie about what Manson told them about the apocalypse, known to them as "helter skelter." The three Manson followers tell Wever about what "Charlie says" — hence the film's title — regarding the end of the world. One of those beliefs he preached entails that his followers will become "winged elves" in order to fly out of their underground bunker following the "revolution."

Faith's reaction to the women's stories would probably be yours to. Could these women truly believe that? The clip reveals that, while under Manson's influence, Patricia, Susan, and Leslie didn't often stop to question the things that Charlie said.

Speaking to Bustle, Harron explains that she wanted to make a film that might somehow explain how Charles Manson's followers believed in him so completely that they were willing to commit multiple murders on his behalf. "I think that was the most serious thing you could do, was to try to really go through it step-by-step to see how they got there," the director says.

In the same interview, Turner reveals that Faith didn't want to participate in the film — or any film — at first, unless it might help the real Leslie Van Houten get parole. The women involved in the 1969 murders were first sentenced to the death penalty, but then it was abolished in California in 1972, per PopSugar. Then they were given life sentences. Van Houten, now 69, is now eligible for parole, per the New York Post, after being denied parole by a judge last year. As the AP reports, Van Houten was 19 when she participated in the 1969 murders of grocer Leno LaBianca and his wife, Rosemary.

Van Houten's lawyer, Rich Pfeiffer, said that this upcoming decision regarding Van Houten's parole will likely be her last chance, after being denied release from prison three times since 2016. "If the courts don’t release Miss Van Houten, she’s never going to be released," Pfeiffer said, per the AP. Krenwinkel will be eligible for parole in 2022, and Atkins died while in the Central California Women's Facility in 2009.

Perhaps Charlie Says will provide a new perspective into the way that Manson's manipulations led to the infamous murders of 1969 and even impact Van Houten and Krenwinkel's futures.

More like this
These 25 International Horror Movies On Netflix Prove Fear Is A Universal Language
By Bustle Editors
14 Women To Watch This Oscar Season
By Marina Watts
An Extremely Messy Ranking Of What Actually Happens In 'Don't Worry Darling'
By Chloe Foussianes
Paul Mescal, Man Of Mystery
By Samantha Leach and Heather Hazzan
Get Even More From Bustle — Sign Up For The Newsletter