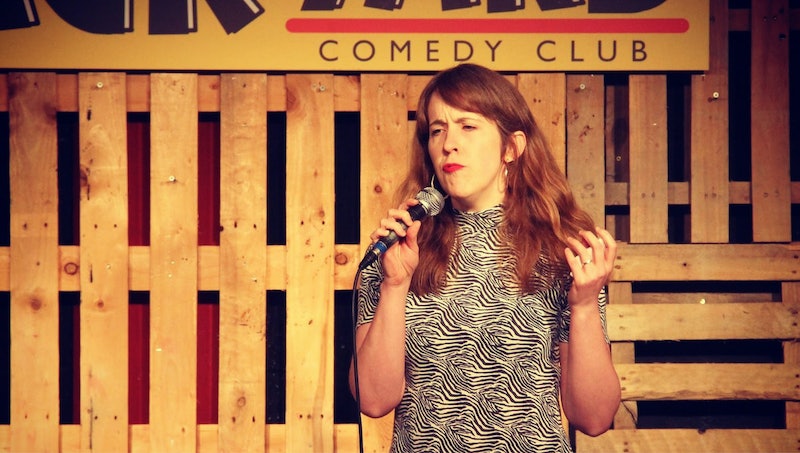 "Please welcome to the stage Samantha Neville." I bounce on to the tiny platform that the MC is generously calling a stage, and take the microphone out of the stand. I’m nervous — more so than usual. Tonight I’m going to talk about my mental health, on stage, to a room full of strangers. To try and make them laugh.

"A funny thing happens when you tell people you’ve got depression," I start with. The room is silent. Uncomfortable. "You lose the right to be melodramatic." I pause, and a take a look at the faces of the 30 or so people in the audience in this dingy pub basement. They’re quiet, waiting to see where I’m going with this. "So if I roll my eyes and say 'oh god I’m so bored I’m going to kill myself,' people take that seriously. And it’s hard to get a meeting back on track once Sandra from accounts has called the Samaritans." It stays quiet for a beat, and the nerves crash back in. Why did I think this was a good idea? But then, thankfully, the laughter comes.

I’ve always found it hard to talk about my mental health difficulties. Telling the doctor I thought I needed anti-depressants. Talking to a therapist about the patterns of thought that lead to spiralling panic. Admitting to a boss that I’m struggling at work. These have all caused a burning pressure in my throat that tells me tears and panic are not far away.

Taking something that’s caused you so much pain, and inviting others to laugh at it, fascinated me.

And yet I grew up loving an audience. From school assemblies to University debating club, I’ve always done well on a stage and behind a microphone. I can’t sing, dance or act, but I can make a clown out of myself, so trying out amateur stand-up comedy was an inevitable next step.

One of the hardest things about comedy is deciding what to write jokes about. The options are endless, but also very limited. What do I know about and care about? What have I experienced that I can also make funny, in a way that feels genuine? It’s not at all unusual for professional stand ups to make their names talking about their demons. Addiction, painful relationships, bereavement, and poor mental health have been the basis of some of the most simultaneously powerful and hilarious sets I’ve ever seen. Taking something that’s caused you so much pain, and inviting others to laugh at it, fascinated me. So I gave it a try.

And I found that somehow, with a spotlight on me, and the distance afforded by turning pain in to a joke, the terrifying heat of anxiety rising in the throat subsides. The words slip out easier when I know that they’re in service of a punchline. I get to temper the awkwardness with laughter. I’m in control of who knows, why they know it, and how they react. And since I’ve been talking about my love of a gin martini with a Prozac chaser on stage, I’ve found it easier to be more open about mental health even when I don’t have the armour of a microphone to hide behind.

Therapists don’t approve when you use an appointment as a really great chance to workshop some new material.

Cognitive Behaviour Therapy talks about practicing coping techniques in order to make them routine. Mindfulness and meditation also get easier and more effective with repetition. So it perhaps shouldn’t come as too much of a surprise that talking about my mental health difficulties — "admitting my weaknesses," as I’ve too often found myself thinking about it — gets easier each time I do it. And if starting out by doing it as a crass joke leads to an ability to talk about these problems more honestly, then so be it.

And yet, there’s something not completely honest about only addressing your mental health in search of a laugh. Therapists don’t approve when you use an appointment as a really great chance to workshop some new material, and perhaps this desire to joke isn’t healthy longer term.

I do worry that the sad sad tears of a clown shtick that I’m having so much fun cultivating could ultimately backfire.

In her incendiary stand up show Nanette — since filmed as a Netflix special that I cannot recommend highly enough — Aussie comic Hannah Gadsby takes the idea of using trauma as a source of comedy and hits it with a sledgehammer. She points out that in order to make a joke from a real life traumatic experience, you have to minimise your pain to make it funny. You have to self-deprecate.

"I put myself down in order to speak, in order to seek permission to speak, and I simply will not do that anymore, not to myself or anybody who identifies with me."

I do worry that the sad sad tears of a clown shtick that I’m having so much fun cultivating could ultimately backfire. I don’t want joking around to be the only way I’m comfortable taking about the darker, messier side of my emotions. But as a first step, as a way to get the words out at all, I’m convinced it’s helped me.

Whether that's letting friends know that I'm missing an event because of a bad brain day, or asking an employer to let me work from home, it's easier to raise the subject now that I've familiarised myself with doing it on stage. And occasionally, someone will open up about their own problems, so the chance to be a shoulder to cry on for them can be really rewarding. Plus, it helps me get loads of new material, too.

More like this
Forestcore Is About To Take Over Your TikTok FYP
By Sam Ramsden
Pret & Costa’s Coffee Is The Strongest On The High Street, According To Which?
By Sam Ramsden
Here’s What TikTok's "Mascara” Trend Is *Really* About
By El Hunt
Here’s Where The NHS Nurses’ Strike Currently Stands
By Sophie McEvoy
Get The Very Best Of Bustle/UK
Sign up for Bustle UK's twice-weekly newsletter, featuring the latest must-watch TV, moving personal stories, and expert advice on the hottest viral buys.