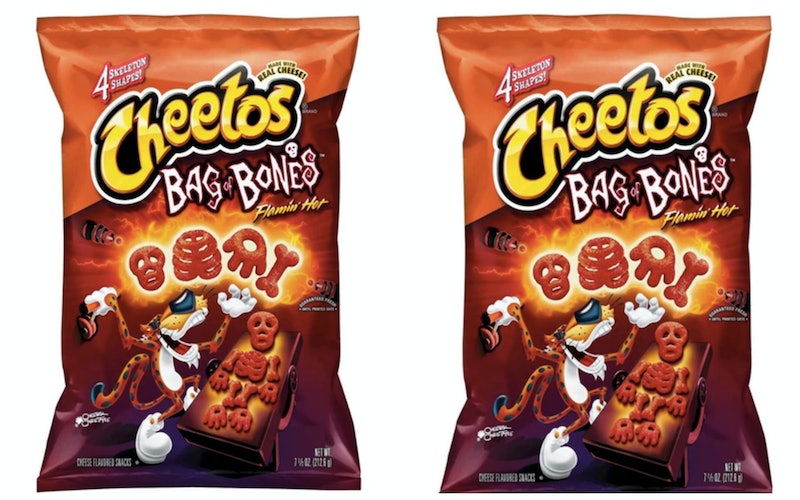 Normally, if you ask me what my favorite season is for sweets and treats, I’ll answer Valentine’s Day — not because I love the holiday (I very much don’t), but because candy comes in all the best flavors then. My opinion has been changing with each passing year, though — because Halloween’s specialty snacks have gradually begun pulling out more and more stops. For example, in 2018, Cheetos Flamin’ Hot Bag Of Bones have made their triumphant return — and even though Cheetos aren’t usually something I reach for, I’m finding it harder and harder to turn down this delightful treat. Because, I mean… it’s a literal bag of bones. My macabre little heart just can’t help but fall in love with the snack for that very reason.

Cheetos Bag of Bones have been around in one form or another since at least the Halloween season of 2014. Back then, they were White Cheddar-flavored — which, y’know, makes sense, given that they’re shaped like skeletons and all. Human bones may be many things, but bright orange due to the judicious application of Cheetos dust is not generally one of them. In 2016, however, Cheetos apparently decided, “To hell with realism!” and launched the seasonal specialty in the company’s ever-popular Flamin’ Hot flavor.

I will confess that I have never quite understood the devotion with which Flamin’ Hot Cheetos fans worship this specific snack; however, that’s largely because I’m not really a Cheetos person in general. In my own personal crunchy snack food hierarchy, puffed corn ranks below… well, pretty much everything — I’m a chip lover, with potato chips in particular forever reigning supreme. All hail the mighty kettle chip, heir to the throne of my kitchen pantry.

Even so, I fully recognize and support Flamin’ Hot Cheetos enthusiasts’ right to obsess over their snack food of choice — and as far as limited edition snacks you can only get around Halloween go, Bag of Bones is an A-plus option. The best part, you see, isn’t simply the fact that you can get a bag of bone-shaped Cheetos at this time of year; it’s that you can actually use the various pieces included in each Bag of Bones to build a full skeleton out of Cheetos.

Am I a 30-something, full-grown, mostly functioning adult? Yes. Do I still like to play with my food? Absolutely. And as these wonderfully creative folks have demonstrated, playing with your food is a joy that everyone should be free to experience, regardless of age.

How do bone-shaped Cheetos taste? Pretty much like regular Cheetos. As Junk Food Betty pointed out in 2014, the White Cheddar Bag of Bones are made of the same stuff the Winter White Cheddar Cheetos Puffs are; as such, you can expect them to taste mild and tangy. The Flamin’ Hot bones, meanwhile, are apparently more like Flamin’ Hot Puffs than Original Crunchy Flamin’ Hot Cheetos, according to Chip Review — but you can still expect to feel like you’ve been punched in the face by the flavor. As Junk Food Guy put it in 2016:

“That amazing Flamin’ Hot spice hid underneath the cheese and then came out and POPPED me in the face. Same familiar Flamin’ Hot flavor with a bit more intensity. That cheese dust storm I described before happened here and coated my mouth with tiny pepper knives that made my eyes water and made me cough a little bit. These. Were. AWESOME. It’s the Flamin’ Hot seasoning in a whole different delivery system, and I LIKE IT.”

From what I gather, this experience is the reason one eats Flamin’ Hot Cheetos in the first place — so if that’s your jam, the Bag of Bones version won’t disappoint.

According to Junk Banter, Cheetos Flamin’ Hot Bag of Bones are currently available at Target; in the past, they’ve also popped up at Walmart and on Amazon — although Walmart’s listings currently seem to be going through an existential crisis. Or at least, that’s my takeaway from the… unusual punctuation contained within them; how else does one interpret something reading “Cheetos? Bag of Bones? White Cheddar Cheese Flavored Snacks”? Anyway, the Flamin’ Hot variety will set you back around $3.79 for a 7.5-ounce bag at Target this year.

Now if you’ll excuse me, I have a cheesy biology lesson to plan...