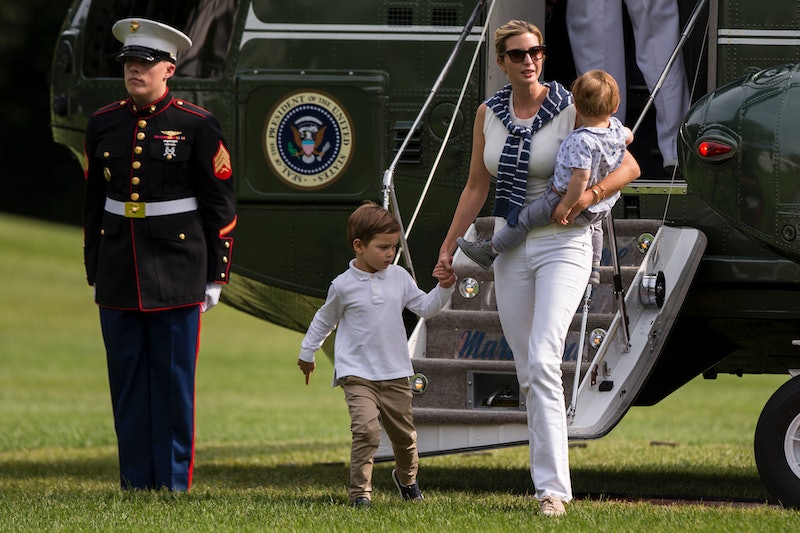 Before their parents became political rivals, they were friends with lots in common — famous parents, public upbringings, and young children. And now that they're older, Ivanka Trump and Chelsea Clinton talk about motherhood in incredibly similar ways. But the one way they differ greatly is that only one of them has a lot more power to change policy that could affect mothers — for now at least.

To start, Chelsea is a board member of powerful nonprofit organizations like the Clinton Foundation, while Ivanka is a senior adviser in President Trump's administration.

Through all of this, Ivanka and Chelsea have posted about motherhood, how they feel about their children, and how American mothers need more support.

But Ivanka's short time in government hasn't resulted in many pro-mother policies. The first year of the Trump administration was characterized by a rolling back of Obama-era gender-protection rules, including a birth control mandate in the healthcare law and a requirement that companies report how much they pay employees broken down by race and gender in an effort to close the pay gap.

On Mother's Day in 2017, Ivanka shared a New York Times article about how motherhood further skews the pay gap between men and women. The Times reported that women without children earn closer to what their male counterparts make than women with children.

Troubling stuff, right? But in May 2017, Ivanka was working at the White House in a role where she could propose policy that could work at closing the pay gap. But that role hasn't resulted in any meaningful legislation related to fair pay or gender equity.

In May 2017, Chelsea shared a story from New York magazine about a study that found mothers makes roughly 71 cents to fathers' one dollar. She shared the article a few days after Mothers' Equal Pay Day, the calendar date representing how many days after Jan. 1 mothers must work to earn the same amount a man made during the calendar year ending on Jan. 1. "In every state & at every education level, mothers are paid less than fathers. We must keep working toward #equalpay," Chelsea wrote.

The goals of having mothers earn more — or at the very least, not have their earning potential hampered by having children — is another thing the two women have in common.

Ivanka posts a steady stream of photos of her family on Instagram and Twitter. She and her children are also regularly photographed together by journalists covering her father's administration. This photo was posted by Ivanka on May 27 with a short caption: "My ♥️."

When Ivanka posted the photo, it was quickly ridiculed as being in poor taste. That's because the immigrant family separation crisis was at its peak.

By comparison, Chelsea rarely posts photos of her two young children, Charlotte and Aidan. However, Chelsea frequently writes about being a mother on Twitter and Facebook.

These women are incredibly similar — both were raised with wealth, access, and privilege. They even appear to approach motherhood in the same way, and both speak out about the economic problems facing their peers. As public figures, only time will tell how strong their influence will be.