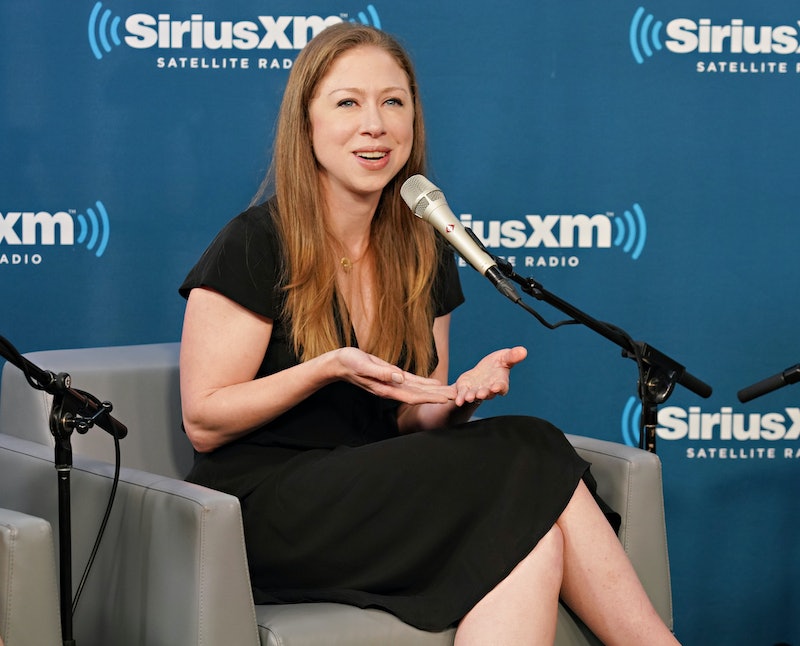 In a tweet announcing her fifth children's book about endangered animals, Chelsea Clinton told her millions of followers its release date, and revealed a preview of its cover. The book, which will be published by Penguin Random House, will be an animal picture book, according to her tweet, titled Don’t Let Them Disappear!

The book, which Clinton said would come out on April 2, focuses on 12 endangered animals and how humans can work on making the world more inhabitable for them. Generally, Clinton's books for children have centered on political activism. In another book titled Start Now! You Can Make A Difference, for instance, Clinton distills social activism down for children, making it easier to understand and possibly inspiring them to practice it.

Per the Associated Press, Clinton's upcoming book about animals will be illustrated by the artist Gianna Marino. The cover of the Don't Let Them Disappear will feature a giraffe, elephant, panda, tiger, and polar bear.

This won't be the first time that Clinton delves into the subject of animals facing the risk of extinction and what people can do for them. In Start Now! You Can Make A Difference, young readers also get to briefly study endangered species.

Don't Let Them Disappear will be yet another addition in Clinton's book-writing portfolio. In the past, she wrote It's Your World as well as She Persisted Around The World, which is a book about the "13 women who changed history" on a global level.

The former first daughter seems to have turned to writing for children in the more recent years. While she was touring for Start Now! You Can Make A Difference in October, Clinton discussed politics and privilege during a Q&A with her audience at her former school Sidwell Friends School in Washington, D.C. A young attendee in the crowd asked Clinton if she had faced tough times growing up.

Clinton responded, "I think right now is a rough spot for all of the things that I care about and all the things I think are important in the world. And yet I know it’s not really a rough spot for me because most of the horrors of this administration won’t change my life."

Still, Clinton said that in spite of everything she was trying to do her best. "I have to use every ounce of privilege that I have," she said, "to stand up for everything that I believe is right."