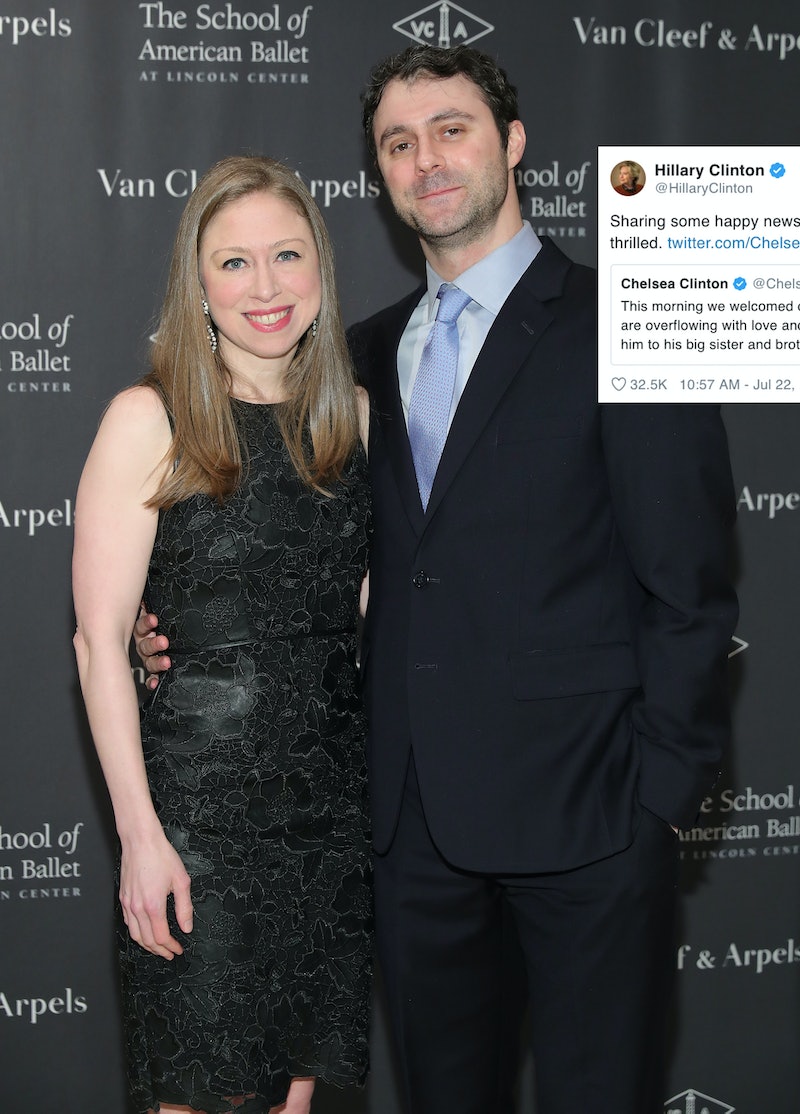 Kicking off the week with a dose of exciting news, Chelsea Clinton welcomed her third child with husband Marc Mezvinsky on Monday morning, July 22. The former first daughter announced the baby's arrival on Twitter and almost instantly was flooded with supportive and congratulatory messages from family members and followers alike. Clinton's third baby's name was also shared in the same tweet: Jasper Clinton Mezvinsky.

Noting how happy the parents-of-three are, Clinton's full message read,

"This morning we welcomed our son, Jasper Clinton Mezvinsky. We are overflowing with love and gratitude and can’t wait to introduce him to his big sister and brother."

And unsurprisingly, grandma Hillary Clinton chimed in about how excited she is for their family to expand. Quoting her daughter's tweet, Hillary wrote, "Sharing some happy news this morning! Bill and I are so thrilled." While HRC mentioned her husband Bill Clinton in her message, the former president posted a tweet echoing those sentiments: "Hillary and I are overjoyed and grateful to meet our new grandson, Jasper!"

Baby Jasper makes Clinton and Mezvinsky's crew now a family of five. They have a 3-year-old son named Aidan and a 4-year-old daughter Charlotte, as reported by JustJared Jr.

Besides Jasper's proud grandparents, John Legend and writer Roxane Gay were among the many to wish the famous family well. While the "All Of Me" singer stuck to a simple yet enthusiastic "Congratulations!!!," Gay humorously encouraged Clinton to "Enjoy the baby smell."

Back in January, Clinton announced her third pregnancy. And just like with the baby's arrival, she shared the big news via the social media platform. At the time, she tweeted out:

"Marc and I have loved watching Charlotte be such a wonderful big sister and we’re excited to watch Aidan become a big brother! We cannot wait to meet our newest addition later this summer."

Similarly, that pregnancy announcement included mentions of Charlotte and Aidan, which sweetly shows how much Clinton cares about making her other children feel included in this major milestone. They are a family, after all.

While Clinton's pregnancy announcement, and subsequent birth announcement, sparked plenty of congratulations online, she's also no stranger to Twitter trolls. A quick scroll through her feed shows that Clinton regularly shuts down negativity that comes her way on the platform, and usually does so by responding with pure positivity. Despite all that, here's hoping she's able to celebrate her baby's arrival in peace — without an unnecessary onslaught of hate from the internet.

It's incredibly clear that Clinton, her husband, their other two children, and her proud parents, Hillary and Bill, are thrilled about this new addition. So fingers crossed they share a full family photo with Baby Jasper on Twitter in the near future. Now that would be adorable.