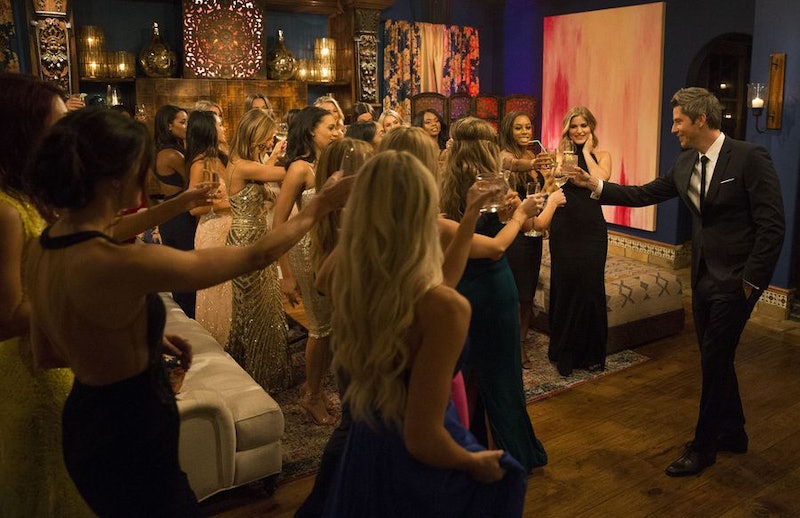 When you’re competing against 28 other women for a shot at just talking to the Bachelor, it definitely gives you a leg up to score the coveted rose. Chelsea made it known that she wanted a shot at the first impression — she was the first person to grab Arie once all of the limo arrivals were complete, and she was the first person to grab Arie for a second time, interrupting Krystal, just to make sure she got her point across that she wanted to know Arie. Arie seemed to like Chelsea’s forward nature. As he handed her the first impression rose, Arie said, “Even though you haven’t shared that much, I want you to open up and I want you to know that I’m here for you.” Swoon, right? Chelsea also got one of the first kisses of the night — another power grab!

Being a frontrunner on The Bachelor usually makes you a target, and in this case, the bull’s eye on Chelsea’s back when it comes to the other women is no different. She was called “aggressive” by no less than three of the other contestants, including Krystal, and Bekah, and a few others spent a few minutes sniping about how it wasn’t fair that Chelsea hung out with Arie twice in a night where a few women hadn’t sat with him at all. I believe the phrase used was “balls of steel.” It’s not fair, really, but it makes intrepid Bachelor viewers like myself ask, “Have you ever seen this show?” The whole point is to get time with the Bachelor, and if you don’t do that, you’re out. So you have to get time however necessary. Chelsea feigned surprise that some of the women hadn’t had time with Arie yet, but for what? She shouldn’t hold back for what she wants. She should own that she is looking to make Arie hers and be done with it.

Besides, Arie and Chelsea could be a pretty great match. Chelsea has a young son at home — she’s a single mother — and she said in her “meet-the-contestants” interview that she was glad that Arie was the Bachelor choice because she knew he was fine with kids. Arie’s first introduction into The Bachelor world was on Emily Maynard’s season of The Bachelorette, and Emily’s daughter, Ricki, was young at the time of filming. Arie almost won Emily’s season, and he wouldn’t have gotten that far if he weren’t OK with the prospect of having a stepchild. Chelsea wants a caring, loving male role model for her son, and Arie could be the perfect addition to her little family.

Of course, we’ll have to wait and see — it seems like Chelsea could be painted as the villain of Arie’s season of The Bachelor, and villains rarely, if ever, win seasons. The only recent “villain” edit who also won the whole shebang was Courtney Robertson in Ben Flajnik’s season, and they broke up shortly after the season was over. While you don’t go on a show like The Bachelor to make friends, Chelsea may need to make a few to succeed. But for now, she’s Arie’s favorite first impression, and that’s a great sign of things to come.