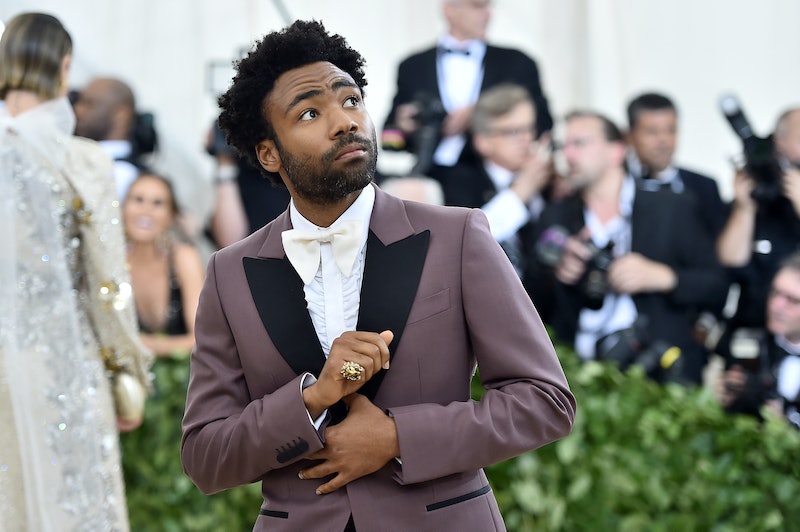 He's already blown the music world's mind once this summer, but why stop there? Childish Gambino released two new songs on Wednesday, because apparently the dude is incapable of just sitting back on his laurels and soaking up praise. The newly-released tracks dropped out of nowhere, bright and early on July 11, and are part of what Childish Gambino, also known as Donald Glover, has christened the Summer Pack, according to his own tweet announcing the drop.

And in case it isn't clear yet from the label and the July release that this new music is intended to be the soundtrack to your roof party or chill beach trip, the songs are titled "Summertime Magic" and "Feels Like Summer." According to Pitchfork, both pieces will be included on the artist's upcoming fourth studio album, which is also rumored to be his last. Or at least, his last under the Childish Gambino moniker — so don't freak out too hard. If there's one thing that Glover has proven over the years, it's that he's talented in many feels and full to the brim with inspiration, so it's unlikely that he'll go cold turkey on music.

The release date for his upcoming album has yet to be released, but instead of making fans wait around with nothing to bop to, Gambino decided to release two tracks straight to his own YouTube channel, without even messing around with a premium streaming service.

He announced the tracks simply, with a tweet of the phrase "summer pack" and linking out to a page where fans can listen to his new stuff. So far it's just the audio that's been released, with no word on when or whether music videos are forthcoming, but this is more than enough for now because these songs are killer.

At first glance, they both have a similar laid-back vibe, perfect to throw on at your summer party. But if you dig a little deeper, there are some subtle differences. "Summertime Magic" is exactly what you'd expect, with a bouncy beat and sunny, optimistic lyrics expressing summery-sweet adoration for an unnamed woman:

But as the music site Genius points out, while "Feels Like Summer" has a similar laid back vibe, it carries a much darker and more serious message. Where the first track in the Summer Pack is optimistic, the second is realistic, calling attention to the issue of climate change with lyrics that come in subtly at first, and grow more explicit. "You can feel it in the streets," he sings in the opening lines, adding, "On a day like this, the heat / It feels like summer." But then the message intensifies, calling out water scarcity, global warming, pollution, and bee extinction.

"Every day gets hotter than the one before / Running out of water, it’s about to go down / Go down / Air that killed the bees that we depend upon / Birds were made for singing, waking up to no sound / No sound"

The warning is hidden behind smooth vocals and a foot-tapping beat, so on the surface it sounds just like its predecessor on the EP. But as you can see, "Feels Like Summer" actually has more in common with a previous Gambino song, the critically-acclaimed and record-breaking "This Is America," released in May.

Childish Gambino's music is almost always deeper than fans might think upon first listen. It's a safe bet to assume that when you're listening to his music, there is meaning there, hiding just under the surface, and these new tracks are no exception. So throw them on at your barbecue, and thank Gambino for blessing fans with more tracks in advance of his album, but also don't miss the larger message of global responsibility.