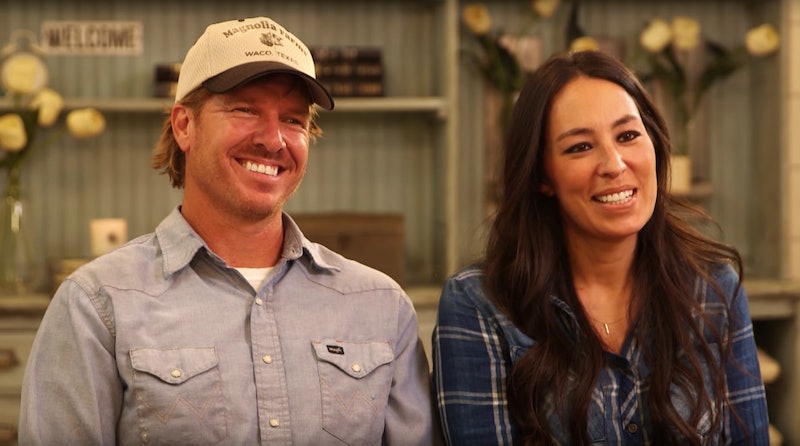 It's only been a couple months since their son was born, but in a new photo, Chip and Joanna Gaines reveal baby Crew has already been to his first football game. On Sunday, the couple both shared a picture on Instagram from the college game, which according to People, pitted Baylor University against Abilene Christian. Joanna shared a photo holding the baby, with the caption: "First game day for baby Crew #sicem." Chip also posted a photo, this one a selfie with the three family members, writing: "#gameday". It's clear that this is one family tradition the couple plans to establish early, and while Crew might have to grow some more before he can cheer for a team, the pictures are still so sweet.

Crew was born on June 21, and he is the couple's fifth child. He joined their family along with Emmie Kay, 8, Duke, 9, Ella, 11, and Drake, 13. The football game pic isn't the first peek at their new baby the couple has shared on social media. In July, Chip shared an adorable picture of his newborn son in his arms, writing: "My heart is full..". Joanna has shared several sweet photos since he was born as well. In early July, she shared a photo of Chip holding the baby in a rocking chair and revealed a longtime family tradition, writing: "Chip started a tradition with Drake where he wore the hospital bracelet until it fell off... looks like the tradition lives on. #5".

The former Fixer Upper stars announced that they were once again expecting a child in an Instagram post back in January. The picture showed Chip cradling a fake baby bump across from Joanna, and was captioned: "Gaines party of 7. (If you're still confused. WE ARE PREGNANT)." The couple had previously revealed in 2017 they would be stepping away from their popular HGTV show. According to People, the couple needed a break from the hit series, and planned to spend more time at home with family.

It seems the couple has been spending plenty of quality time together as of late, especially now that the newest member of the family has arrived. Earlier this month, Chip shared a picture sitting in a hammock with the new baby on the couple's farm in Waco, Texas. The caption read:" "#thegoodoldays". Joanna also shared a picture of Chip cuddling with Crew and Duke, captioning it: "Walked into this cuddlefest and my heart almost burst" with a heart eyes emoji. From laid back family moments to the couple's most recent Sunday spent at the football game, it's clear they are taking advantage of the time spent away from filming.

Of course, it's likely the home improvement stars will return to television some day. When the news broke that the Gaines' would be parting ways with HGTV, they promised fans that while they would no longer appear on the network, they wouldn't disappear, according to Vanity Fair. The statement read: "Who knows what the future holds, but we're excited for whatever is around the bend and, in the meantime, we will definitely be staying in touch."

However, it seems to be a time to step away from the spotlight and put family first for these reality stars. They're making sure that baby #5 keeps up with all of the family traditions, including becoming a football fan.