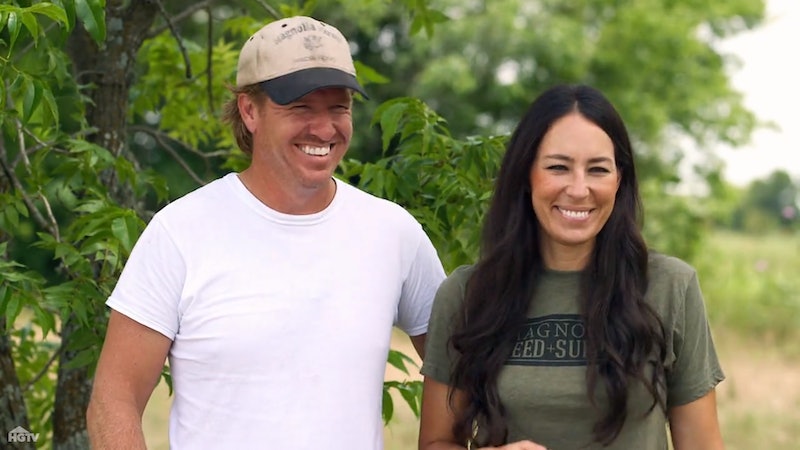 The stars of HGTV's Fixer Upper announced the birth of their fifth child on Saturday, June 23, and it seems that little Crew is settling in beautifully. In fact, Joanna Gaines revealed on Instagram that her husband Chip Gaines is keeping a family tradition alive for their newest addition. According to her post, when their first son, Drake, was born 13 years ago, Chip wore his hospital bracelet until it fell off. He continued doing this for their next three children, and he's keeping it going with baby Crew.

Joanna posted a sweet photo of Crew being cradled in his dad's lap. Chip's face is out of the frame, but his wrist is visible, and he's still wearing his hospital bracelet days after the baby's arrival. The mom of five captioned the picture,

"Chip started a tradition with Drake where he wore the hospital bracelet until it fell off... looks like the tradition lives on. #5"

Crew joins his big brothers — Drake, 13, and Duke, 10, — and his big sisters — Ella, 11, and Emmie Kay, 8. Just like his parents, the baby's siblings appear to be excited about having their little brother in their lives. Shortly after the baby's arrival, Joanna shared a photo of all of the kids meeting Crew for the first time, and, more recently, she posted an adorable photo of Ella and Emmie Kay taking their little brother stargazing.

In May, Joanna explained to People that the older kids are just as excited about their family expanding as their parents are. She said,

"I think it's sweet because they're older now, and I can see them wanting to be a part of this. We're all rallying around this baby, which I feel is a sweet gift to our family."

Since Crew's arrival, the Gaines' family has been all about keeping fans updated. In addition to Chip's special hospital bracelet tradition, Joanna also shared a shot of the baby's gorgeous nursery, and Crew's dad has been sharing his love of having a newborn in the house on Twitter. Chip also officially announced Crew's birth. On June 23, he tweeted,

"And then there were 5.. The Gaines crew is now 1 stronger! 10 beautiful toes and 10 beautiful fingers all accounted for, and big momma is doing great! #blessedBeyondBelief"

Before Crew's birth, Joanna explained to People that she's looking forward to soaking in all of her little boy's firsts — which is something that was a little bit difficult the first four times around. "I had four kids aged 4 and under. There were so many diapers, and it was chaos. Those years just flew because there was so much happening in the moment. I feel like I can really take this one in and relish these moments," she told the magazine.

Fixer Upper ended its five season run on April 3, but fans still adore the shiplap-loving Gaines family. They promptly launched a spin-off series, Fixer Upper: Behind the Designs, after their home improvement show signed off in April. Additionally, the family opened a restaurant in their hometown of Waco, Texas in February, and on April 24, Joanna released a new cookbook. In short, 2018 has been an eventful year for the family already, and there's still six months to go.

Even without the family appearing on HGTV every week — although they totally still do thanks to their spin-off and reruns — the Gaines' crew is never far from the hearts of their fans. And how could they be when they share so much of themselves, including their family's precious traditions? Here's hoping Chip and Joanna never stop sharing the love (or updates on little Crew).