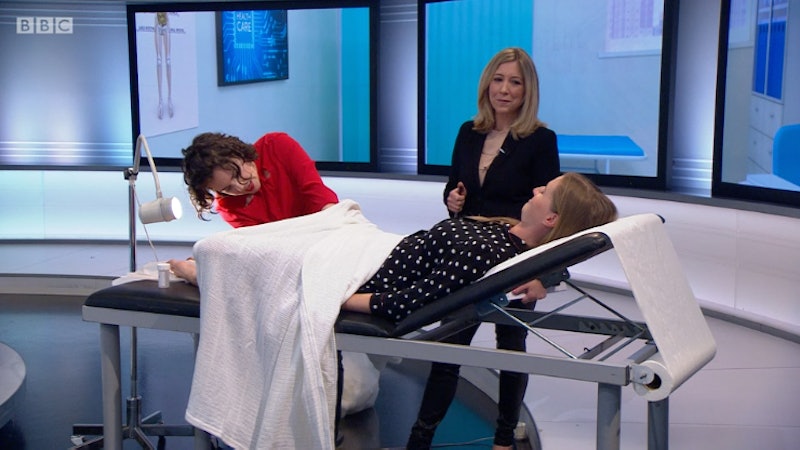 This week the UK has held its annual Cervical Screening Awareness Week in order to raise awareness and encourage people to go and get their smear tests done. There are so many reasons why you should book in for a smear test when you receive your letter, most important of which is the possibility to detect early cancerous cells in your cervix to prevent and treat illness. In order to raise awareness, Chloe Delevingne had a cervical smear on TV and her example proved how quick and easy the process can be.

Sadly, it was reported last year that one in four people with uteruses skip their cervical screening, after a survey was conducted by Jo's Cervical Cancer Trust. Even more unfortunately, the number fell to one in three among those who were aged 25 to 29.

So why are we all so afraid to get our smear test done? The study sadly found that the main issue was embarrassment and was related to body consciousness issues. Indeed, 35 percent reported being embarrassed to attend because of their body shape, including 50 percent who didn't end up going. Others had concerns about not having a bikini wax and the appearance and smell of their vulva. Other reasons for not attending included time restraints and a lack of awareness when it came to where and how to get the test done.

But the thing is, getting your test done is so super important, especially when it comes to detecting early cancerous cells. Robert Music, chief executive of Jo's Cervical Cancer Trust, explained: "Smear tests prevent 75 percent of cervical cancers." "It is a big worry," he continued, that the young, "who are most at risk of the disease, are unaware of the importance of attending. It is of further concern that body worries are contributing to non-attendance."

Having a smear test, however, isn't something to be embarrassed about. The nurses conducting the quick test — it really is super fast — are there to make you feel at ease. "The nurse's focus," explained Jilly Goodfellow, senior sister and nurse practitioner at Royal Victoria Infirmary, Newcastle upon Tyne Hospitals NHS Foundation Trust, is to make people "feel welcome, comfortable and ensure their dignity is maintained, while obtaining a good sample." She added that they achieve this by "talking" to the person while they are "fully dressed," so they're aware of "what is going to happen, [and explaining] reasons for the smear." They will also explain when they "will receive the result and what it will mean."

The test really does take a matter of minutes, as proven by Chloe Delevingne's recent smear test live on the Victoria Derbyshire programme. The on-air demonstration took a minuscule 30 seconds, with Delevingne experiencing no real pain or discomfort. She later agreed that the fear of the test itself and any pain associated with it, was far worse than the actual experience itself. In short: it really is a 30 second test that can save lives.

If you want to know more about exactly what happens in a smear test, the BBC has another useful short video.