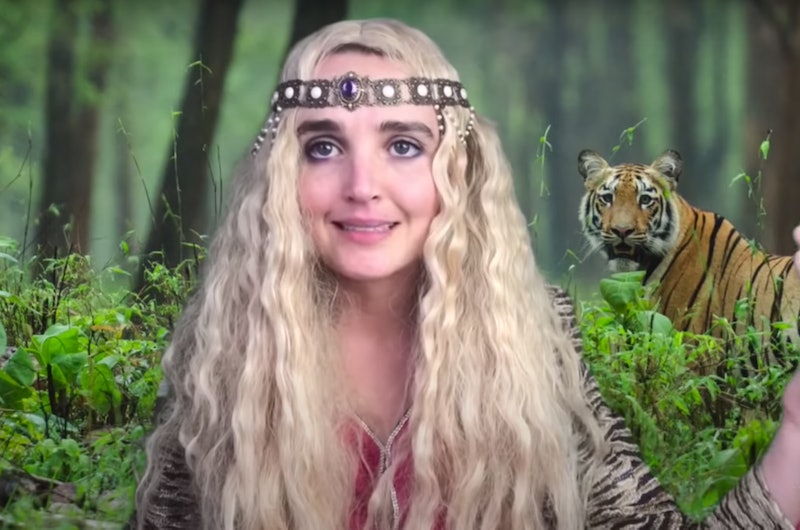 Tiger King continues to be a pop culture phenomenon, so it's unsurprising that there were plenty of Carole Baskin and Joe Exotic jokes on the remotely produced Saturday Night Live on April 11. Some of the SNL At Home Tiger King jokes included Chloe Fineman reprising her role as Carole Baskin for a musical number, and Tom Hanks making a reference in his opening monologue.

The true crime docu-series about exotic animal ownership turned out to be a tremendous hit for Netflix, amassing over 19 million views in ten days and completely surpassing Stranger Things' numbers in the same time period. Jokes about Exotic's auto-tuned country songs and Baskin allegedly killing her husband have become practically mainstream lingo at this point, and Saturday Night Live was glad to continue the conversation.

"Hey all you cool cats and kittens," Hanks said as his monologue opener, spoofing the way that Baskin was always seen opening her Big Cat Rescue vlogs in Tiger King.

This recognizable line also appeared again in Chloe Fineman's Baskin impersonation, which Fineman hinted at in a March 24 Instagram post. (There she was seen donning a bejeweled headband and saying, "Hey all you cool cats and kittens, it's Carole Baskin. Just took a kitty cat ride around my kitty cat meow meow kitty cat lake.") Fineman's impersonation was part of a skit making fun of MasterClass, an expensive app that features celebs teaching you about their craft.

The skit spoofed Timothée Chalamet and Jojo Siwa before moving to Fineman as Baskin, who promised a MasterClass in bicycle riding, of all things.

Fineman ended her segment by doing a musical number about bike riding, but of course she couldn't help but mention twice that "I didn't kill my husband."

Tiger King was also brought up again during Colin Jost and Michael Che's "Weekend Update" skit. Alec Baldwin called in with his Trump impersonation, and though he focused mostly on the ongoing novel coronavirus pandemic, he also threw in yet another dig at Baskin. "In times like this, we need to come together as one nation," Baldwin said. "No matter our differences, all Americans can agree on one thing: Carole Baskin definitely fed her husband to those tigers."

Tiger King has clearly found success during this shelter at home period, and with a new Tiger King episode coming out on Sunday, the Carole Baskin and Joe Exotic jokes likely won't be stopping any time soon.