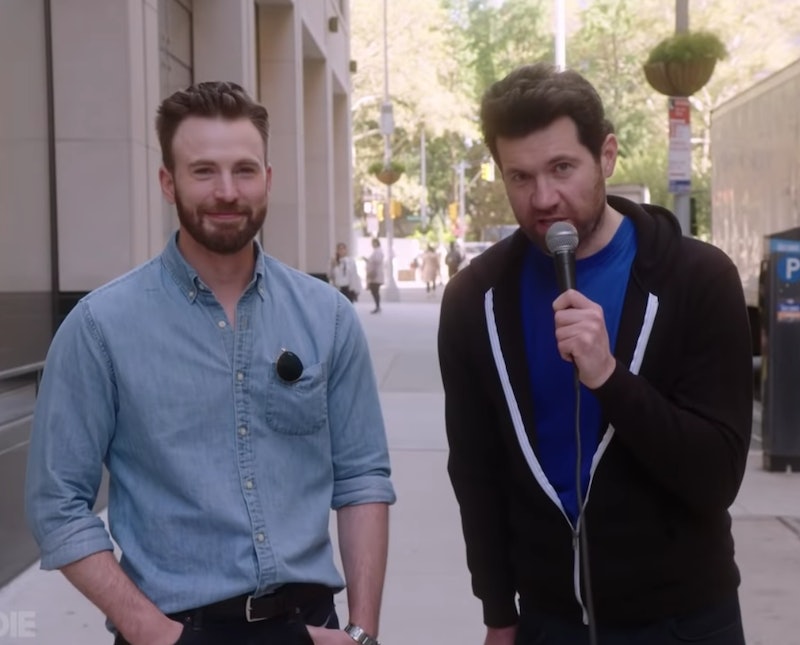 Billy Eichner is known for screaming pop-culture questions at New York City strangers on Billy on the Street, and Chris Evans is the latest celebrity to tag along for the game show. The Avengers: Endgame actor's episode was extra special, since it celebrated Billy on the Street's 15th anniversary and its recent move to Netflix. Throughout their four-and-a-half minutes together, Evans could barely keep his composure, especially when another Marvel superhero — Paul Rudd — made a cameo.

So many famous faces have accompanied Eichner on Billy on the Street over the years, including Amy Poehler, Sarah Jessica Parker, Chris Pratt, Lupita Nyong'o, Tina Fey, and the Jonas Brothers. During Evans' Billy on the Street episode that went live on Wednesday, the host approached people with a range of comments and questions that made the Knives Out star laugh. There was one amusing moment where a woman spoke to Evans and then snuck up behind him wanting a selfie, scaring him in the process. Eichner stepped in and said, "Gina Gershon over here trying to extend her moment. No, thanks."

Around the 3:20 mark, Rudd, who plays Ant-Man, arrived and Eichner appropriately shouted, "Oh, my god. Oh, my god. It's Paul Rudd!" It took a moment for Evans to realize his Avengers costar was actually standing next to him, but once it clicked, he looked genuinely excited about being joined by his former costar.

Rudd — who previously appeared in Season 3, Episode 5 of Billy on the Street in 2014 — joined Eichner and Evans for the rest of the segment. Eichner even asked one woman if she would rather have sex with Rudd or Evans for a dollar. She said Rudd, because "he's from Clueless and he's never aging." Rudd approached the woman, who screamed at the sight of him and then perfectly stated, "As if."

During Rudd and that woman's conversation, Eichner shoved Evans out of the way and told him to "let the pretty people talk." Despite Eichner literally pushing Evans out of the way when Rudd was around, it's safe to say his first time on Billy on the Street was a success.

More like this
Michaela Coel Has Some *Thoughts* About The Nepo Baby Discourse
By Maxine Harrison
Rupert Grint Just Shared A *Major* Update About Ron Weasley’s Future
By El Hunt
Everything To Know About 'And Just Like That...' Season 2
By Jack Irvin and Grace Wehniainen
The 2023 Super Bowl Commercials Feature A 'Breaking Bad' Reunion & Missy Elliott
By Alyssa Lapid
Get Even More From Bustle — Sign Up For The Newsletter
From hair trends to relationship advice, our daily newsletter has everything you need to sound like a person who’s on TikTok, even if you aren’t.