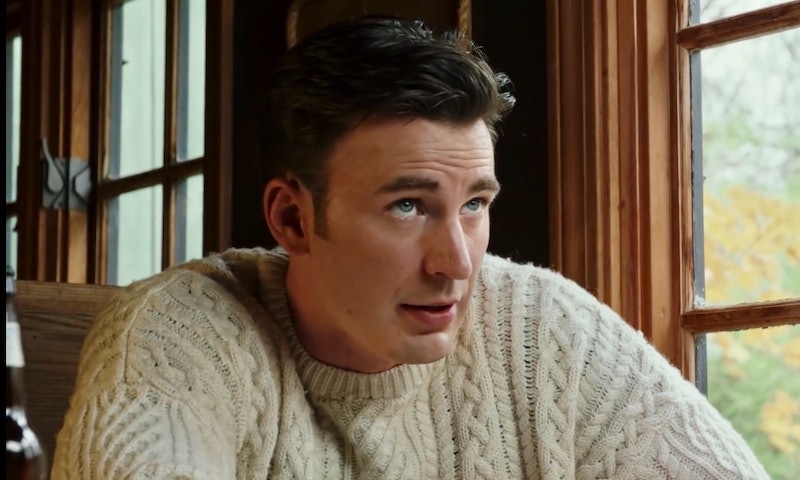 There's nothing ugly about this Christmas sweater. In honor of the Dec. 25 holiday, Chris Evans' dog got a Knives Out sweater, similar to the viral cable-knit pullover his master wore in the movie. The two adorable pictures of Evans' rescue named Dodger needed no explanation, as the actor simply added a Christmas tree emoji to the post, which had racked up almost a half-million likes within one day. Earlier the same day, Evans had also festively tweeted, "Merry Christmas everyone!!! I hope your day is full of love, joy, and gratitude!!"

Following the movie's Nov. 27 release, the sweater Evans' character, "spoiled playboy Ransom Drysdale," wore on the big screen became the subject of about as much conversation as the 2019 ensemble murder-mystery itself. (The Knives Out cast also includes: Daniel Craig, Ana de Armas, Jamie Lee Curtis, Michael Shannon, Toni Collette, Lakeith Stanfield, and Katherine Langford.) "The only thing I will say about Knives Out, is that, upon seeing Chris Evans in a sweater, the girl next to me gasped and said very softly and tenderly, 'Sweater,'" film reporter Anna Menta tweeted Nov. 6, following an early screening of the Critics' Choice and Golden Globe-nominated film.

The New Yorker summarized the frenzy on Dec. 18, pointing out that L.L. Bean is completely sold out of a similar version of the ivory sweater. The publication also cited a New York Post report that an almost-200-year-old Irish retailer, Blarney Woollen Mills, has seen a "hundred-and-fifty-per-cent increase in sales" of its Blasket Honeycomb Stitch Aran Sweater, since the movie hit theaters in November. Additionally, the official Knives Out Twitter account changed its name to "Chris Evans' Sweater Stan Account," for one day, and then gave away sweatshirts emblazoned with a movie still of a sweater-clad actor to 100 lucky followers.

Fans may never know the actual brand of the cable-knit sweater, however. As costume designer Jenny Eagan admitted to The Hollywood Reporter in November, she selected the piece in a rush and does not recall the actual fashion credit. She did note, however, that the knit "was a beautiful color with his eyes." She also joked to the publication that "wealthy people can always wear white — nothing ever gets dirty." (Evans, however, might be able to shed some light, as the actor revealed to People he kept "all the sweaters" post filming.)

It should come as little surprise that he'd dress his mixed-breed boxer in the best. As it turns out, Dodger easily could have inspired Evans' onscreen look. Along with a mirror selfie taken inside his trailer, the actor (wearing the infamous Knives Out sweater) tweeted in Dec. 2018 that he "kinda stole Dodger’s color scheme on set today."