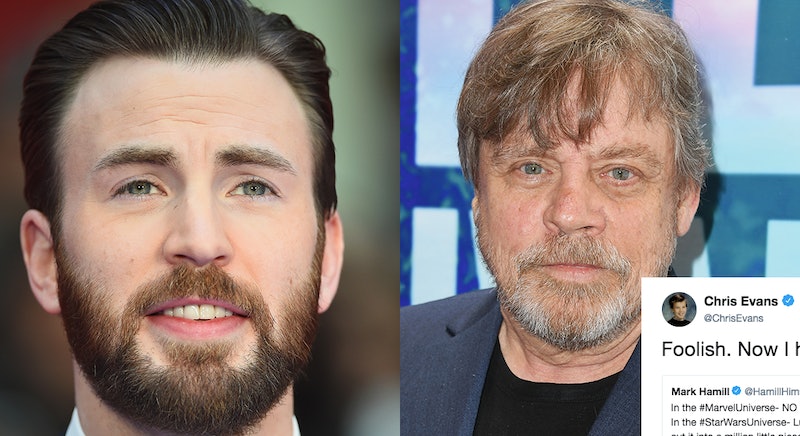 A Luke Skywalker clash with Captain America doesn't even seem possible in a galaxy far, far away. But Chris Evans and Mark Hamill's Twitter exchange on Wednesday, June 27, is sure to have Star Wars and Marvel fans battling over the age-old question: "Who would win in a fight ..." Of course the actor's who play both iconic characters had to lead the charge for their separate fandoms though.

So how did this hypothetical fight of good versus, well, good begin? As with most spirited discussions between friends, the debate all started with a meme. In the viral image, the following thought-provoking message is scrawled across a Post-It note: "My son just asked the toughest question that I've ever had to answer as a father ... "Can a lightsaber cut through Captain America's shield?" The text atop the photo also reads, "Great. Now I need to spend, like, eight hours on Tumblr and Reddit reading competing fan theories."

One enterprising fan — on a heroic quest for answers — decided to use the powers of social media to tag Evans and Hamill themselves. (OK, that power isn't quite as exciting as the ability to fly or teleport, but that's beside the point.) "I think it's time that we ask the experts on this one," the user wrote. "@ChrisEvans and @HamillHimself, what do you fellas think?? #AskingTheRealQuestions"

While fans rarely are able to catch the attention of their favorite celebrities on social media, Hamill AKA Luke Skywalker himself responded to the tweet. So could a lightsaber decimate Captain America's shield? The Star Wars Forces of Destiny actor responded: "In the #MarvelUniverse- NO In the #StarWarsUniverse- Luke wouldn't fight a hero, but if asked to do so, he could cut it into a million little pieces."

Not to be outdone, Evans AKA Captain America in Marvel's The Avengers franchise defended his honor. "Foolish," he responded on Twitter. "Now I have vibranium ninja stars."

Wait, what? Those not well-versed in the Marvel universe, may be asking: "What is vibranium?" So here's a quick primer. As any of the millions of people who saw Marvel's 2018 box office record-breaker Black Panther are well-aware, vibranium is a fictional impenetrable metal found in Wakanda of course. It's threaded through the Black Panther's suit and also powers the entire country. Since Captain America and Black Panther exist in the same world, as seen in Avengers: Infinity War, of course it makes sense that the Captain America shield is made from vibranium. So why not ninja stars, too?

While Star Wars' lightsabers are a little more self-explanatory, in the interest of helping fans make an informed decision, here's how the Star Wars website describes them: "The lightsaber is the weapon of a Jedi, an elegant weapon of a more civilized age. It can be used to cut through blast doors or enemies alike. Using the Force, a Jedi can predict and deflect incoming blaster bolts, and reflect them." Is your head spinning at superhuman speeds yet?

Back here on planet Earth, Hamill and Evans once actually joined forces in real-life. Well, sort of. Last December, in true good-guy fashion, they each separately came to the defense of young Tennessee student, who, in a viral video made by his mother, claimed he was bullied at school.

"Don't waste time wondering why a bully would be so mean," Hamill tweeted. "They're sad people who think hurting others will make them feel better because they really don't like themselves-They're just jealous because you're so smart & handsome. Your friend -mh,"

Evans even invited the boy to the Avengers: Infinity War premiere. Encouraging the boy to "stay strong," he also tweeted: "Don't let them make you turn cold. I promise it gets better. While those punks at your school are deciding what kind of people they want to be in this world, how would you and your mom like to come to the Avengers premiere in LA next year?"

There will never be a clear answer, of course, as to whether Captain America's shield is any match for Luke Skywalker's lightsaber, but what's certain is that Evans and Hamill are two good guys — and their playful Twitter banter will definitely get fans talking.