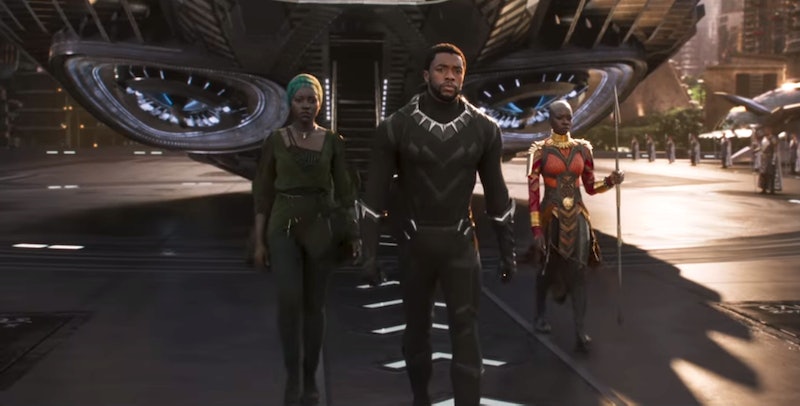 It's only been in theaters for 26 days, but Black Panther has already made $1 billion at the box office. According to Entertainment Weekly, by Saturday morning, the hit film had made $521 million domestically, and is on track to pass $500 million internationally this weekend. In other words, T'Challa's reign is showing no signs of slowing down, proving once and for all that Wakanda really is forever.

Joining the billion dollar club is no easy task for any film. In fact, Black Panther is only the 33rd film in history to cross the billion dollar milestone, and the fifth Marvel movie — it joins The Avengers, The Avengers: Age of Ultron, Iron Man 3, and Captain America: Civil War. The film isn't just a smash hit, it's also become a cultural phenomenon, and joined Wonder Woman in upending expectations about the kinds of superhero films that audiences will show up at the theater to see.

In the case of Black Panther, that's proven to be more than true. While T'Challa's journey has only been burning up the big screen for less than a month, there's already talk of a sequel — and fans definitely sound ready for a return trip to Wakanda.

The good news is, you won't have to wait long to see more of Wakanda or Black Panther. T'Challa's homeland will play a major role in Avengers: Infinity War, which arrives in theaters on April 27. Feige confirmed to EW that the entire third act of the film will be set in the fascinating fictional kingdom, and he even hinted that it could become another anchor point for the MCU, like New York City or Asgard.

Basically, Black Panther and the expansive world of Wakanda aren't going anywhere, and the film's box-office success has all but guaranteed that more stories will be set in this rich world in years to come. First, Marvel has to wrap up its phase three, but the future beyond that point is wide open — and not just for Black Panther sequels. T'Challa is one hero in a kingdom full of heroes, and although Marvel hasn't discussed the possibility of spin-offs just yet, it would be an absolute shame not to expand on a universe with so many strong, complicated characters in play.

Just as the possibilities for more Black Panther stories feels endless, so does the potential for the film to continue bringing in money at the box office. The movie just opened in China this weekend, and while there's plenty of competition heading its way, Black Panther's final box-office total is likely to be beyond the billion mark. EW reports that it's already on track to overtake Christopher Nolan's The Dark Knight by the end of the weekend — and that would make it the second highest grossing domestic superhero movie of all time. That's a major accomplishment — one that should make the cast, crew, and director Ryan Coogler proud.

Black Panther is the hero that so many people have been waiting for, and he's one that brings with him a cast of groundbreaking characters and a fully fleshed out kingdom. The cultural importance of the character truly can't be overstated, and seeing that reflected in the film's success could lead to more inclusive heroes making their way to theaters in the future.

That's a triumph that will make you want to shout, "Wakanda forever."

More like this
Lego Just Announced Its 'Black Panther' Set Release Date
By Maxine Harrison
The 50 Most Powerful Characters In The Marvel Universe, Ranked
By Johnny Brayson and Nola Pfau
Lin-Manuel Miranda & Tituss Burgess React To 'Little Mermaid' Casting Backlash
By Radhika Menon
Margot Robbie Breaks Her Silence On *That* Viral 'Barbie' Moment
By Maxine Harrison
Get Even More From Bustle — Sign Up For The Newsletter