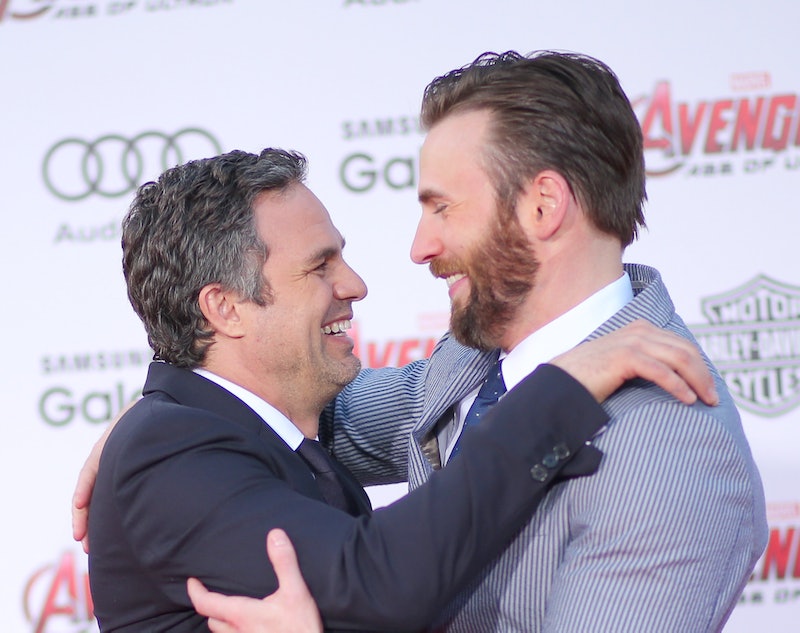 If you missed the original tweet, Ruffalo (aka The Hulk in the Marvel Cinematic Universe) wished his more than 5.7 million Twitter followers a Happy Fourth of July, adding emojis of fireworks, an American Flag and a peach. Wait, a peach? Well, the GIF he also included explained that one.

The attached video showed Evans in a scene from the 2001 raunchy spoof comedy, Not Another Teen Movie. His "popular jock" character, Jake Wyler, is seen sauntering down a school hallway, stopping to admire a portrait of himself hanging on the wall. In Ruffalo's GIF, however, the photo of Jake has been comically replaced with a closeup of Cap's spandex-clad booty. Evans' character, of course, gives the snap an approving nod and grin.

Marvel stans will, of course, remember the moment in Endgame when Paul Rudd's Ant-Man/Scott Lang refers to Cap's butt as "America's ass." Later, Cap, having knocked out his former self in a fight, agreed: "It really is America's ass."

Despite the stellar video manipulation, Not Another Teen Movie wasn't without it's own butt moment, courtesy of Evans. In a 2016 W magazine video, recalled having "a banana in my butt" in the flick, which he jokingly referred to as a "critically acclaimed Oscar darling." (He also wore a whipped cream bikini while parodying Varsity Blues, in the movie.) Given that it was one of his first major roles, however, he was game for whatever.

"In the beginning, everything's a plus, everything's a positive, so, in no way, do you think 'Should I do this?'" the actor shared with W. "It was just, 'The banana's gonna go in the butt. It's gonna be a silly day on set, it's gonna be funny, we're gonna laugh.' But you don't think twice about really anything at that stage. You're just really happy to be there — even if you've gotta put fruit in your pooper."

Even in actual critically acclaimed movies, he's managed to keep a similar sense of levity between takes — any beyond. Despite retiring as Captain America (Evans announced he'd officially hung up his shield in an October 2018 tweet), he and Ruffalo have kept their camaraderie — and playful prank wars — alive.

Last October, Evans trolled Ruffalo on social media, sharing an awkward teen photo of Ruffalo sporting a mouthful of braces. "It actually makes me furious that I can't hang out with this kid," Evans tweeted. The actor fired back at Evans, sharing the same caption — along with two of his costar's childhood school pictures.

All jokes aside, Evans did strike a more serious chord in celebration of America's birthday. Before he commented on Ruffalo's "America's ass" post, he tweeted:

"Happy 4th of July! A day that represents courage in the face of tyranny. Take a moment today to question how history will look back on this chapter. Time brings truth into focus. This period of fear, hate, lies and complicity will be studied by generations to come. 🇺🇸"

Evans, Ruffalo — and their social media exchanges — are all true American treasures.

More like this
Everything To Know About 'Scream 6'
By Jack Irvin and Jake Viswanath
Everything You Need To Know About The 'Knives Out' Sequel
By Grace Wehniainen
Chris Hemsworth Joked That Baring His Butt In ‘Thor: Love And Thunder’ Was A “Dream”
By Brad Witter
Natasha Richardson's Son Shared A Moving Confession About 'The Parent Trap'
By Sam Ramsden
Get Even More From Bustle — Sign Up For The Newsletter