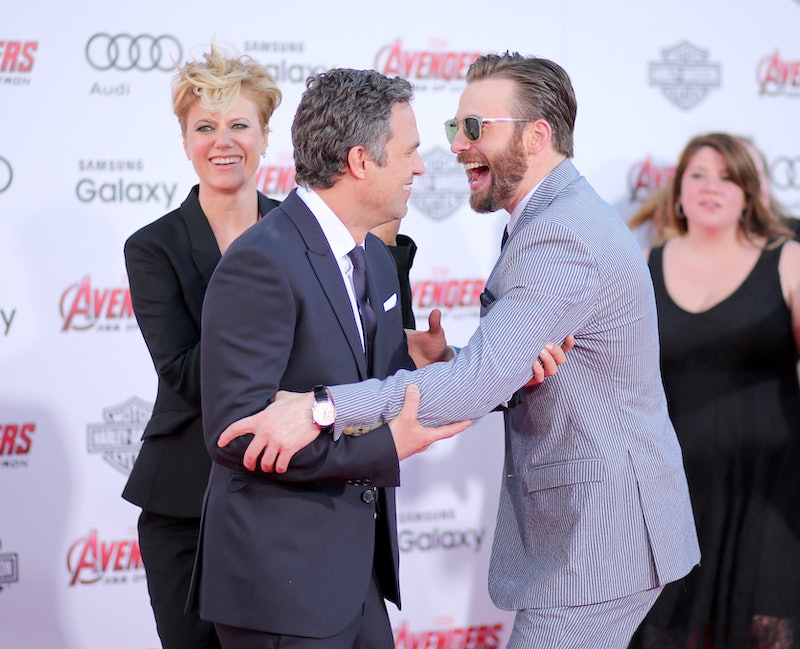 On America's birthday, it seems only appropriate to celebrate by honoring Captain America himself. Mark Ruffalo's Captain America-themed Fourth of July Twitter post will delight Endgame fans everywhere, thanks to its callback to one of the movie's most beloved jokes about Chris Evans' character.

Ruffalo kicked off the holiday by sharing a GIF of Evans from his breakthrough role in Not Another Teen Movie, which showed his character walking through the hallway and staring admiringly at a photo of himself. However, in this version, instead of seeing a headshot hanging on the wall, Evans walks up to a framed photo of Captain America's behind, and smiles approvingly. "Happy #FourthofJuly," the 13 Going On 30 actor captioned the post, along with a emojis including a firework, flag and — of course — a peach.

For those fans who haven't seen Endgame, the post references Scott Lang (Paul Rudd) referring to the Cap's butt as "America's ass," after coming face to face with Captain America circa 2012. Later, after current Cap knocks out his former self in a fight, he takes a look at his unconscious figure, before agreeing, "It really is America's ass." Who can blame Ruffalo, then, for wanting to celebrate that inspiring backside on the holiday?

While Evans has yet to comment on Ruffalo's post, the actor has often poked fun at his costar on Twitter, even inadvertently starting a social media throwback fight back in October when he posted an awkward adolescent snap of Ruffalo. "It actually makes me furious that I can't hang out with this kid," Evans wrote alongside a photo of the Oscar nominee rocking braces as a teenager. Ruffalo one-upped Evans a few days later, sharing not one, but two childhood photos of his costar, along with an identical caption.

Of course, Evans doesn't just have a good sense of humor about hid friends — he's also more than happy to make fun of himself and the early days of his career. In June, he shared his first headshot on Twitter as a throwback Thursday post, joking that "Apparently I was hoping to be cast as a d*ckhead. #TBT."

In addition to proving that he has a great sense of humor about his Avengers costars, Ruffalo's post also highlights the fact that Evans' Captain America — and his rear — will always have a place in fans' hearts. The actor appeared to hang up his shield at the end of Endgame, when his character, Steve Rogers, traveled back in time to reunite with his lost love, Peggy (Hayley Atwell), and lived the normal, quiet family life that he always wanted. In the final scenes of the film, he handed over his shield to Sam Wilson (Anthony Mackie), officially stepping down as Captain America and passing the mantle on to his best friend.

Back in October 2018, the actor shared an emotional goodbye note to Captain America on Twitter shortly after filming his final scene as Steve Rogers. "Officially wrapped on Avengers 4. It was an emotional day to say the least," Evans wrote. "Playing this role over the last 8 years has been an honor. To everyone in front of the camera, behind the camera, and in the audience, thank you for the memories! Eternally grateful."

Though Evans seems ready to walk away from being the man behind "America's ass," the Russo Brothers — who directed Endgame — recently teased a possible superhero story that would bring Evans' Cap back to the MCU. "If Cap were to go back into the past and live there, he would create a branched reality," Joe Russo told Entertainment Weekly in May. "The question then becomes, how is he back in this reality to give the shield away? Maybe there’s a story there."

Regardless of whether Evans reprises his role as Steve Rogers once more or not, it's worth saluting Captain America and his patriotic booty every Fourth of July. It is, after all, a true symbol of freedom and hope in these troubled times.