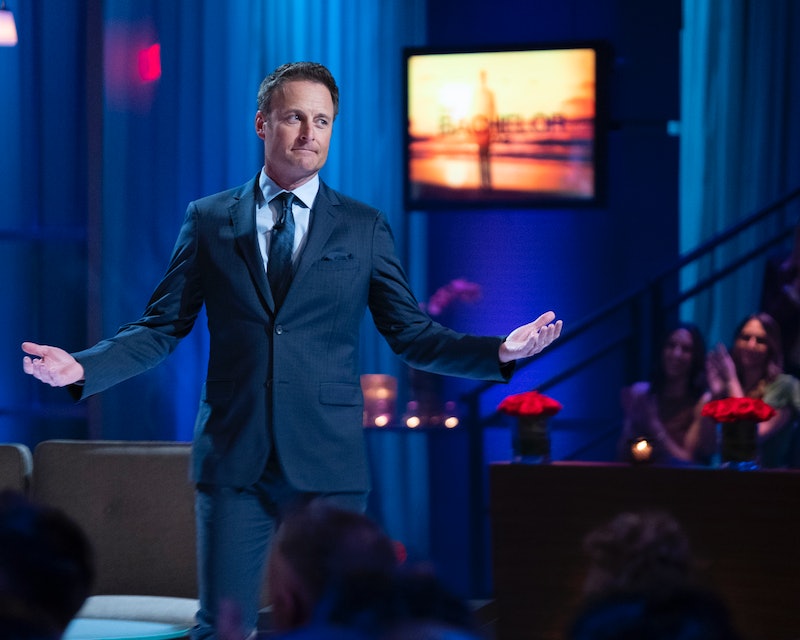 It's hard to believe, but The Bachelor is 17 years old. That's right, the reality dating show that started it all is almost eligible to vote. The Bachelor's first season premiered on March 25, 2002, marking the very beginning of what would become an international phenomenon. Host Chris Harrison celebratedThe Bachelor's anniversary by sharing the poster for the first season, and it shows just how much has changed for the series in the past 17 years.

"One man meets 25 eligible women and goes from great date to soul mate in six romantic weeks," the poster reads. It also features a man's hand holding up an engagement ring, and a woman's hand reaching out as if to accept the proposal. (Both of the hands also appear to belong to white models, unintentional proof of the franchise's lack of diversity.)

While engagements have been a traditional part of The Bachelor franchise, more recent seasons have shown that they're not a guarantee. The 2019 Bachelor Colton and his season's "winner" Cassie chose not to get engaged on the show, instead opting to keep dating. And before Colton's season, Bachelor star Arie proposed to Becca, only to realize he'd made the wrong decision. (He and his then-runner-up Lauren are happily married now, but it seems like a situation that could have been avoided without the show's pressure to end things with an engagement.)

The original Bachelor poster definitely looks focused on the proposal aspect of things. But as the show's proven over time, having people get engaged after such a short period of knowing each other doesn't always work out for the best. There are some Bachelor Nation couples who are still together, but many of them split up after the cameras stopped rolling.

The most recent two seasons, for example, showed that The Bachelor's fast-track to engagement isn't exactly foolproof. But Colton and Arie did find love with contestants from their seasons, suggesting that taking away the proposal aspect could actually help the show. (It also doesn't seem like a coincidence that many of the franchise's lasting couples, like Carly and Evan or Chris and Krystal, formed during Bachelor in Paradise, and not on The Bachelor or The Bachelorette.)

In honor of the show's 17 years on air, fans who are looking to relive some of the older seasons, even if only to see what's changed, can finally do so. The first seasons of The Bachelor and The Bachelorette will be streaming for free on Tubi, starting next month. So if you want to see how things all started, it's actually easier than ever.

Seventeen years ago, Harrison and ABC probably had no idea that The Bachelor would become as big as it is now. Between The Bachelor, The Bachelorette, Bachelor in Paradise, and The Bachelor Winter Games — not to mention the international Bachelor shows — the franchise is bigger than ever.

The Bachelor has changed a lot along the way, but that's not a bad thing, and there's definitely potential for another 17 years (or more!) ahead for the show.