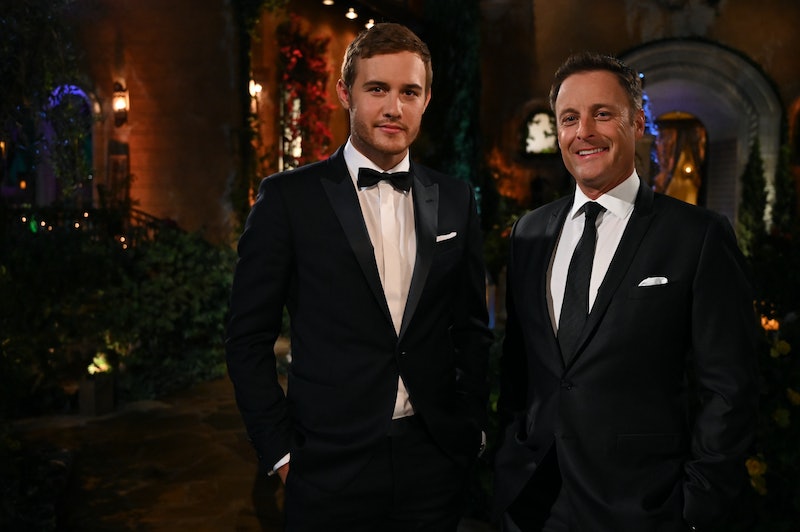 Pilot Peter Weber is in for a turbulent search for love on Season 24 of The Bachelor. In a new interview with The Hollywood Reporter, host Chris Harrison teased Peter's Bachelor season will have an unexpected ending. In true Harrison fashion, the host wouldn't offer up any concrete spoilers, but he did promise that there's nothing traditional about Season 24 — which could be good news for fans who loved Colton Underwood's last minute decision to follow his heart to Cassie Randolph sans proposal, or Hannah Brown ending her season of The Bachelorette happily single. It seems that The Bachelor is becoming less and less about who ends up with a final rose, and more about the complex realities that come with looking for love in the modern world.

As far as Harrison is concerned, the days of a "traditional" season are over. "I don't think there's ever again going to be a 'traditional' show. I think those days are long gone," he told THR. "People are going to speak their truth and live their truth. You're going to see that — the good, the bad, the ugly — on the show now. That's what the show is."

For Peter, that may mean keeping viewers guessing about which woman — if any — is his perfect match right up until the last second. Harrison promised that "you won’t predict how this comes to a conclusion." He added, "It's a wild ride. It is a turbulent, wild, emotional, gut-wrenching ride right up until the very end."

That all sounds suitably dramatic for Peter, who had his heart broken on The Bachelorette after having sex in a windmill four times. During Hannah's season, the pilot revealed himself to be unafraid of intimacy and more than willing to put his heart on the line. Those two qualities could explain why his Bachelor season sounds like it's going to be an emotional one.

On Dec. 3, Peter told People that he had no idea how complicated it would be to date more than one woman at a time. "There’s going to be no shortage of emotion," he said. "The experience was beautiful, but it was hard too. I don’t think I truly understood how difficult it would be to date that many women."

Adding in a surprise visit with his ex Hannah likely didn't make things any easier. ABC's promos revealed that the Dancing with the Stars alum will appear early in the season, and maybe even land an invitation to join the rest of the women vying for Peter's heart. It seems unlikely that she'll be sticking around since the season was filmed while she was dancing her way to victory on DWTS, but her appearance was necessary for the new Bachelor to move forward, according to Harrison.

"I think both of them, in their minds, had moved on. But it was also one of those relationships where, once they saw each other, maybe it wasn't as resolved and maybe they hadn't quite moved on," the host said to THR. "I knew it was an emotional conversation that needed to be had before he could really move forward and be the Bachelor."

From Peter's heart-to-heart with his ex to a potentially unexpected ending, Season 24 of The Bachelor is coming your way beginning Jan. 6 at 8 p.m. on ABC.